BRCA1/2 mutation carriers have lifelong increased risks of developing breast and ovarian cancer. Due to the lack of efficient ovarian cancer screening, patients mainly present when the tumors are at an advanced stage, and the long‑term survival is poor. The application of poly(ADP‑ribose) polymerase (PARP) inhibitors (PARPi) has been used in personalized cancer treatment. Specific strategies to improve the outcome of patients are available and mainly include targeting of BRCA1 or BRCA2 mutations. The aim of the present study was to report the case of a 67‑year old BRCA2 mutation carrier, who was enrolled in 2010 in one of the first PARPi studies (ICEBERG2). The patient exhibited second ovarian cancer (OC) relapse following a platinum‑free interval of 5 months. The third‑line treatment with olaparib monotherapy was initiated in January 2011, without prior surgery or chemotherapy, and achieved a persistent response. The patient demonstrated an unprecedented long‑term survival of >9 years under PARPi monotherapy after the second relapse of OC. The data of the present case report support the use of PARPi as a well‑tolerated and effective long‑term treatment, even for patients with unfavourable prognostic characteristics, such as platinum resistance, without immediately preceding optimal cytoreduction. However, further studies are required to provide more insight into the selection of patients for favourable maintenance treatment.

Ovarian cancer (OC) is the third most common gynecological cancer and the second leading cause of gynecological cancer deaths globally (1). The most prominent risk factor for OC is the familial accumulation of breast and/or ovarian cancer cases. On average, germline mutations in the high-risk genes BRCA1 and BRCA2 are detected in 42% of affected families with OC (2). The cumulative OC risk in patients who are 80 years old or older is 44% (95% CI, 36-53%) for BRCA1 and 17% (95% CI, 11-25%) for BRCA2 carriers (3). Patients with germline BRCA mutations demonstrate different clinical characteristics from those with non-BRCA-associated OCs, including younger age at diagnosis, advanced stage at presentation, high-grade histology and optimal response to platinum-based chemotherapy (4). Although BRCA1/2 mutation carriers show improved prognosis compared with non-carriers (5), approximately 70-85% of patients relapse. The median survival for patients with recurrent disease ranges from 12 to 24 months (6). The overall survival (OS) rates have not significantly increased for these patients over the past 30 years. The use of carboplatin and paclitaxel as standard chemotherapy was implemented in 2003. Moreover, surgical complete resection is recognized as the most important prognostic factor that can influence the outcome of the disease. Since 2003, no significant improvements have been achieved (7,8), and the initial attempts at targeted therapy did not achieve a breakthrough. This was dramatically altered with the introduction of poly(ADP-ribose) polymerase (PARP) inhibitors (PARPi), which are a new class of antineoplastic targeted agents (9). Their function is based on the concept of synthetic lethality with a defect of the homologous recombination repair (HRR) (10). Patients with germline mutations in BRCA1 or BRCA2 have profound deficits in homologous recombination (HRD) and, therefore, benefit the most in clinical trials with PARPi (11-13,15). It was recently demonstrated that patients benefit from PARPi regardless of their BRCA status or HRD (16).

In the present study, the exceptional case of a BRCA2 mutation carrier who was diagnosed in 2008 with advanced OC (FIGO IIIC; Fédération Internationale de Gynécologie et d'Obstétrique, version before 01.01.2014) is reported. Following the second relapse in 10/2010, the patient was enrolled in one of the first PARPi studies (ICEBERG 2, AZ D810C00042, AZD2281; KU-0059436; https://clinicaltrials.gov/ct2/show/results/NCT00494442?term=olaparib&recrs=e&cond=ovarian+cancer&draw=1&rank=2) and has remained recurrence-free for >10 years.

A 67-year-old Caucasian woman presented with an extensive relapse of a high-grade serous ovarian carcinoma (HGSOC) in December 2010 at the Centre of Familial Breast and Ovarian Cancer Cologne. The patient had a serum cancer antigen 125 (CA-125) level of 42 kU/l. In 07/2008, she was first diagnosed with HGSOC (stage FIGOIIIc, M0) and she underwent primary debulking surgery (median laparotomy with total abdominal hysterectomy, bilateral salpingo-oopohorectomy, omentectomy, appendectomy, dissection of pelvic lymph nodes, resection of the peritoneum) with complete tumor resection followed by standard adjuvant chemotherapy with six cycles of carboplatin (AUC5) and paclitaxel (175 mg/m²).

Following a platinum-free interval (PFI) of 12 months, the patient was diagnosed in 01/2010 with the first relapse and was administered re-induction chemotherapy containing six cycles of carboplatin (AUC5) and paclitaxel (175 mg/m²). After three cycles of chemotherapy, she developed a tumor-associated ischaemic covered colon perforation. She underwent a partial colon resection with end-to-end anastomosis and local tumour debulking, which showed histologically vital tumour tissue. She then completed chemotherapy with three further cycles until 05/2010. Her second relapse was diagnosed in 10/2010 following a 5-month PFI. Specifically, the patient developed progressive subdiaphragmal peritoneal metastases compared to 03/2010, newly diagnosed peritoneal metastases on the liver, ascites and right-sided pelvic nodular lesions, as well as metastastic spread below the abdominal wall 1.7 cm above the umbilicus (Fig. 1A-H). Since clinically there was no doubt about the presence of a second recurrence due to the tumour spread pattern, furthermore there was still no possibility of operating on the patient macroscopically completely tumour-free and as the patient was to be saved expected complications, histological confirmation of the second recurrence was not performed.

Due to her cancer history, which was associated with a significant familial cancer burden, a BRCA1/2 germline analysis was recommended. The patient suffered from bilateral breast cancer of the left side in 1987 and of the right side in 1999. She was treated with bilateral mastectomy and double CMF chemotherapy followed by endocrine therapy from 1987 to 1992 (20 mg tamoxifen/d) and from 1999 to 2002 (2.5 mg letrozol/d). Her family history indicated that one of her two dizygotic twin daughters, born in 1970, was diagnosed with a triple-negative breast cancer at the age of 38 years, and her maternal aunt was diagnosed with breast cancer at the age of 75 years (Fig. 2). The patient demonstrated a heterozygous pathogenic nonsense mutation (c.5857G>T (p.Glu1953X) in exon 11 of the BRCA2 gene (Fig. 3). Due to the mutation status and after obtaining her written informed consent, the patient was included in the ICEBERG 2 study (phase 2 study to assess the efficacy and safety of the PARPi olaparib for the treatment of BRCA-positive advanced OC) in January 2011, with 400 mg olaparib/2x per day prior to cytoreductive surgery or chemotherapy. The ethical approval regarding the inclusion of patients in the study was received from the Ethics Committee of the University Hospital of Cologne (EudraCT-Nr. 2010-022278-15, Protokoll-Nr. D0810C00042). During the first staging period, which occurred 8 weeks after enrollment, the patient exhibited a partial response as evidenced by CT imaging (small residual findings) and decreased levels of the tumor marker CA-125 (from 142 kU/l in January 2010 to 7 kU/l). Re-staging was performed every 8 weeks within the first 6-month period and subsequently every 12 weeks until the end of the study in November 2015. The assessment included CT of the abdomen/thorax and tumor marker controls (CA-125 and CA-153) without any sign of relapse (Fig. 1A-H). Since 2015, the patient has remained symptom-free and is subjected to regular tumor marker level measurements (CA-125 and CA-153, Fig. 4), which have been within the normal range (<35 kU/l). The results of additional examinations (haematology, clinical chemistry and urinanalysis) have also been within the normal range. Gynecological and physical examinations, including sonography, indicate no suspicion of relapse. The patient has remained relapse-free for 10 years (close-out visit: 12.07.2021, patient has given her written consent tot he publication of this case report). Therefore, PARPi therapy was associated with optimal efficacy and tolerability.

The 10-year complete remission following a second relapse of OC on PARPi monotherapy described in the present case report is exceptional. Unlike the present case, long-term survivors of OC usually display favourable clinical characteristics, including optimal cytoreductive surgery at diagnosis and platinum-sensitive disease, indicated by a recurrence-free interval of >12 months following first-line chemotherapy (17). The patient reported in the present study was diagnosed with second relapse 5 months after completion of a re-induction of platinum-containing chemotherapy and received neither surgery nor chemotherapy prior to the initiation of PARPi therapy.

PARPi provide maximum benefit in all clinical trials to patients with relapsed and platinum-sensitive OC with BRCA1 and BRCA2 germline mutations (gBRCAm) (12-14,20). Currently, PARPi therapy is indicated following complete or partial response to platinum-based chemotherapy (PBC), whereas it has been noted that, with each relapse, the response rates to PBC decrease. Second-line PBC achieves a response of 50-65% (21,22) compared with 11.9% of third-line chemotherapy (23).

In patients with advanced OC and germline BRCA mutations who have received at least two lines of previous chemotherapy, olaparib maintenance has been shown to prolong PFS compared to the placebo (median, 19.1 vs. 5.5 months; hazard ratio [HR], 0.30; 95% CI, 0.22-0.41) (14). An additional study on maintenance therapy with olaparib was conducted in a similar population and demonstrated a trend toward improved OS in patients receiving olaparib compared with placebo (HR, 0.73; 95% CI, 0.45-1.17). Moreover, the median OS was 34.9 months in patients with germline BRCA mutations. In the present study, 15 patients (11%) remained progression-free following 6 years on olaparib, although the mechanism of such a durable response remain unclear (24). The patient in the present study exceeded the median PFS reported in these trials, although she did not fulfil the optimal conditions (platinum-resistant OC, no prior surgery or platinum before PARPi). The BRCA2 mutation is a predictive factor for the response to PARPi therapy (12-14,20) and is most likely the explanation for the excellent therapeutic response. BRCA2-deficient cells are acutely sensitive to PARPi, as a result of their deficiency in homologous recombination. This is likely attributed to the lack of collapsed replication fork repair. Therefore, PARPi activity is essential in homologous recombination-deficient BRCA2 mutant cells (10), and mutation analysis is a central component in the treatment of OC patients and should be carried out for each patient.

The patient discussed herein had a striking personal and family history. However, approximately 50% of patients with OC, who are carriers of gBRCAm, do not have family history of ovarian or breast cancer, and may not be considered as candidates for germline genetic testing (25). The prevalence of deleterious germline variants in consecutive OC patients was 15.5 and 5.5% in the BRCA1 and BRCA2 genes, respectively (26). Moreover, the mutation prevalence in BRCA1 and BRCA2 depended on the age at onset (<60 y, 30.2% vs. >60y, 10.6%), positive family history (31.6% vs. 11.4%) and the histological subtype (HGSOC, 23.2% vs. other cancer types, 10.2%). However, a relevant proportion of patients carry mutations without fulfilling these factors, which renders genetic testing significant for all OC patients. The prevalence of deleterious somatic BRCA1/2 variants is 2-5%, while the vast majority of the deleterious variants found in the tumor was of germline origin (76.6%) (27).

Previous clinical studies have demonstrated that sensitivity to PARPi also occurs in tumor cells without gBRCA1/2m, indicating that the HRR pathway may be compromised by other mechanisms (e.g., mutation in other HRR genes and promoter methylation in BRCA1, PALB2 or RAD51C) (27). An estimated 50% of high-grade serous OC cases, which is considered the most common subtype of OC, has a deficiency in the HRR pathway (The Cancer Genome Atlas). Therefore, PARPi are beneficial in a much wider proportion of OC patients rather than only BRCA1/2 mutation carriers (28). The present case stresses the importance of genetic testing for patients with OC. Several trials are in progress in order to assess PARPi in patients with a wide variety of BRCA-associated tumors (e.g., prostate and pancreatic cancer), patients with tumors caused by mutations in other genes involved in HRR, and those patients without favourable clinical characteristics (e.g., platinum-resistance). The results of these studies may shed more light on the selection of specific patient groups than may benefit from targeted PARPi treatment. 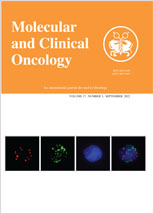