Massive ovarian edema is a rare gynecological entity resembling a solid ovarian tumor due to the accumulation of edematous fluid within the ovarian stroma. This condition can be easily mistaken for a neoplasm, resulting in overtreatment by removal of the whole affected ovary. The present study describes the case of a 28‑year‑old woman who experienced massive ovarian edema with paraovarian cyst torsion treated with laparoscopic surgery. The patient experienced lower abdominal pain lasting for 1 week and visited a local clinic. The ultrasonographic examination revealed two loculated ovarian masses and the patient was then referred to the hospital. Transvaginal ultrasonographic examination revealed a 77.9‑mm cystic lesion and a 57.7‑mm solid lesion in the left adnexa. A magnetic resonance imaging examination revealed a 55‑mm lesion with multiple peripheral ovarian follicles, which was isointense on T1‑weighted images and hyperintense on T2‑weighted images, and a 75‑mm cystic lesion, without a solid component, which was hypointense on T1‑weighted images and hyperintense on T2‑weighted images in the left adnexa. There were no observed abnormalities of the right adnexa or uterus. Laparoscopic surgery was performed, based on a clinical suspicion of massive ovarian edema with paraovarian cyst torsion. Intraoperatively, a paraovarian cyst was identified in the left adnexa that was twisted 360˚. The size of the enlarged left ovary was reduced to almost normal following the detorsion of the left adnexa. The final diagnosis was that of a massive ovarian edema, which was treated by resecting the paraovarian cyst, while preserving the whole left ovary. The pathological examination of the resected paraovarian cyst revealed a serous cystadenoma. Therefore, the present study suggests that the presence of massive ovarian edema should be taken into consideration when encountering a complex solid ovarian mass with multiple peripheral ovarian follicles, particularly in cases with a history of recurrent abdominal pain. 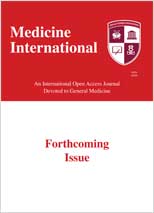