To date, at least to the best of our knowledge, there are only limited studies available on the endovascular treatment (EVT) of brain arteriovenous malformations (BAVMs) involving the anterior cerebral artery (ACA), thus termed ACA‑BAVMs. The present study retrospectively examined 60 patients with ACA‑BAVMs treated with EVT. The patients were aged between 10 and 72 years (mean age, 35.4±7.0 years) and included 28 females (46.7%, 28/60). The ACA‑BAVMs were divided into three types: Type I BAVMs were those located below and in front of the corpus callosum genu, type II BAVMs were those located at the upper area of the corpus callosum from the genu to the anterior portion of corpus callosum body, and type III BAVMs were those located from the anterior portion of corpus callosum body to the splenium of the corpus callosum. There were 9 (15%, 9/60), 15 (25%, 15/60) and 36 (60%, 36/60) patients with type I, II and III ACA‑BAVMs, respectively. Statistical analysis revealed that the posterior cerebral artery (PCA) tended to be involved in type II and III BAVMs. All patients were treated using EVT. During EVT, there were 3 cases of intraoperative bleeding (5%, 3/60), which tended to occur in type I and II ACA‑BAVMs. The other 57 cases (95%, 57/60) had no complications and new neurological deficits. At the time of discharge, 48 (80%, 48/60) patients had a Glasgow Outcome Scale score of 5. During the clinical follow‑up period, 47 patients were classified according to the modified Rankin Scale (mRS) score; 39 (83%, 39/47) patients presented with an mRS score of 0. On the whole, the present study demonstrated that EVT may be a safe treatment for ACA‑BAVMs.

Brain arteriovenous malformation (BAVM) is a common vascular disease. During the progression of BAVM, the feeding artery may become progressively dilated, thinned and tortuous. The nidus undergoes dynamic remodeling, during the process of which thrombosis or rupture can occur. In addition, the draining vein can become thickened and dilatated due to the continuous high pressure of blood from the feeding arteries (1,2). The typical angioarchitecture of BAVM is illustrated in Fig. 1. However, BAVMs at different sites have different characteristics (3).

BAVMs can occur in the supplying area of the anterior cerebral artery (ACA; thus termed ACA-BAVMs), which is located at the para-midline region of the cerebral hemispheres and is close to the medial veins of the frontal lobe. The posterior part of the ACA is closely associated with the deep cerebral venous system (4). ACA-BAVMs are distributed above the corpus callosum and may be supplied by the A2-A5 segments of the ACA (5).

A total of 60 patients with ACA-BAVMs treated with EVT from January, 2012 to January, 2020 were retrospectively identified at the First Hospital of Jilin University, Changchun, China, and analyzed. The present study was approved by the Ethics Committee of the First Hospital of Jilin University (approval no. 2020-341). Written informed consent was obtained from the patients or their legal relatives.

The inclusion criteria were as follows: i) The BAVM was located above the corpus callosum, at or close to the midline of the ACA supplied area; ii) the ACA was the main (if not the only) source of blood supply; iii) the patients had not undergone any EVT, open surgery, or radiosurgery prior to admission to the First Hospital of Jilin University.

Scheme and strategy of EVT

For thin feeding arteries originating at an acute degree from the ACA in type I and II BAVMs, the micro guide wire could be shaped into a ‘J’curve to pass the artery of origin. For type II and III BAVMs with multiple feeding arteries, if satisfactory EVT could not be achieved through the ACA, an additional EVT was performed through other arteries, such as the middle cerebral artery (MCA) and posterior cerebral artery (PCA).

GraphPad Software (8.02; GraphPad Software, Inc.) was used for statistical analysis. Continuous variables are expressed as then mean ± standard deviation. Ordinary one-way ANOVA followed by Tukey's multiple comparisons test was used for the comparison of multiple continuous variables. The Chi-squared test was used to compare count data. A P-value <0.05 was considered to indicate a statistically significant difference.

Main clinical data of the patients in the present study.

The results of statistical analysis are summarized in Table II. No statistically significant differences were noted in the diameter of the BAVMs, IVH presentation and deep vein drainage among the three types of ACA-BAVMs. Intraoperative hemorrhagic complications tended to occur in type I and II BAVMs (P=0.0223). PCA involvement was more commonly involved in type II and III BAVMs (P=0.0052).

Results of the statistical analysis of the imaging characteristics of the ACA-BAVMs.

BAVM is a common congenital vascular disease that is associated with the abnormal connection between arteries and veins, and lacks an intervening capillary network, which can occur in any part of the brain. The architecture depends on the location, recruited arteries and draining veins, and the size of the BAVM nidus (11).

The ACA lies between the bilateral cerebral hemispheres. It runs an anteroposterior course along the lower part of the cerebral falx and the upper part of the corpus callosum. Under normal conditions, the ACA system is relatively independent (12). In the case of chronic persistent ischemia in the ACA supplying area, the ACA can anastomose with the posterior choroidal arteries from the PCA or with the pial branches of the PCA. This anastomosis is often characterized by a direct anastomosis between the blood supply from the PCA system and the distal trunk of the ACA (13). Generally speaking, the MCA only compensates for the pial branches of ACA.

Some of the BAVMs can occur specifically in the supplying area of ACA, exhibiting a variety of vascular architectures (14). However, to date, to the best of our knowledge, there is no detailed classification of this specific type of BAVM. In the present study, based on their anatomical association with surrounding structures, the ACA-BAVMs were divided into three types.

The principle of EVT for ACA-BAVMs is the same as that for BAVMs in other areas, which mainly aims to manage flow-related aneurysms and the nidus of BAVMs to reduce blood flow to the draining venous system (6). In the present study, 6 cases had with flow-related aneurysms, with an incidence of 10%, which was lower than that observed in a previous study (16). This type of aneurysm is a definite risk factor of BAVMs and requires treatment (Figs. 3, 4, 5, 7 and 8).

The efficacy and safety of EVT for ACA-BAVMs was satisfactory, with a low complication rate of only 5% in the present study. In the present study, 85% of the cases had a GOS score of 4 or 5 at the time of discharge, and 89.3% of cases had an mRS score of 0 and 1 during the follow-up period, which indicated that EVT was a safe strategy for the treatment of ACA-BAVMs.

Following ACA-BAVM classification, EVT becomes strategic. Type I and II BAVMs are supplied by branches of the proximal ACA, and these feeding arteries are commonly slim and multiple. Microcatheter navigation close to the BAVM nidus is difficult, which increases the difficulty in performing EVT and the associated risks. In the present study, intraoperative bleeding tended to occur in patients with type I and II BAVMs. As type II and III BAVMs are supplied by the end of the ACA trunk, performing EVT is relatively simple. However, when they are supplied by multiple regional arteries, particularly from the PCA region, EVT may then be a complex process. In some cases, the PCA has to be used to perform the EVT as the PCA tends to be involved in type II and III BAVMs.

The present study has some limitations which need to be mentioned. One of these limitations is the low rate of angiographic follow-up. The efficacy and safety of EVT were presented as GOS and mRS scores at the time of discharge and clinical follow-up, which proved that EVT was a safe treatment for ACA-BAVMs. However, due to the very low rate of angiographic follow-up, it is inappropriate to compare the pre- and post-operative angiographic characteristics in this series of patients.

In conclusion, ACA-BAVMs can be classified into types I-III according to the position of the BAVMs along the ACA. This classification is helpful. For type I and II BAVMs supplied by slim and multiple branches of the proximal ACA, EVT is difficult to perform, and intraoperative bleeding complications are common. For type II and III BAVMs, as the PCA tends to be involved, in some cases, the PCA has to be used to perform EVT. On the whole, the present study demonstrated that EVT is a safe procedure for the treatment of ACA-BAVMs.

The present study was approved by the Ethics Committee of the First Hospital of Jilin University (approval no. 2020-341). Written informed consent was obtained from the patients their legal relatives.

The patients or their legal relatives provided consent and agreed for their data (shown in the figures) to be published. 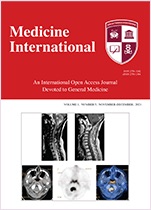