Fanconi syndrome (FS) can present with hypophosphatemia, renal glycosuria, hypouricemia and aminoaciduria. Phosphate depletion is the most critical clinical aspect of FS as it leads to osteomalacia. Some patients present with symptoms and signs related to hypophosphatemic osteomalacia (HO). Thus, these patients present with these symptoms and are misdiagnosed. From an investigation of the published literature, HO symptoms are found to be non‑specific and were thus misdiagnosed in various centers. The present study describes the case of a a 46‑year‑old male with FS who suffered from joint pain and was first misdiagnosed. After he was referred to the authors' hospital, his case was evaluated and following a consideration of the results of this evaluation, he was diagnosed with idiopathic FS with multiple osteoporotic fractures. Furthermore, the present study performs a brief literature review other cases of patients that were misdiagnosed and whose symptoms were later found to be due to HO are also discussed. It is hoped that the present study may increase the awareness of HO among physicians and may help to draw attention to such cases of patients presenting with non‑specific symptoms.

Lignac-de Toni-Debré-Fanconi syndrome [termed Fanconi syndrome (FS)] is a proximal tubular defect that causes an impaired reabsorption of the glomerular filtrate. Patients with this condition can present with hypophosphatemia, renal glycosuria, hypouricemia and aminoaciduria (1). While it is mostly observed as a hereditary disease in childhood, the acquired form is more common in adults (2). It is difficult to define the epidemiology of FS, as it includes a wide variety of acquired, inherited and exogenous factors unrelated to each other (2).

Phosphate depletion is the most critical clinical aspect of FS as it leads to osteomalacia. Some patients present with symptoms and signs related to hypophosphatemic osteomalacia (HO) (3). These symptoms, including proximal myopathy, muscle weakness, chronic arthritis sign, and bone and back pain are non-specific (4). Thus, these patients present with these symptoms and are misdiagnosed (5).

To the best of our knowledge, there are currently only a limited number of publications available on the topic, and the majority of these are related to drug-induced FS. In the study conducted by Eguchi et al (6), the 25 cases of FS reported an improvement in phosphate levels following the cessation or dose reduction of adefovir-induced FS. The case reported in the study by Park et al (7) involved a patient diagnosed with idiopathic FS presenting with HO. The study by Yamaguchi et al (8) also reported a patient who presented with HO on the grounds of primary biliary cirrhosis. Finally, in the study by Li et al (9), there were nine cases that were initially misdiagnosed; the majority of these presented with HO due to drug-related FS.

The present study describes the case of a patient who presented with joint pain and was diagnosed with idiopathic FS with multiple osteoporotic fractures.

A 46-year-old male visited the outer center (Malatya Public Hospital, Malatya, Turkey) complaining of pain in his hip. The pain was also felt in the shoulders, arms and ankles. He complained of a 1-year history of sustained walking difficulty. He did not complain of any morning stiffness. The patient was diagnosed with rheumatoid arthritis in the outer center (Malatya Public Hospital) and was referred to our tertiary care hospital (Inonu University Faculty of Medicine Turgut Ozal Medical Center.

The patient was previously healthy, and no additional disease was known. His family history was unremarkable, and his vital signs were normal. According to the physical examination, the hip joint and ankle were sensitive and became painful with flexion or extension movement. There was no warmth, redness, or swelling around these joints. Moreover, he was stumbling.

Some of the laboratory values of the case described in the present study.

Bilateral proximal femur fractures and fractures of the iliac and sacral bones and ankles were found via magnetic resonance imaging (MRI) and on the basis of osteoporosis (Fig. 1). HO was diagnosed clinically on the basis of laboratory analyses, and bone densitometry and MRI findings. Thus, a bone biopsy was not performed. Blood and urine biochemical data, and the radiology findings revealed severe osteoporosis, thus indicating FS with proximal renal tubular acidosis (RTA).

Following the diagnosis, the patient was evaluated to determine the etiology of FS. Anti-SSA and anti-SSB tests were negative. The bone marrow biopsy performed following diagnosis was compatible with the normocellular bone marrow; there was no monoclonal component.

The patient was not on any medication in relation to FS. A light microscopic examination of a kidney biopsy demonstrated the cellular infiltration of the interstitium and proximal tubular epithelium composed mainly of C3 without glomerular involvement. Other common observations were moderate tubular degeneration and regeneration, and tubular atrophy consistent with features of TIN.

In summary, the diagnosis of osteomalacia and proximal tubular RTA remains a challenge for physicians due to its non-specific joint manifestations. Severe osteomalacia and osteoporosis are considered to be caused by tubulointerstitial nephritis with FS, a rare, asymptomatic renal involvement.

A total of 180 liters glomerular filtrate forms out of the proximal tubule (PT) every day. Of this amount, 98% is reabsorbed in the PT (10). However, defects in the PT can lead to reabsorption deficiency, primarily of bicarbonate and also of other solutes (such as phosphorus, amino acid, glucose and uric acid). This condition characterizes FS (11). Following the diagnosis of FS, the etiology causing the defect in the PT needs to be researched. Autosomal dominant hereditary diseases may be the cause.

A major cause of FS in adults is the increased excretion of monoclonal immunoglobulin light chains due to monoclonal gammopathies that are otherwise latent. Sjögren's syndrome, primary biliary cirrhosis, tyrosinemia, fructose intolerance, galactosemia, Wilson's disease, Dent's disease, Lowe syndrome and drug-induced cytopathic effects are also considered in the etiology (10). The most toxic agents for the PT are tenofovir, adefovir, ifosfamide, gentamicin, acetazolamide, sodium bicarbonate, sodium valproate, fumaric acid and deferasirox. Overall, any of these factors may be responsible for FS, and even rare cases may be idiopathic (12). The diagnosis of FS is generally made clinically with glycosuria, hypophosphatemia, aminoaciduria, normal anion gap metabolic acidosis and proteinuria (12).

Complaints at referral regarding HO can be generally non-specific, such as proximal myopathy, back pain, bone pain and joint pain (4). As such complaints are similar to those of rheumatologic patients, patients may be misdiagnosed (5). The general characteristics and clinical manifestation of patients with hypophosphatemic osteomalacia are presented in Table II. In addition, some laboratory values of cases are summarized in Table III. Li et al (9) considered HO and rheumatologic diseases, such as rheumatoid arthritis and ankylosing spondylitis, in nine patients who presented between 2011 and 2015. Following an etiology search, HO and FS were then diagnosed (9). In another case involving FS diagnosis on the grounds of primary cirrhosis, the patient first applied to an orthopedic clinic with complaints of year-long bilateral knee pain and walking difficulties. Later, her condition was diagnosed by internal medicine as HO (8). Thus, the awareness of HO is crucial. The present study aimed to increase the awareness of physicians by discussing the mentioned case and similar cases in the literature. Physicians have to be suspicious of HO, whose prevalence is difficult to specify and not stated in the literature. Likewise, medical history, physical examination and drug use need to be thoroughly investigated. Particularly in younger patients, the condition may be associated with HO, given the presentation of unexplained bone and joint pains.

Some laboratory values of cases of FS in the literature.

Case presentations are generally on the grounds of osteoporosis, such as joint or bone pain and walking difficulties. In the case presented herein, the patient was initially considered to have arthritis, but an advanced search was subsequently conducted. The MRI and laboratory test results were examined. The existence of osteoporotic fractures in the MRI and proteinuria in the laboratory findings, normal anion gap metabolic acidosis and glycosuria were discussed in association with nephrology, and PT deficiency was considered. Following the diagnosis of FS, a bone marrow biopsy was performed for the purpose of etiological research, and a normocellular bone marrow was revealed. The patient had no additional drug use. Mouth and eye dryness were examined. Schirmer's test yielded negative results, and Sjögren's syndrome was not considered as the SSA and SSB antibody test results were negative. The patient had no heavy metal exposition. He was considered to suffer from idiopathic FS. Supportive treatment was thus commenced. Serum bicarbonate, phosphorus, potassium, vitamin D replacement was administered. He is still being followed-up by the nephrology clinic due to his stage 3 kidney disease.

ANC and SY were major contributors to the writing of the manuscript, and also made substantial contributions to the design of the study and to the interpretation of data for the study. SY, IS and BE revised and edited the manuscript and also advised on patient treatment. SY, IS, BE and ANC analyzed patient data. ZÖ and ANC contributed to the conception of the study and acquisition of the data, as well as in the analysis of data for the study and provided the radiological images. All authors gave the final approval of the version to be published and reviewed the literature. ANC and SY confirm the authenticity of all the raw data.

The patient provided written informed consent for his clinical information to be used for the purposes of the present study.

The patient provided written informed consent for the publication of his clinical data in the present case report study. 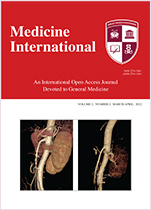