Signal transducer and activator of transcription 3 (STAT3) plays an important role in tumor cell survival and proliferation and thus has become a major focus in the development of anti-cancer therapies. Patrinia scabiosaefolia has been used for the treatment of various types of cancer. However, the precise mechanism of the anti-cancer activity of Patrinia scabiosaefolia remains unclear. In this study, we evaluated the effect of the ethanol extract of Patrinia scabiosaefolia (EEPS) on proliferation and apoptosis in human multiple myeloma U266 cells that persistently express phosphorylated STAT3, and investigated the possible molecular mechanisms mediating its biological effects. We found that EEPS inhibited the phosphorylation of STAT3 in U266 cells. Consequently, the inhibitory effect of EEPS on STAT3 activation resulted in the suppression of cell proliferation and the induction of cell apoptosis. Moreover, EEPS treatment inhibited the expression of cyclin D1 (a promoter of cell proliferation) and Bcl-2 (an inhibitor of apoptosis), two important target genes of the STAT3 signaling pathway. Our findings for the first time demonstrate that Patrinia scabiosaefolia inhibits proliferation and promotes the apoptosis of cancer cells via inhibition of the STAT3 pathway, which may in part explain its anti-cancer activity. 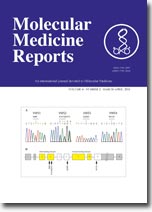