In the activity of DNA damage checkpoints, checkpoint kinase 1 (Chk1) has been described as a central mediator. The activation of Chk1, not only phosphorylates the CDC25 family leading to G2/M phase arrest, but also promotes Rad51-mediated DNA double strand break repair (6). Thus, Chk1 is crucial in the development of radiation resistance, and as a result, the inhibition of Chk1 may lead to a preferential radiation-induced killing of tumor cells. Experimental data in the literature also suggest that this inhibition applies to numerous tumor cells (7–10). As a new model of Chk1 inhibitor, AZD7762 has been demonstrated to sensitize many tumor cell lines in anticancer drug therapy (11–13). However, whether the Chk1 inhibitor promotes radiation-induced tumor cell death in breast cancer cells remains to be determined.

The aim of this study was to determine whether the Chk1 inhibitor AZD7762 is capable of enhancing the toxicity of radiation to cells in vitro and on xenografts in vivo using p53 mutant T47D cells and wild-type p53 MCF7 cells of human breast cancer. Results showed that AZD7762 treatment significantly potentiated the lethal effects of radiation on p53 mutant T47D cells, but not on wild-type p53 MCF7 cells in vitro and in vivo. Thus, the Chk1 inhibitor AZD7762 has the potential to improve the efficacy of radiation therapy in human breast cancer with p53 mutations.

The p53 mutant T47D and wild-type p53 MCF7 cell lines were used in this study. The two cell lines were obtained from the cell culture center of the Wuhan University and were kept in DMEM/F12 culture medium supplemented with 10% fetal bovine serum (FBS), penicillin (100 μg/ml) and streptomycin (100 μg/ml) in a humidified incubator (37°C, 5% carbon dioxide). Animal experiments were approved by the Local Animal Care and Use Committee and were conducted in accordance with the NIH guidelines. As the treatment of AZD7762 (100 nmol/l in vitro and 25 mg/kg in vivo) has been reported to yield maximal radiation enhancement with minimal cytotoxicity to other tumor cells in previous studies, in the present study, AZD7762 was used in vitro and in vivo at concentrations of 100 nmol/l and 25 mg/kg, respectively (14). Nude mice, 4- to 6-weeks old, were inoculated subcutaneously on the hind flank with tumor cells (1×105). One week later, xenografts were formed. Subsequently, the mice were randomized into 4 groups with 4 mice in each group. The control group received PBS i.p. treatment twice a day for 4 days. The AZD7762 group received AZD7762 treatment (25 mg/kg, i.p., AstraZeneca) twice a day for 4 days only. In the radiation group and the radiation plus AZD7762 group, mice were radiated once a day for 4 days with a dose of 2 Gy per fraction (total dose: 8 Gy). During the radiation treatment, mice in the radiation plus AZD7762 group were injected with AZD7762 (25 mg/kg, i.p., AstraZeneca) twice a day for 4 days. Tumor size was assessed by caliper measurements twice a week. Volumes were calculated using the formula (LxWxW)/2. Three weeks after radiation, the mice were sacrificed and xenografts were excised for analysis.

The two cell lines were seeded into 6-well plates at a density of 1000 cells per well in the presence or absence of AZD7762 treatment. Cells were treated with AZD7762 (100 nmol/l) 1 h prior to, and left on for 24 h after radiation (8 Gy). Subsequently, AZD7762 was removed and the fresh culture medium was added. Ten days after radiation, the cells were fixed and a clonogenic assay was carried out. Cell culture medium was removed for analysis and cells were washed once, using PBS. The cells were then fixed in 75% methanol and 25% acetic acid (vol/vol) for 15 min. Colonies were stained for 20 min with 0.5% crystal violet in methanol. After washing and drying, the colonies were counted. Clonogenicity was expressed as % colonies relative to untreated cells. Average values were presented as the mean ± SD. The clonogenic experiments were performed in triplicate.

Since the changes of the cell cycle in many tumor cells become apparent 12 h after DNA damage, T47D cells were treated with AZD7762 (100 nmol/l) 1 h prior to, and left on for 12 h after radiation (8 Gy) (15). The cells were then collected and centrifuged at 1000 rpm for 5 min and were fixed in 75% ethanol at 4°C overnight. The following day, after centrifugation (1000 rpm for 5 min), the cells were suspended using 20 μl PBS. After adding 10 μl RNase A (5 mg/ml), the cells were incubated in a 37°C water bath for 30 min. Additional cells with PI (500 μg/ml) were added and incubated for 30 min in the darkness at room temperature. Flow cytometry was employed for cell cycle analysis. Each experiment was repeated 3 times.

T47D cells were treated with AZD7762 (100 nmol/l) 1 h prior to, and left on for 24 h after radiation (8 Gy). The cells were then suspended in Annexin V-FITC binding buffer (195 μl) and incubated with Annexin V-FITC (5 μl) in the dark at room temperature for 10 min. After centrifugation (1000 rpm for 5 min), the cells were suspended in binding buffer (190 μl) and 10 μl PI solution on ice in the darkness. Cell apoptosis was then determined using flow cytometry. The apoptotic index was calculated by the upper and lower right quadrants. Samples were assayed in triplicate.

T47D cells were treated with AZD7762 (100 nmol/l) 1 h prior to, and left on for 24 h after radiation (8 Gy). The medium was removed and the cells were fixed with cold methanol and stained with 4′-6-diamidino-2-phenylindole (DAPI) for chromosome analysis under an Olympus BX41 fluorescence microscope. Nuclear fragmentation was defined as the presence of ≥2 distinct lobes within a single cell. For each assessment of the extent of mitotic catastrophe, 200 nuclei were examined. Each experiment was repeated 3 times.

The tumor tissues were collected and fixed in 10% neutral-buffered formalin, embedded in paraffin and sectioned. Sections were deparaffinized and rehydrated through xylene and a series of alcohols, microwaved in 10 mM citrate buffer (pH 6.0) for antigen retrieval, endogenous peroxidase was blocked with 3% hydrogen peroxide and non-specific binding was blocked with 10% normal goat serum in PBS. Sections were incubated with PCNA antibody (1:2000; Santa Cruz Biotech, Santa Cruz, CA, USA) overnight in a humidity chamber at 4°C, then incubated again with biotinylated goat anti-mouse IgG, followed by ABC reagent (Vector Laboratories, Burlingame, CA, USA) and diaminobenzidine (DAB). Sections were lightly counterstained with Harris’ hematoxylin and mounted with a glass coverslip for light microscopy.

The sections from paraffin-embedded tumors were subjected to TUNEL staining using the In Situ Apoptosis Detection Kit (Millipore, Billerica, MA, USA) according to the manufacturer’s instructions. Briefly, sections were deparaffinized and treated with 10 μg/ml proteinase K in PBS for 10 min, endogenous peroxidase was quenched in 3% H2O2 in methanol for 30 min, and the slides were washed in PBS and preincubated in TdT Reaction Buffer for 10 min. The slides were then incubated in TdT Reaction Mixture for 1 h at 37°C in a humid chamber. The reaction was paused in a stop wash buffer for 10 min. Incubated sections were detected with Streptavidin-HRP in PBS for 20 min at room temperature. The color reaction was developed using a DAB substrate. Sections were counterstained with hematoxylin before mounting. Cell numbers were converted into percentage of apoptotic cells calculated from total cell numbers.

Statistical analysis was conducted using the SPSS 16.0 software. Continuous variables were expressed as the means ± SD. The Student’s t-test and variance analysis were used in this study. P<0.05 was considered to indicate a statistically significant difference.

To explore the molecular mechanisms by which AZD7762 radiosensitizes breast cancer cells, we used flow cytometry to define the cell cycle phase distribution of breast cancer cells after radiation. Since the most obvious effects of AZD7762 on the cell cycle phase distribution have been proven to occur at 12 h after DNA damage, AZD7762 was added to p53 mutant T47D cells 1 h prior to, and was left on for 12 h after radiation. Subsequently, the cells were harvested for cell cycle analysis. As shown in Fig. 2A and B, radiation-induced G2/M accumulation in breast cancer cells, and adding AZD7762 to radiation resulted in the abrogation of the radiation-induced G2/M arrest (percentage of cells in the G2/M phases: AZD7762 plus radiation group vs. control, AZD7762 and radiation groups, 18.37±5.01% vs. 23.37±4.01, 22.32±5.32] and 63.41±10.19%, p<0.05). Taken together, these results support the conclusion that AZD7762 abrogates radiation induced G2/M accumulation in breast cancer cells.

To gain more insights into the molecular mechanisms by which AZD7762 radiosensitizes breast cancer cells, we also determined whether the radiosensitization of AZD7762 correlates with apoptosis using flow cytometry. As the DNA damage repair occurs within 24 h after radiation, p53 mutant T47D cells were treated with AZD7762 1 h prior to, and left on 24 h after radiation. The cells were then harvested for the apoptosis analysis. Radiation alone was found to induce the apoptosis of breast cancer cells. As shown in Fig. 3A and B, combining AZD7762 with radiation increased the apoptosis rate significantly beyond the rate observed subsequent to radiation alone (apoptosis percentage: AZD7762 plus radiation group vs. control, AZD7762 and radiation groups, 31.21±5.34% vs. 5.16±1.21%, 5.43±0.96% and 16.72±3.12%, p<0.05). The results have demonstrate that AZD7762 facilitates radiation-induced apoptosis.

Having established that AZD7762 radiosensitizes breast cancer cells in vitro, and to translate our above in vitro findings into an in vivo model, we evaluated the radiosensitization efficacy of AZD7762 in breast cancer cell tumor xenografts in athymic nude mice. Results showed that AZD7762 significantly delayed the tumor growth in nude mice receiving radiation and, compared to radiation alone, adding AZD7762 to radiation significantly prolonged the time required for tumor volume doubling (Fig. 5A). Additionally, to characterize the molecular mechanisms by which AZD7762 radiosensitizes breast cancer tumor xenografts in vivo, Chk1 signaling was analyzed in tumors receiving AZD7762 plus radiation treatment for 4 days. Consistent with our in vitro findings, Chk1 was inhibited by AZD7762 in the presence of radiation (Fig. 5B). Moreover, as shown in Figs. 6 and 7, adding AZD7762 to radiation resulted in an apoptosis-induced increase and a decreased proliferation evidenced by the TUNEL and PCNA staining in tumor xenografts in vivo (AZD7762 plus radiation xenografts vs. control, AZD7762 and radiation ones, PCNA: 5.70±1.20 vs. 20.21±5.24, 18.2±6.12 and 9.32±3.61%, TUNEL staining: 13.43±4.26 vs. 4.43±2.65, 5.31±1.73 and 8.21±2.74%, p<0.05). Taken together, these data suggest that AZD7762 sensitizes breast cancer cells to radiation in vivo.

In this study, we found that exposure to AZD7762 may radiosensitize breast cancer cells in vitro and in vivo. These effects may be related to inhibition of the G2/M cell cycle arrest and DNA repair. The inhibition of these two processes results in an increased radiation-induced apoptosis and mitotic catastrophe. Moreover, p53 mutants can predispose breast cancer cells/xenografts to radiation-induced cell death. Our study suggests that Chk1 inhibitor AZD7762 potentially serves as a radiosensitizer in breast cancer tumor with p53 mutations.

Being a checkpoint inhibitor, Chk1 inhibitor AZD7762 has been proven to enhance the toxicity of various DNA damages (19–22). Our results demonstrate that adding AZD7762 to radiation resulted in profound radiosensitization in the breast tumor cells/xenografts. These data further support the clinical potential of AZD7762 as a radiosensitizing agent in breast cancer therapy. In this study, Chk1 inhibitor AZD7762 significantly radiosensitized breast cancer cells/xenografts with p53 mutants, but not those with wild-type p53 activity. These results are consistent with those of previous studies demonstrating that tumors with p53 mutants may be hyper-dependent on the G2 damage-induced checkpoint activity mediated by the Chk1 activity (23–26). These results provide evidence that inhibition of the G2 checkpoint by pharmacological AZD7762 may sensitize p53 mutant breast cancer cells to DNA-damaging agents.

There are some inherent limitations in our study. A number of Chk 1 inhibitors, including AZD7762, have been demonstrated to have the undesirable properties of avid binding to human serum proteins and inhibition of other non-checkpoint kinases (32,33). However, along with the thorough ongoing research on Chk1 inhibitor therapy, we believe that the new schedule and analogues of AZD7762 are likely to overcome these limitations in the future. In conclusion, this study has demonstrated that transient pre-treatment with the Chk1 inhibitor AZD7762 at clinically attainable concentrations may effectively enhance radiation-induced mortality in breast cancer cells and tumors with p53 mutants. In addition, inhibition of the G2/M cell cycle checkpoint and the radiation-induced DNA DSBs repair may be the underlying mechanisms, which require further investigation. 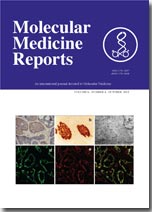