Pancreatic cancer is a lethal disease that is notoriously difficult to treat (1). Only a small proportion of cases are curative through surgical resection and standard chemoradiotherapy for patients with advanced disease only has modest effects with substantial toxicity (2,3). Clearly, the continual development of novel therapeutic agents is required to improve the current situation.

Several studies on biological approaches targeting the molecular abnormalities of pancreatic cancer are available (4–6). One such pathway is the hedgehog (Hh) signaling pathway, which specifies patterns of cell growth and differentiation during embryogenesis in a wide range of tissues (7). In addition to its function in developmental patterning, the Hh pathway is also important in maintaining the homeostasis of mature tissues and the number of somatic cells in various organs. This pathway represents an attractive target for drug development and has shown promise in clinical trials of cancer treatments. The specificity of cyclopamine for the Hh pathway is demonstrated by the absence of cytotoxicity in cells that lack Hh signaling.

Stock solutions of the cyclopamine Hh pathway inhibitor, gefitinib EGFR inhibitor and EGF were prepared at appropriate concentrations in dimethyl sulfoxide (DMSO) and then stored at –70°C. For treatment, inhibitor solutions were diluted 1:1,000 to appropriate working concentrations (20 or 40 μmol/l cyclopamine, 10 μmol/l gefitinib and 3 μmol/l EGF) in serum-free medium. Control cultures received medium containing the solvent DMSO at a concentration of 0.1%. Gefitinib and EGF were supplemented to the culture media 0.5 h before irradiation and 24 h of preirradiation treatment with cyclopamine was conducted.

A Siemens 6 MV X-ray linear accelerator (Siemens, Munich, Germany) was used to deliver a single dose of ionizing radiation (IR) with a dose rate of 200 cGy/min at room temperature.

Cells were plated at various cell densities and irradiated with 0.5, 1, 2, 4 and 6 Gy X-ray 24 h later. Following 12–14 days incubation at 37°C, cells were stained with Giemsa. The number of colonies per dish was counted and the surviving fractions were calculated as the ratio of plating efficiencies for irradiated and unirradiated cells. Plating efficiency is defined as the colony number divided by the number of cells plated for unirradiated controls. Experiments were conducted in triplicate and data from three independent experiments are presented as the means ± SD. All survival fractions were fitted into the linear quadratic model.

Cells were removed with trypsin and collected into centrifuge tubes together with the culture medium. Flow cytometry and Annexin V-fluorescein isothiocyanate (FITC) apoptosis analysis were performed as previously described (11). Cell cycle distribution and apoptotic rate were calculated from 1×10−4 cells using ModFit LT software with the FACS Calibur (both Becton-Dickinson, San Jose, CA, USA).

Cells were removed with trypsin and collected into centrifuge tubes together with the culture medium. Detailed methods for flow cytometry analysis were previously described (12). Cell cycle distribution was calculated from 1×10−4 cells using ModFit LT software with the FACS Calibur.

Detection of γ-H2AX foci immunofluorescence was performed to determine residual DNA double-strand breaks (DSBs). Cells grown on coverslips (Fisher Scientific, Loughborough, UK) were fixed in ice-cold 4% paraformaldehyde for 30 min, blocked with 3% bovine serum albumin in phosphate buffer solution (PBS) and then incubated with an antibody against γ-H2AX (ser139; 1:500; Cell Signaling Technology, Inc.) for 2 h at 4°C. After washing with PBS, secondary FITC-conjugated antibody was added for 1 h. The slides were washed with PBS and then mounted with mounting medium containing 4′,6-diamino-2-phenylindole.

Cyclopamine does not enhance radiation-induced apoptosis

Cell cycle phases are associated with various degrees of radiosensitivity. Thus, the percentage of cells in the radiosensitive G2 cell cycle phase was determined upon treatment with cyclopamine alone or in combination with irradiation (15). A significant G2 cell cycle arrest was noted following irradiation. However, cyclopamine (40 μmol/l) treatment failed to abrogate radiation-induced G2 arrest as compared with DMSO controls. This effect was observed in K-RASwt and K-RASmt pancreatic cancer cells (Fig. 2B).

Effects on DNA-DSB repair by cyclopamine

To analyze how cyclopamine affects radiation-induced H2AX phosphorylation as an indicator of DNA damage signaling, Colo-357 and SW-1990 cells were irradiated with a single dose of ionizing radiation (6 Gy). H2AX phosphorylation at Ser139 reached a maximum at 0.5 h following ionizing radiation (Fig. 3A). Using western blot analysis, a dose-dependent increase in γ-H2AX following ionizing radiation was observed, particularly at the 0.5 h time point (Fig. 3B). The formation of γ-H2AX foci was measured 0.5 h after irradiation of pancreatic cancer cells. This procedure was conducted in order to recognize the molecular mechanisms of cyclopamine radiosensitization. Radiation-induced γ-H2AX foci were significantly increased in cyclopamine-treated Colo-357 and SW-1990 cells (Fig. 4A), indicative of DNA repair inhibition. Fig. 4B shows the effect of cyclopamine on the expression of DNA repair-related proteins. For the two cell lines, H2AX phosphorylation was enhanced following irradiation. In contrast to γ-H2AX, radiation-induced p-ATM, Ku70 and DNA-PKcs were all inhibited (Fig. 4B).

In the present study, the effect of cyclopamine on the radiation clonogenic survival of pancreatic cancer cell lines was analyzed. Cyclopamine treatment exerted significant radiosensitization on K-RASwt and K-RASmt pancreatic cancer cell lines, indicating cyclopamine-induced radiosensitivity through a K-RAS-independent pathway. Apoptosis and cell cycle assays showed that cyclopamine failed to affect radiation-induced apoptosis and cell cycle redistribution. In addition, phospho-H2AX was analyzed following ionizing radiation to determine the underlying mechanisms. Radiation-induced γ-H2AX foci were significantly increased in cyclopamine-treated cells. Western blot analysis showed that radiation-induced p-ATM, Ku70 and DNA-PKcs were all inhibited in cyclopamine-treated cells. To verify the underlying mechanisms in cyclopamine-induced DNA-DSB repair, cells were treated with gefitinib or EGF prior to irradiation. The results indicated that the cyclopamine-induced activity of H2AX occurred, in part, through an EGFR-dependent pathway.

This study was supported by grants from the Hospital Center Technology Development Fund of Wuxi City (no. YGM1101) and the Social Development Project of Kunshan City (no. KS1224). 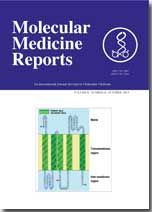