Amyloid precursor protein (APP) has an important function in the generation of Alzheimer's disease (AD). In our previous study, miR‑193b was found to be downregulated in the hippocampi of 9‑month‑old APP/PS1 double‑transgenic mice using microRNA (miR) array. In the present study, bioinformatic analyses showed that miR‑193b was a miR that was predicted to potentially target the 3'‑untranslated region (UTR) of APP. Subsequently, the function of miR‑193b on APP was studied. The levels of miR‑193b, exosomal miR‑193b, Aβ, tau, p‑tau, HCY and APOE in samples from APP/PS1 double‑transgenic mice, mild cognitive impairment (MCI) and dementia of Alzheimer‑type (DAT) patients, were measured. The results indicated that overexpression of miR‑193b could repress the mRNA and protein expression of APP. The miR‑193b inhibitor oligonucleotide induced upregulation of APP. Binding sites of miR‑193b in the 3'‑UTR of APP were identified by luciferase assay. MCI and DAT patients had lower exosomal miR‑193b, but not total miR‑193b, in the blood as compared with the controls. DAT patients had lower exosomal miR‑193b levels in blood as compared with the MCI group. A decreased exosomal miR‑193b expression level was additionally observed in the cerebral spinal fluid (CSF) of DAT patients. Negative correlations were found between exosomal miR‑193b and Aβ42 in the CSF of DAT patients. In conclusion, these findings showed that miR‑193b may function in the development of AD and exosomal miR‑193b has potential as a novel, non-invasive, blood‑based biomarker of MCI and DAT patients.

Alzheimer’s disease (AD) is a prominent neurodegenerative disorder characterized by progressive loss of memory and other cognitive functions. Despite considerable progress in genetics and cell biology, numerous questions remain regarding the mechanisms of neurodegeneration and the molecular and pathological components. Extracellular amyloid-β (Aβ), which is derived from the larger amyloid precursor protein (APP), is considered to be responsible for the death of neurons and dementia in Alzheimer’s disease. An increased expression of APP may increase the risk of AD (1,2). APP levels can be regulated at the genomic, transcriptional or translational level, and in the rate of degradation. Genetic variants in the APP promoter increase APP transcription by 2–3 fold and have been reported to increase the risk of AD (2). APP can be processed by a group of secretases where α-secretase produces soluble fragments, whereas β- and γ-secretase generate Aβ from APP (3). Previous research has suggested that Aβ regulates neuronal and synaptic activity, and accumulation of Aβ in the brain causes a combination of aberrant network activity and synaptic depression (4).

MicroRNAs (miRs) are endogenous, short, noncoding RNAs. Mature miRs are single-stranded RNA molecules of ~20–25 nucleotides which act as important post-transcriptional regulators of gene expression by binding with their target mRNAs. They are additionally essential for normal neuronal function and survival (3,4). Several miRs have been shown to be important in neuropathology by downregulating AD-related proteins, including APP and BACE-1. It has been demonstrated that miR-16, -101, -106a/b, -147 and -160a could function as APP suppressors (5–8).

Several cerebral spinal fluid (CSF) or blood-based markers, such as Aβ, tau and phosphorylated tau (p-tau) are proposed biomarkers for predicting future cognitive decline in healthy individuals, and the progression to dementia in patients who are cognitively impaired (9–11). Previous studies have shown that APP and BACE-1 are novel markers of AD (12–14). However, there is still an urgent requirement for additional biomarkers that can detect AD in the pre-dementia phase (9–14). Alterations to the regulation of miRs in the blood and CSF may indicate progression in AD (15,16). Exosomes are membrane vesicles with a size of 40–100 nm that are released from numerous cell types of the body (17). Recent studies have shown that, in addition to functional proteins, exosomes carry mRNA as well as miRs (18). In functional terms, exosomes are considered to represent a novel mechanism of intercellular communication. This may be due to the uptake of exosomes by target cells or by triggering cell signaling through membrane receptors (17–19). In a previous study, we found that miR-193b was decreased in the hippocampi of 9-month-old APP/PS1 double-transgenic mice by miR array. In the present study, bioinformatic analyses showed that miR-193b may potentially target the 3′-untranslated region (UTR) of APP and the effects of miR-193b on the expression of APP were studied. Blood and CSF derived exosomal miR-193b was detected in APP/PS1 double-transgenic mice, and patients with mild cognitive impairment (MCI) and dementia of Alzheimer type (DAT).

The 3, 6 and 9-month-old APP/PS1 double-transgenic mice on a C57BL/6J genetic background were purchased from the Institute of Laboratory Animal Science, Chinese Academy of Medical Sciences & Comparative Medical Center (Beijing, China). All the animal protocols were approved by Ethics Committee of Xuanwu Hospital of Capital Medical University (Beijing, China). The non-transgenic mice were used as wild-type (WT) controls. Blood was taken by removing the eyeballs and CSF-like fluid was collected as previously described (20). The hippocampi were isolated as described for miR-193b quantitative polymerase chain reaction (qPCR) detection (n=5). The samples were stored in liquid nitrogen until analysis.

Western blotting was performed as previously described (22). Cells were homogenized in extraction buffer, then incubated at 0°C for 15 min and centrifuged at 2,000 × g for 10 min at 4°C. Aliquots of the supernatants were used for the measurement of the total protein content. Samples were boiled for 5 min in loading buffer and then the proteins (30 μg per well) were separated by 10% SDS-PAGE (Bio-Rad, Hercules, CA, USA). Proteins in the gel were transferred onto a nitrocellulose membrane (Pall Corporation, New York, NY, USA). Membranes were incubated with anti-APP (diluted 1:500; Abcam, Cambridge, UK), and anti-GAPDH (diluted 1:400, Abcam) at room temperature for 1.5 h, respectively. Membranes were then washed and incubated with anti-IgG antibody linked to horseradish peroxidase at room temperature for 1 h. The membranes were then incubated with substrate for peroxidase and enhanced chemiluminescence (KPL, Gaithersburg, MD, USA) for 1 min and exposed immediately to X-ray film for 1–5 min. Films were then revealed in the conventional manner. The amount of each protein was measured by densitometric analysis and standardized relative to GAPDH. The number of samples in each group was five.

The exosomes were isolated using the Total Exosome Isolation kit (Invitrogen Life Technologies) according to the manufacturer’s instructions. Briefly, the serum was centrifuged at 2,000 × g for 30 min to remove cells and debris. Following this, 400 μl clarified serum was transferred to a new tube and 0.4 volumes of the Total Exosome Isolation reagent was added. The serum/reagent solution was mixed and then incubated at 4°C for 30 min. After incubation, the samples were centrifuged at 10,000 × g for 10 min at room temperature. The supernatant was discarded and the pellet, containing the exosomes, at the bottom of the tube was resuspended in 200 μl phosphate-buffered saline (PBS).

Total RNA in 350 μl CSF, or 200 μl serum samples was extracted using a spin column method with an miRNeasy Serum/Plasma kit (Qiagen, Hilden, Germany) according to the manufacturer’s instructions. Exosomal RNA was isolated and purified using a Total Exosome RNA Isolation kit (Invitrogen Life Technologies). The RNA isolated from the CSF was 530–1,500 ng/ml, 2,100–4,700 ng/ml from serum, 270–420 ng/ml from the exosome. Total RNA in hippocampus tissue from the animal models and cultured cells was extracted using a spin column method using the miRNeasy kit (Qiagen). MiRs were reverse transcribed into cDNA using the miScript II RT kit (Qiagen) in a 10 μl reaction system. MiR-193b were determined by a TaqMan qPCR method (Applied Biosystems, Foster City, CA, USA), using U6 RNA as an endogenous control.

Statistical analyses were performed using SPSS 13.0 for Windows (SPSS, Inc., Chicago, IL, USA). For normally distributed data, results are expressed as the mean ± standard deviation. The differences between groups were assessed by t-tests and analyzed using the Mann-Whitney U-test. Correlations were determined by computing the Spearman rank correlation coefficient. P<0.05 was considered to indicate a statistically significant difference.

MiR-193b represses the mRNA and protein expression of APP

As shown in Fig. 2, the mRNA and protein expressions of APP were significantly decreased by miRNA-193b in SH-SY5Y cells (P<0.05). The miR-193b inhibitor oligonucleotide induced a significant upregulation of mRNA and protein expression of APP as compared with the nonspecific control groups, respectively (P<0.05). By TaqMan qPCR, a ~55% downregulation of endogenous miR-193b was observed (data not shown).

Over-expression of miR-193b significantly reduces fluorescence from APP reporter vectors in HEK293 cells (P<0.05). These reductions were not observed when mutations were made to the 3′UTR seed regions of APP or BACE-1 were generated (Fig. 3).

Exosomal miR-193b decreases in the CSF, serum and plasma of AD patients

The level of exosomal miR-193b was lower in the CSF compared with serum from a given individual (P<0.05; data not shown). There was no correlation between exosomal miRNA-193b levels and the CSF and serum from a given individual (data not shown). When the cutoff value was set as the mean concentration - two standard deviations of the controls, the positive rates of exosomal miR-193b were 71.43% (5/7) and 58.82% (30/51) in the CSF and serum of patients with DAT respectively, and 58.14% (25/43) in the serum of patients with MCI.

The potential benefit in the analysis of miR in the diagnosis and treatment of numerous diseases, including cancer, infection and neurodegenerative disease has been previously evaluated by numerous researchers (6,23,24). The expression profiles of miRs are known to be altered in several regions of the AD brain, however the cause or consequence in the pathology of the disease is unknown. There has been no data to suggest a direct genetic link between miRs or miR recognition elements and neurodegenerative disease (6,9,10,23,24). High expression of APP correlating with accelerated accumulation of Aβ in the brain is a feature of AD. Previous research has demonstrated miR-106a/b, -147, -160a, -520c and -655 function as APP suppressors (5–8). In the present study, it was shown that miR-193b could repress the expression of APP by binding its 3′-UTR and decay its mRNA. The deregulated miR-193b may play a role in the development of AD and the downregulating effects of miR-193b on APP may represent a study direction for AD therapy by miR.

Previous studies have demonstrated that miRs are stably expressed in various bodily fluids, and their unique expression patterns can serve as fingerprints of various diseases, including AD (25). The CSF is in direct contact with the extracellular space of the brain and can reflect biochemical changes that occur in the latter. The CSF is therefore the optimal source of AD biomarkers. CSF, however, is not an appropriate sample for screening and routine testing due to its invasive process of sample collection. From this perspective, blood based biomarkers for AD screening and routine testing would be more suitable (26). Circulating miRs can derive from many sources, including cell death and lysed cells, which are passive secretions, as well as active secretion from cells by exosomes and microvesicles. Although endogenous plasma miRNAs exist in a form that is resistant to plasma RNase activity and other conditions such as extreme pH, the exosomes may provide additional protection, which allows data to be obtained that reflects the accurate expression level of miR actively secreted from cells. The miRs can also be transported by other carriers such as high and low density lipoprotein, both of which are highly abundant in plasma and cannot be generated by brain (27). The total small RNAs isolated from body fluid may contain more non-brain-derived miRs than that from exosomes. Furthermore, exosomes are actively secreted from cells, which can help to eliminate the interference from passively secreted miRs.

In conclusion, these findings showed that miR-193b may function in the development of AD and exosomal miR-193b has potential as a novel, noninvasive blood-based biomarkers of patients with MCI and DAT.

This study was supported by the Natural Science Foundation of China (no. 81271924) and Research Fund for the Doctoral Program of Higher Education of China (no. 20121107110001). The authors would like to thank Dr Shuang Meng of the Chinese Center for Disease Control and Prevention, Beijing, People’s Republic of China for the vector construction and fluorescence detection. 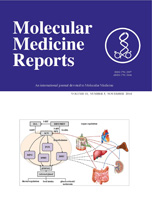