Traditionally, it was presumed that gastric cancer was derived from tumor cells with stem‑like properties. In the present study, stem‑like cells from the gastric cancer cell lines MKN45 and SGC7901 were enriched by growing them as spheres in a defined serum‑free medium. Following enrichment for stem‑like cells, cluster of differentiation (CD)24 and CD44 were applied as candidate stem cell markers to examine the expression profile. It was revealed that the sphere‑derived cells contained a higher proportion of cells expressing the stem cell surface markers CD24 and CD44 when compared with the parental cells. It was also identified that the expression of cytokeratin 18 in sphere‑derived cells was decreased and the expression of vimentin and aldehyde dehydrogenase 1 (ALDH1) was increased compared with the parental cells. This finding supports the existence of a population of tumor sphere‑forming cells with stem cell properties in the MKN45 and SGC7901 cell lines. Furthermore, the stem cell population was enriched in cells expressing CD24, CD44, vimentin and ALDH1 cell surface markers. These results support the existence of gastric cancer stem cells and provide an alternative approach to the diagnosis and treatment of gastric cancer.

Gastric cancer is one of the most common types of cancer worldwide with ~989,600 new cases and 738,000 mortalities annually, accounting for ~8% of all new cancers (1–4). Common therapeutic methods have not been able to decrease the high mortality rate of gastric cancer. Gastric cancer is heterogeneous in nature and visible via scan/X-ray although the association between its histological phenotype and its biological behavior remains to be elucidated. Recently, a cancer stem cell hypothesis was proposed to explain the heterogeneity of cancer cells. The cancer stem cell hypothesis, in contrast to conventional stochastic theory, hypothesizes that only cancer stem cells (CSCs) are able to initiate tumor formation, self-renewal and differentiation. CSCs have been verified to drive the growth and metastasis of cancer cells (2). In order to investigate the mechanisms underlying the behavior of gastric cancer, the establishment of an in vitro model of CSCs is required.

In the present study, CSCs were isolated from human gastric cancer cell lines (MKN-45 and SGC7901) using tumorsphere culturing in serum-free medium and the expression of CSC markers CD44 and CD24 were identified. Furthermore, the expression of cytokeratin 18 (CK18), vimentin and aldehyde dehydrogenase 1 (ALDH1) was also examined in order to investigate the characteristics of CSCs.

MKN45 and SGC7901 cell lines were maintained in DMEM containing 10% fetal bovine serum (Invitrogen Life Technologies, Carlsbad, CA, USA) at 37°C in a 5% CO2 atmosphere. To obtain spheres in culture, the cells were plated at a density of 105 cells/ml in serum-free medium (DMEM/F12; Invitrogen Life Technologies) supplemented with 20 ng/ml bFGF, 20 ng/ml EGF, 0.5 μg/ml glucocorticoid and 2% B27. Culture medium was replaced or supplemented with additional growth factors every 4 days. To propagate spheres in vitro, sphere cells were collected by gentle centrifugation at 150 × g for 3 min, dissociated into single-cell suspensions and cultured to allow the regeneration of spheres. Second-generation spheres were used for all subsequent experiments. The total number of tumor spheres was counted following 9 days of culture. Sphere formation efficiency was calculated within 10 high power fields. The sphere from the MKN45 cell line was fixed in 10% neutral formalin, then coated onto glass slides and stained with hematoxylin and eosin. Subsequently, the cells were observed using a fluorescence microscope (magnification, ×400; Olympus, Tokyo, Japan).

For immunofluorescence staining, cells were collected in a 1.5 ml centrifuge tube, fixed with 4% paraformaldehyde for 30 min at room temperature, then coated onto glass slides and permeabilized with 0.1% Triton X-100/PBS for 15 min at room temperature and then incubated with the Hoechst 33258 (Beyotime Institute of Biotechnology) for 10 min. Subsequently, the cells were observed using a fluorescence microscope (magnification, ×400; Olympus). For FCM analyses, tumor spheres were dissociated as single cells, washed and incubated with the appropriate concentration of control or specific antibody for 45 min. Then, the cells were washed and incubated with CD44 and CD24 antibodies for 1 h, and then with fluorescein isothiocyanate-conjugated secondary antibodies for 30 min. All samples were measured using a flow cytometer (BD Biosciences, Franklin Lakes, NJ, USA).

The statistical analysis was performed using SPSS 12.0 software (SPSS, Inc., Chicago, IL, USA). The results are shown as the mean ± standard deviation in three replicate samples and compared using Student’s t-test and analysis of variance. P<0.05 was considered to indicate a statistically significant difference. All experiments were performed at least three times to ensure reproducibility of the results.

To determine if a population of CSCs exists in gastric cancer cells lines, the gastric cancer cells lines MKN45 and SGC7901 were grown in serum-free sphere-promoting conditions. Following 9 days of culture, golf ball-like spheres were observed ranging between 40 and 100 cells per sphere. Cells from the MKN45 and SGC7901 cell lines were able to form spheres, however, they produced different quantities, suggesting that each cell line contains a different number of stem-like cells. MKN45 cells exhibited a higher sphere-forming efficiency than the SGC7901 cells (Fig. 1).

Gastric cancer is one of the most severe diseases worldwide. Despite advances in various diagnostic tools and therapies, the five-year relative survival rate remains extremely low (8–11). One century ago, Julius Cohnheim proposed that tumors are derived not from normal adult tissues, but from ‘embryonal cell rests’, which he described as residual embryonic cells ‘left behind’ in the adult organism (12). It was hypothesized that CSCs are important in tumor initiation, invasion, metastasis and resistance to anticancer therapies (13). A previous study demonstrated that stem cell-like cells can be isolated in vitro from gastric cancer tissues, which suggested that CSCs existed in gastric cancer (14). The method of inducing parental cells into a spheroid body has been increasingly used for enriching stem cells and is dependent on their property of anchorage-independent growth. There were numerous types of applications in spheroid body culture used to isolate and enrich potential CSC subpopulations from primary tumors (15–17). It was reported that spheroid bodies were derived by placing the parental MKN45 cells into serum-free RPMI-1640 culture medium containing N-2, B27, antibiotic mixture, FGF-2 and EGF (18). In the present study, it was revealed that cells from the MKN45 and SGC7901 cell lines were able to form spheres in serum-free medium but produced different quantities and MKN45 cells exhibited a higher sphere-forming efficiency than SGC7901 cells.

Previous studies demonstrated that ALDH1, CD24, CD44, CD54, CD90, CD133, CD166 and EpCAM were stem cell markers in gastric cancer (6,19,20). CD44 was regarded as the main gastric CSC marker, which was reported to be expressed in several studies of gastric CSCs (5,21). Three gastric cancer cell lines, including MKN-74, MKN-45 and NCI-N87 had a substantial subpopulation of CD44+ cell. When these cells were injected into the stomach and skin of mice with severe combined immunodeficient (SCID) in vivo, spheroid colony formation was observed in serum-free media in vitro and the cells possessed tumorigenic ability. The CD44+ gastric cancer cells exhibited the characteristic stem cell properties of self-renewal and the ability to form differentiated progeny and generate CD44− cells (5). Following CD44 knockdown using short hairpin RNA, spheroid colony formation was significantly reduced and tumor production in SCID mice decreased. In addition, the CD44− populations had significantly reduced tumorigenic ability in vitro and in vivo (5). The present study demonstrated that the expression of CD44 was higher in the MKN45 sphere cells and SGC7901 sphere cells than in the parental MKN45 and SGC7901 cells, which indicated that CD44 was an important stem cell marker.

CD24 is expressed in putative stem cells within numerous tissues and is often overexpressed in colonic and gastric adenocarcinomas (22). In certain studies, CD24 has been found to be a gastric stem cell marker (21,23–26). The number of floating tumorsphere cells expressing CSC markers, including CD44, CD24 and CD133, was significantly higher in tumorsphere cells compared with in adherent cells (7). However, the present study demonstrated that CD24 was more highly expressed in the MKN45 sphere cells and SGC7901 sphere cells than in the parental MKN45 and SGC7901 cells, indicating that CD24 was an important stem cell marker.

Mesenchymal stem cells (MSCs) have been isolated from various human tissues. MSCs have various characteristics which all contribute to their therapeutic potential, including their low immunogenicity, the ability to secrete cytokines and their plasticity. It has recently been reported that MSCs are also involved in tumorigenesis and its prognosis (14). Certain stem cell-associated genes, including Oct-4, Nanog, Bmi1, Nucleostemin, ABCG2, CD44, CD73, CD90 (Thy-1) and other genes, including α-smooth muscle actin (α-SMA) and vascular endothelial growth factor were expressed by MSCs and SGC7901 cells (14). However, the expression of CD90 (Thy-1), α-SMA and ING4 were significantly greater in MSCs than in SGC7901 cells (14). By contrast, CK18 was detected in SGC-7901 cells but not in MSCs. MSCs derived from human gastric cancer and human bone marrow were moderately positive for mutant p53 and CK18. SGC7901 cells were strongly positive for them (14,27). The present study demonstrated that the expression of CK18 was decreased in the MKN45 sphere cells and SGC7901 sphere cells compared with that in the parental MKN45 and SGC7901 cells. Furthermore, the immunoblot analysis suggested that there was no vimentin expression in the parental MKN45 and SGC7901 cells, however, vimentin was partially expressed in the MKN45 sphere cells and SGC7901 sphere cells. The former demonstrated that the MKN45 sphere cells and SGC7901 sphere cells possessed the characteristics of MSCs.

ALDH1 has been demonstrated to serve as a marker for cancer-initiating cells. A previous study found that 5–8% of human diffuse type gastric carcinoma cells consisted of ALDH1+ cells and that OCUM-2MLN and HSC-39 cells were more prone to developing cancer than that of ALDH1+ (28). Several other studies also indicated that cells, such as CD133+, CD26+, ALDH1+ and CD44+ cells were found in the stem cell zone close to the normal mucosa together with Lgr5+ cells and they were these markers were also detected on the surface of gastric cancer cells (29). The present study found that the expression of ALDH1 was higher in the MKN45 sphere cells and SGC7901 sphere cells than in the parental MKN45 and SGC7901 cells, indicating that ALDH1 was an important stem cell marker.

In conclusion, the present study succeeded in culturing gastric CSCs from the MKN45 and SGC7901 cells. Furthermore, the sphere cells possessed the typical characteristics of MSCs. The results may aid in the development of novel culture methods to produce gastric stem cells in vitro, which can be used to test potential therapeutic agents for gastric cancer. 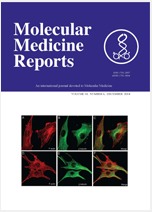