It has been reported that the expression of C‑X‑C motif chemokine receptor 4 (CXCR4) is increased in patients with lung injury, while CXCR4 downregulation can improve sepsis‑induced lung injury. Previous studies have shown that tranilast can inhibit CXCR4 mRNA expression. Therefore, the present study aimed to investigate whether tranilast could protect against lipopolysaccharide (LPS)‑induced lung injury via the CXCR4/Janus kinase 2 (JAK2)/STAT3 signaling pathway. A Cell Counting Kit‑8 assay was performed to evaluate the effect of different concentrations of tranilast on the viability of LPS‑induced BEAS‑2B cells. The mRNA and protein expression levels of the inflammatory factors, TNFα, IL‑1β, IL‑6, cytochrome c oxidase subunit II and inducible nitric oxide synthase were detected using reverse transcription‑quantitative PCR and western blot analysis, respectively. In addition, the cell apoptosis rate and the expression levels of apoptosis‑related proteins were analyzed using a TUNEL staining assay and western blot analysis, respectively. The expression levels of the CXCR4/JAK2/STAT3 signaling pathway‑related proteins were also determined using western blot analysis. Furthermore, the effects of tranilast on cell viability, inflammation and apoptosis were also evaluated in LPS‑stimulated BEAS‑2B cells following CXCR4 overexpression, which were pre‑treated with tranilast. The results demonstrated that tranilast could alleviate LPS‑induced cell viability, the secretion of inflammatory cytokines and cell apoptosis. In addition, cell treatment with tranilast inhibited the expression of CXCR4/JAK2/STAT3 signaling‑related proteins in LPS‑induced BEAS‑2B cells. Following CXCR4 overexpression, the alleviating effect of tranilast on cell viability, inflammatory response and apoptosis was notably attenuated. Overall, the current study suggested that tranilast could attenuate LPS‑induced lung injury via the CXCR4/JAK2/STAT3 signaling pathway, suggesting that tranilast could be considered as a promising agent for treating sepsis‑induced acute lung injury.

Sepsis, a systemic inflammatory syndrome, which is induced in response to infection, is considered to be a significant clinical issue in intensive and critical care medicine (1). It is estimated that ~14,000 individuals die from sepsis-induced multiple organ dysfunction every day in the world (2). Acute lung injury (ALI), one of the most severe complications of sepsis, is characterized by high complication and mortality rates, while its treatment is considered to be challenging (3). In response to endotoxins, such as lipopolysaccharides (LPS), chemokines and inflammatory mediators, the overactivation of inflammatory responses in the lungs may lead to lung dysfunction, which in turn promotes oxidative stress injury, the main pathological mechanism of ALI in sepsis (4–6).

Tranilast was developed and launched to the market in the 1980s. It is used as an allergic mediator by promoting the secretion of blockers that stabilize mast cell membranes and basal cells to prevent the release of allergic reaction-related substances, such as histamine and 5-hydroxymycin, eventually protecting against acute asthma (7,8). In addition, tranilast was originally used to treat type-I allergic diseases, such as bronchial asthma and allergic rhinitis, while it was later found to be effective against other inflammatory diseases, such as acute colitis and atherosclerosis (9–11). It has been reported that tranilast regulates the inflammatory response by upregulating the anti-inflammatory factors IL-4, IL-10 and heme oxygenase 1 and inhibiting the levels of the pro-inflammatory cytokines, IL-1β, IL-6 and TNF-α in serum (10,12,13). Tranilast can improve the effect of lung injury induced by cyclophosphamide (14) and decrease TGFβ-induced pulmonary fibrosis (15), indicating that tranilast has an important protective effect on lung injury. However, whether tranilast could reduce lung injury caused by sepsis, as well as the underlying mechanism, remains unknown. A recent study demonstrated that pre-treatment of Ldlr−/− mice with tranilast, fed on a high-fat and high-sugar diet, could prevent the progression of atherosclerosis and vascular inflammation (16). The aforementioned study also reported that tranilast could suppress the activation of Nod-like receptor family pyrin domain-containing 3 inflammasome in LPS-induced murine macrophages. In addition, another study showed that treatment of breast cancer cell lines with tranilast could inhibit C-X-C motif chemokine receptor 4 (CXCR4) signaling, a chemokine receptor involved in lung cancer and sepsis-induced ALI (17–19). Based on the aforementioned findings, the present study aimed to investigate whether tranilast could also ameliorate sepsis-induced ALI by attenuating the LPS-induced secretion of pro-inflammatory cytokines via the CXCR4 signaling pathway.

The CXCR4 overexpression plasmid (ov-CXCR4) and the corresponding negative control plasmid (ov-NC) with lentiviral expression vector GV 493 were synthesized by Shanghai GenePharma Co., Ltd. The BEAS-2B cells were transfected with 20 nM ov-CXCR4 or ov-NC using Lipofectamine® 2000 (Invitrogen; Thermo Fisher Scientific, Inc.) at 37°C with 5% CO2 followed by incubation in serum-free medium for 4 h and then in complete culture medium for 16 h. The transfection efficacy was determined using reverse transcription-quantitative PCR (RT-qPCR) after 48 h.

The BEAS-2B cells in the logarithmic growth phase were seeded into 96-well plates, at a density of 1×105 cells/well and cultured in the presence of 100 µl/well complete culture medium. Each well was then supplemented with 10 µl CCK-8 solution (Beijing Solarbio Science and Technology Co., Ltd.) and the cells were then incubated for 3 h. The optical density was measured at 450 nm using a microplate reader.

The cells were seeded onto a glass slide (dimensions, 1×1 cm), then placed into a 24-well plate. After transfection of LPS induced cells, the cells were washed three times with PBS and fixed in 4% paraformaldehyde for 15 min at 37°C. The TUNEL Detection kit (Shanghai Yeasen Biotechnology Co., Ltd.) was utilized to stain the apoptotic cells for 1 h at 37°C. The cell nuclei were counterstained with DAPI for 10 min at room temperature. Five random fields of views were selected for analysis and the apoptotic cells were observed under a fluorescence microscope (magnification, ×200). The percentage of apoptotic cells was calculated as the ratio of the number of TUNEL-positive nuclei to that of DAPI-stained cells.

SPSS v22.0 statistical software (IBM Corp.) was used to analyze and process the experimental data. The results are expressed as the mean ± SD. To compare the differences among multiple groups, one-way ANOVA followed by Tukey's post hoc test was used, while comparisons between two groups were assessed using unpaired Student-t test. P<0.05 was considered to indicate a statistically significant difference. Each experiment was repeated three times.

As shown in Fig. 3A, the number of TUNEL-positive apoptotic cells was increased in the LPS group compared with that in the control group (P<0.001). However, the number of apoptotic cells was reduced in the tranilast pre-treatment group with 50 (P=0.0002), 100 (P<0.001) and 200 µM (P<0.001) compared with that in the LPS group. Consistently, western blot analysis further confirmed the TUNEL assay results. Pre-treatment of the BEAS-2B cells with tranilast reversed the LPS-mediated decreased Bcl2 and increased Bax and cleaved caspase-3 protein expression levels (Fig. 3B), indicating that tranilast could alleviate LPS-induced BEAS-2B cell apoptosis.

Cell pre-treatment with tranilast could decrease the mRNA expression level of TNF-α, IL-1β and IL-6 in LPS-stimulated BEAS-2B cells; however, the results showed that CXCR4 overexpression could reverse this effect (all P<0.001) (Fig. 6A). Compared with that in the LPS + 200 µM + ov-NC group, the protein expression level of COX2 (P=0.0315) and iNOS (P=0.0019) was increased in the LPS + 200 µM + ov-CXCR4 group (Fig. 6B). This finding suggested that tranilast could suppress LPS-induced pro-inflammatory cytokine release by inhibiting the activation of CXCR4/JAK2/STAT3 signaling.

Sepsis, a common clinical complication of severe infectious diseases, is characterized by multi-organ failure, as a result of LPS-induced systemic inflammatory responses (21). Furthermore, ALI is a serious complication that can develop in the early stages of sepsis, with an incidence rate of 70% and a mortality rate of 50–70%, without timely treatment (22,23). Therefore, it is crucial to identify novel agents for protecting the lungs from exacerbated sepsis-induced inflammatory injury.

The anti-allergic drug tranilast could inhibit the release of chemical mediators, such as histamine, thereby exerting an anti-inflammatory effect (24,25). Emerging evidence suggests that tranilast exhibits a broad range of anti-inflammatory properties. Previous studies have shown that tranilast preconditioning can attenuate the LPS-induced release of pro-inflammatory cytokines from macrophages (12,26). An in vivo study also demonstrated that tranilast effectively attenuated inflammation in rats with spinal cord injury (27). In addition, tranilast was shown to improve inflammasome-triggered gouty arthritis by directly targeting NLRP3 (28). Importantly, tranilast was shown to exert a significant protective effect against lung injury by ameliorating cyclophosphamide-induced lung injury and TGF-β-mediated pulmonary fibrosis (14,15). In the present study, preliminary experiments revealed a dose-dependent improvement in cell viability in LPS-stimulated BEAS-2B cells following tranilast preconditioning. To the best of our knowledge, the results confirmed, for the first time, the potential protective effect of tranilast on LPS-induced lung injury.

LPS acts as the main ‘mediator’ of sepsis-induced multi-organ failure by stimulating neutrophils and macrophages to release large quantities of inflammatory cytokines, such as TNF-α, IL-1β and IL-6, as well as inflammation-related enzymes, such as COX2 and iNOS (29,30). TNF-α not only directly damages vascular endothelial cells in the lungs, but also induces immune stress by binding to TNF receptors of other inflammatory cells, such as macrophages and mast cells, thus promoting the secretion of inflammatory cytokines, leading to the initiation of the inflammatory cascade (31). IL-1β can further promote immune stress and inflammation, while IL-6 leads to the release of oxygen-derived free radicals, such as reactive oxygen species. COX2 and iNOS have been associated with the inflammatory response in several pulmonary diseases, including pulmonary fibrosis, ALI and lung cancer (32–34). The results of the current study showed that pre-treatment of LPS-induced BEAS-2B cells with tranilast notably downregulated the mRNA expression levels of TNF-α, IL-1β, IL-6, COX2 and iNOS, suggesting that tranilast could exert an anti-inflammatory effect on sepsis-induced ALI.

To further verify the aforementioned results, the mechanism underlying the effects of tranilast on ALI was investigated. CXCR4, a chemokine receptor, is a highly conserved 7-pass transmembrane G-protein-coupled receptor, that plays a vital regulatory role in morphogenesis, angiogenesis and immune responses (35,36). A previous study revealed an aberrant upregulation of CXCR4 in an in vitro ALI model (37). In addition, a study showed that the reduced expression levels of CXCR4 mRNA and the decreased number of neutrophils could largely improve ALI in sepsis, thus suggesting that CXCR4 knockdown could be used in ALI treatment (18). A previous study also showed that combination treatment of tamoxifen and tranilast could downregulate CXCR4 mRNA expression in breast cancer cell lines (17). Kyoto Encyclopedia of Genes and Genomes pathway enrichment analysis also predicted that chemokine signaling could activate JAK2/STAT3 signaling, thereby affecting cell survival and apoptosis (38). In the present study, pre-treatment with tranilast attenuated LPS-induced activation of the CXCR4/JAK2/STAT3 signaling pathway, while CXCR4 overexpression diminished the alleviative effect of tranilast on LPS-induced BEAS-2B cell viability, the inflammatory response and apoptosis, which is the novelty of the present study. Those were what make our paper innovative.

The present study examined the effect of tranilast on LPS-induced lung injury at the cellular level; however, further studies using animal models are required to confirm the results.

In conclusion, the present study showed that tranilast alleviated LPS-induced BEAS-2B cell viability, inflammatory response and apoptosis by attenuating CXCR4/JAK2/STAT3 signaling. Therefore, the results confirmed the curative potential of tranilast in treating sepsis-induced ALI and partly uncovered its underlying mechanism of action. However, more experiments are required to verify the results of the current study in vivo.

YL and YZ wrote the manuscript and analyzed the data. ZH and HW performed experiments, supervised the present study, searched the literature and revised the manuscript. All authors have read and approved the final manuscript. YL and YZ confirm the authenticity of all the raw data. 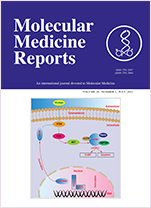