The authors are grateful to the Editor of Molecular Medicine Reports for allowing them the opportunity to publish this corrigendum, and all the authors agree with its publication. The authors also regret the inconvenience that these mistakes have caused. 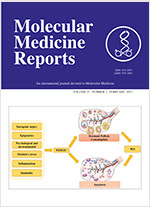