Germline mutations in the BRCA1 and BRCA2 genes highly predispose to breast and ovarian cancers and are responsible for a substantial proportion of familial breast and ovarian cancers. No female individuals from families from Morocco affected by breast cancer with mutations of these genes have previously been reported, and clinicians in Morocco are unaccustomed to dealing with healthy female individuals carrying mutations in the BRCA genes. This study aimed to report the initial experience of a group of Moroccan investigators carrying out predictive genetic testing to detect a known familial mutation in healthy Moroccan females with a high risk of developing breast cancer and to introduce supervision of these asymptomatic female carriers as a new approach in the prevention and early diagnosis of breast and ovarian cancers in Morocco. Presymptomatic diagnosis was carried out using DNA genetic testing in 5 healthy Moroccan female individuals from three families with an elevated risk of developing breast cancer. These are the first Moroccan families reported to be affected by breast cancers associated with BRCA mutations. Presymptomatic diagnosis was carried out for breast cancer in 5 female individuals from three Moroccan families with BRCA mutations. Two of the families are the first reported incidence of the founder mutation Ashkenazi BRCA1-185_186delAG in Moroccan patients. The third family carried the known BRCA2 mutation c.5073dupA/p.trp1692metfsX3. We tested the presence of these mutations in 5 asymptomatic healthy females from the three families. Two sisters from family 1 carried the BRCA1-185_186delAG mutation, whereas the third female individual from family 2 carried the c.5073dupA/p.trp1692metfsX3 mutation. However, one healthy female individual and her mother from family 3 did not carry the familial mutation of the BRCA1 gene. This study found BRCA mutations in three asymptomatic subjects, suggesting that this is the first step towards the development of persistent medical monitoring of females from families with a history of breast and ovarian cancers. Consequently, it is crucial for oncologists in Morocco to initiate the supervision of healthy female individuals with genetic defects which may lead to hereditary cancers.

Tumours and cancers have become major public health problems in Morocco, particularly due to a rapid epidemiological transition. Cancer mortality remains high since diagnosis is frequently delayed, and medical management is difficult and costly. Health authorities in Morocco launched various campaigns to combat cancer, since a large proportion of these diseases may be prevented or detected early and properly treated. However, familial forms of cancer only recently attracted interest, and some local genetic centres have begun to provide oncogenetic services and offer genetic testing for certain inherited forms of cancer with special focus on breast cancer.

BRCA1 and BRCA2 are large genes containing 5,592 and 11,385 nucleotides spread over approximately 100,000 bases of genomic DNA each. More than 1,000 BRCA mutations are reported in the Breast Cancer Information Core database (7). In the general population, it is estimated that approximately 1 in 300 to 1 in 800 individuals carry a mutation in the BRCA1 or BRCA2 gene (8).

Clinical genetic testing for gene mutations allows physicians to identify more precisely female individuals who are at a substantial risk of developing breast and ovarian cancers. For these individuals, screening and prevention strategies can be instituted to reduce the risks (1).

The main objective of this study is to report the first use of predictive genetic testing to detect a known familial mutation in healthy Moroccan females with a high risk of developing breast cancer and introduce supervision of these asymptomatic female carriers as a new aspect in the combat against breast and ovarian cancers in Morocco.

Patients and their family members

Patients with breast cancer from unrelated families were referred to our Medical Genetics Department for genetic counseling. BRCA genetic testing was carried out in patients with early age of onset at diagnosis, positive family history or bilateral breast cancer. Table I shows the clinical data for three index cases from 23 unrelated families enrolled in the study. Genetic testing for presymptomatic diagnosis was requested by 5 healthy female individuals among 45 female individuals with an elevated risk of breast cancer from the three families in whom mutations of the BRCA1/2 genes were identified (Fig. 1). The study was approved by our local ethics committee, and the subjects included in the study gave written informed consent for DNA testing.

Clinical details of the three probands in the three families.

Genomic DNA was extracted from peripheral blood lymphocytes using salt extraction methods and a complete analysis of BRCA1/2 coding regions by bi-directional sequencing was performed. When BRCA mutations were detected, they were confirmed on a second patient DNA sample. The familial mutation was identified by targeted direct sequencing of DNA from family members who were at a high risk of developing breast or ovarian cancers according to their pedigree data and who had requested this type of genetic testing.

Two sisters from family 1 (III-2 and III-10; Fig. 1A) were found to be carriers of the BRCA1-185delAG mutation. Clinical and imaging surveillance of the two sisters detected a breast tumour using magnetic resonance imaging of the breast in the 48-year-old sister (III-2), currently living abroad and followed by a foreign medical team. Additionally, ovarian cancer was detected in her 42-year-old sister (III-10) living in Morocco by transvaginal pelvic ultrasound with colour Doppler. This patient underwent salpingo-oophorectomy, and the histology revealed a papillary serous carcinoma, stage I, T2N0M0. She was treated with six adjuvant cycles of chemotherapy type taxol-carboplatin. A complete response was achieved.

In family 2, Patient IV-17 (Fig. 1B) was a carrier of the familial mutation c.5073dupA/p.Trp1692MetfsX3 in exon 11 of the BRCA2 gene, confirmed by DNA testing. Her mother (III-20) was identified as an obligate carrier. These two female patients are healthy with no cancer history and are under surveillance according to standard protocols (clinical breast examination semi-annually, annual mammography and breast magnetic resonance imaging screening, and annual transvaginal pelvic ultrasound with colour Doppler).

In family 3, genetic testing showed that the female patient identified as IV-31, and her mother (III-13; Fig. 1C) were not carriers of the familial BRCA1-185delAG mutation. The female individuals were informed that their risk of developing breast cancer does not differ from females of the same age in the general population.

Germline mutations in either of the two predisposing genes, BRCA1 and BRCA2, account for a significant proportion of hereditary breast and ovarian cancers. Approximately 10% of cases of ovarian cancer and 3–5% of cases of breast cancer are due to germline mutations in BRCA1 and BRCA2 (2). In the general population, it is estimated that approximately 1 in 300 to 1 in 800 individuals carry a mutation in BRCA1 or BRCA2 (3).

Among the North African population, the mutational spectrum of BRCA1/2 has yet to be well characterised. Mutation c.798_799delTT has been observed in two Algerian families, as well as in two Tunisian families presenting with breast cancer, indicating the first non-Jewish founder mutation to be described in Northern Africa (14).

The 185delAG mutation reported for the first time in females of two Moroccan families may be common in Morocco. Thus, further investigations into this mutation should be conducted in a larger cohort of patients. If the repeated occurrence of the 185delAG mutation is confirmed in the Moroccan population, this may simplify genetic testing and have clinical and public health implications.

The finding of the mutations in the three families enabled us to conduct DNA testing in 5 female individuals to determine whether they had inherited the familial BRCA mutation. Once a mutation was identified in the proband III-8 in family 1, the genetic status of two asymptomatic sisters was determined. The two sisters were found to be carriers of the familial BRCA1-185delAG mutation. Therefore, a medical follow-up of the two sisters was implemented. Surveillance imaging detected breast cancer by magnetic resonance imaging of the breast in a 48-year-old female (Patient III-2; Fig. 1A), and ovarian cancer was detected by transvaginal pelvic ultrasound with colour Doppler in her 42-year-old sister (Patient III-10; Fig. 1A); a complete response to treatment was achieved. In family 2, patient IV-17 (Fig. 1B) was a carrier of the familial mutation c.5073dupA/p.Trp1692MetfsX3 mutation of BRCA2. Consequently, her mother was identified as an obligate carrier. The two patients are healthy thus far, with no history of cancer, and are under supervision in accordance with standard protocols. This BRCA2 mutation confers an increased risk of developing breast or ovarian cancers depending on age and the penetrance of the mutation.

In family 3, genetic testing identified that patient IV-31 (Fig. 1C) and her mother were not carriers of the familial BRCA1 mutation. Consequenlty, it was determined that the risk of developing sporadic breast cancer is at a rate roughly equivalent to that of the general population. These female patients may have undergone unnecessary intervention, including prophylactic surgery. Thus, the availability of the BRCA analysis has beneficial impact on the care and counseling of female individuals at risk. Once a mutation is identified in an affected person, asymptomatic family members can subsequently be tested for this mutation, since first-degree relatives of patients with breast cancer have increased risk for early onset of this disease (17). Female individuals who remain untested for the gene mutation, but have a first-degree relative with a BRCA mutation, have a 36–85% lifetime risk of developing breast cancer, indicating a need for accurate, life-long surveillance. The American Cancer Society and the National Comprehensive Cancer Network recommend that magnetic resonance imaging be used in addition to, and not instead of mammography, this surveillance (18).

Genetic testing can be extremely valuable in the clinical process and for personal decision-making for high-risk families. The identification of a carrier of a BRCA mutation in a family is useful in the clinical management of the affected patient, but also provides appropriate recommendations for other members of the family. The identification of a family that is highly susceptible to hereditary cancer syndrome is the key to management of these families.

In conclusion, we report our initial experience in the management and presymptomatic diagnosis of breast cancer in three Moroccan families with hereditary breast and ovarian cancer syndrome and known BRCA1/2 gene mutations. Efforts are underway to reduce the high incidence and mortality associated with breast cancer on a global scale. Morocco, which has 30,000 new cases of cancer every year, has launched an ambitious national program of prevention and monitoring of cancer in the population for the decade 2010–2019. This program is based on the early detection of female individuals at high risk and should also integrate molecular testing and management of females with an increased familial risk of breast and ovarian cancers, since genetic predisposition is the strongest risk factor. Early detection is of high priority in the medical management of this diseasein order for recommendations to be made for public health action on molecular genetic testing and genetic counseling.

The authors extend their sincere thanks to all of the staff of the Department of Medical Genetics of the National Institute of Health for their continuous support. We are particularly thankful to Dr Rachid Tazi Ahnini for the indispensable editorial assistance. 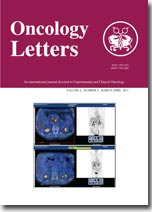