Malignant glioma is a highly invasive brain tumor resistant to conventional therapies. Secreted protein acidic and rich in cysteine (SPARC) has been shown to facilitate glioma invasion. However, the effects of SPARC on cell growth have yet to be adequately elucidated. In this study, we constructed a plasmid expressing shRNA against SPARC, evaluated the effect of SPARCshRNA on SPARC expression and then assessed its effect on cell growth in U-87MG cells. Using plasmid-delivered shRNA, we effectively suppressed SPARC expression in U-87MG cells. Cell growth curves and colony formation assay suggested that the introduction of SPARCshRNA resulted in an increase of cell growth and colony formation. We also showed that knockdown of SPARC expression was capable of promoting the cell cycle progression from the G1 to S phase. However, no difference was found in the level of apoptosis. A molecular analysis of signal mediators indicated that the inhibition of p-c-Raf (Ser259) and accumulation of p-GSK-3β (Ser9) and p-AKT (Ser473) may be connected with the growth promotion by SPARC shRNA. Our study may provide an insight into the biological function of SPARC in glioma. 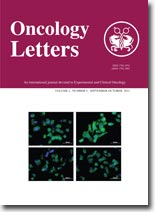