The insulin-like growth factor (IGF) system comprises two types of peptides (IGF‑I and IGF‑II), two types of receptors (IGF‑IR and IGF‑IIR) and six IGF‑binding proteins (BP). This system is mainly responsible for the growth and division of cells in the body, regulation of the cell cycle and prevention of apoptosis. The expression of IGF‑IR was assessed in the cells of resected primary colorectal tumours in 88 patients (age, 36-87 years; mean 64.78; males, 48 and females, 40) treated surgically at the Second Department of General and Gastroenterological Surgery, Medical University of Bialystok, Poland, in relation to various clinico-morphological factors. The post-operative material was analysed to find the histological type, location of lesions, lymph node involvement staging, distant metastases (pTNM classification), staging in Dukes' classification and the histopathological differentiation grade. The expression of IGF‑IR in colorectal cancer cells was assessed using an immunohistochemical method. The findings were subjected to statistical analysis (Chi-square test, multivariation test and Mann‑Whitney U test). A positive IGF‑IR expression (in at least 10% of cancer cells) was observed in 44 patients. The mean immunoreactive cell count for IGF‑IR in all of the tumours studied was 30.79%. The current study showed no correlation of IGF‑IR expression in colorectal cancer cells with characteristics such as age and gender of patients, tumour location, type, histological differentiation or histopathological advancement. Immunohistological determination of IGF‑IR expression in advanced colorectal cancer cells revealed controversial scores. Evaluation should be confirmed by using other methods and enhanced to include adenomas and early colorectal cancers.

Insulin-like growth factors, IGF-I and IGF-II, together with their receptors, IGF-IR and IGF-IIR, and IGF-BP form a coherent system that is responsible for the growth and division of cells in the body (1). The system of insulin-like growth factors includes two receptors: type I, which transmits signals through tyrosine kinase, and type II, which is identical to the mannose-6-phosphate receptor that does not transmit signals but inhibits the auto- and paracrine functions of IGF-II through its uptake and internalisation from the plasma (2).

The IGF-IR receptor is a heterotetramer (2α2β). The α subunits contain an IGF-I binding site, whereas the β subunits start the process of phosphorylation and synthesis of intracellular proteins (1). The activated IGF-IR regulates the cell proliferation processes by transmitting division signals, protecting cells against apoptosis, regulating adhesion processes or inducing growth and differentiation of cells (3-6). Rouyer-Fessard et al found IGF-IR expression in normal colorectal mucosa (7). When overexpressed, IGF-IR behaves as a cell oncogene. The presence or absence of this receptor affects transformation of various viral and cellular oncogenes (3). A higher density of IGF-IR has been noted in carcinomas of the colon, ovary, breast, thyroid and endometrium, Wilms’ tumours and gliomas (1,8,9).

IGF-I and IGF-II acting on IGF-IR in colorectal cancer prevent apoptosis, enhance cell proliferation and induce the expression of vascular endothelial growth factor (VEGF). Results of experiments conducted on mice showed that IGF-IR, through VEGF induction, accelerates tumour growth and the formation of metastases (5,10). However, the role of IGF-IR in cancer cells of the colon has yet to be fully elucidated. IGF-IR is frequently overexpressed in human colorectal cells. IGF-IR blockage results in the inhibition of growth and angiogenesis of colorectal carcinoma. A decrease in IGF-IR expression causes much apoptosis of cancer cells in vivo and in vitro. In experimental animal studies, IGF-IR hypoexpression is manifested as the inhibition of tumour and metastasis formation (6).

Taking the above into consideration, this study aimed to assess the expression of IGF-IR in colorectal cancer cells in correlation with certain clinico-morphological factors.

The study included 88 patients with primary colorectal carcinoma treated surgically at the Second Department of General and Gastroenterological Surgery, Medical University of Bialystok, Poland, in the years 1998-2003. The study group comprised 48 (54.6%) males and 40 (45.4%) females with an average age of 64.78 years (range 36-87). Twenty-eight (31.8%) patients were <60 years of age, and the remaining 60 (68.2%) patients were >60 years of age. As regards tumour location, the patients were divided into two groups. The first group included 43 (48.9%) patients with rectal carcinoma. The patients with carcinoma elsewhere in of the colon (45; 51.1%) constituted the other group. Patients underwent scheduled surgery. Eighteen (20.5%) patients had abdominoperineal excision of the rectum by the Miles method. In 27 (30.7%) patients, low anterior resection of the rectum was performed with an end-to-end anastomosis. Hartmann’s operation was carried out in 19 (21.6%) patients. Right-side hemicolectomy was performed in 17 (19.3%) patients, whereas left-side hemicolectomy was performed in 4 (4.5%) patients. A further 3 (3.4%) patients underwent segmental excision of the transverse colon.

Two specimens from each tumour were stained using an immunohistochemical method of evaluation. A standard avidin-biotin immunoperoxidase method (ABC Staining System, Santa Cruz Biotechnology, Santa Cruz, CA, USA) was used for the detection of IGF-IR expression. In all cases, specimens were obtained from the main mass of the tumour. The specimens were fixed in 40 g/l formaldehyde, embedded in paraffin and cut into 4-μm sections. The sections were dewaxed in three changes of xylene and hydrated through an alcohol series of a decreasing concentration. The sections were heated for 3 min in citrate buffer (10 mmol/l, pH 6.0) in a pressure cooker to expose the antigen. Endogenous peroxidase activity was blocked by incubating the sections in a 3% hydrogen peroxide solution in methanol for 5 min. The slides were then washed 3 times in phosphate-buffered saline (PBS) and incubated in normal horse serum for 5 min to reduce non-specific antibody binding. Following washing with PBS, the slides were incubated for 24 h at 4°C with monoclonal antibody (Anti-IGF-IR, β subunit, C-terminal clone CT-3) (H-60, Santa Cruz Biotechnology) at a dilution of 1:100 for all slides. The antigen-antibody complex was visualised by DAB chromogen (3′3-diamonobenzidine, Dako, Denmark). Following rinsing in distilled water, the sections were stained with hematoxylin, and following dehydration with an alcohol series of an increasing concentration the sections were mounted on a Canadian balsam. A light microscope was used for the analysis of the immunohistochemical reactions in colorectal carcinoma cases. The expression of IGF-IR was analysed in 10 various fields of vision, in which the mean percentage of the immunohistochemically positive cancer cells was determined (positive when >10% of carcinoma cells were IGF-IR-positive; negative when there was no reaction or ≤10% of cells were positive). Control immunohistochemical staining was performed; the positive control comprised IGF-IR-positive colorectal cancer specimens, in the negative control primary antibodies were omitted in the staining procedure. The negative control did not exhibit any specific immunostaining.

IGF-IR expression was assessed in 88 colorectal tumours. In 44 (50%) of the examined colorectal tumours an immunohistochemical reaction to IGF-IR was evident. The presence of an immunohistochemical reaction in at least 10% of cancer cells was referred to as a positive reaction. In all the tumours, the mean IGF-IR immunoreactive cell count was found to be 30.79%. The Mann-Whitney U test and multivariate analysis did not yield statistical differences.

The patients constituted two age groups: <60 and >60. The number of patients at these ages did not differ between the subgroups of patients with negative, moderate and high IGF-IR expression (Fig. 1).

The percentage of IGF-IR negative male patients (45.83%) was markedly lower in comparison to females (55%). Conversely, in the moderate IGF-IR subgroup, there were more male (27.08%) than female (20%) patients. These differences were not statistically significant (p>0.05, Fig. 2).

According to tumour location, the patients were divided into rectal carcinoma and colon carcinoma subgroups. No difference was observed in the immunohistochemical reaction to IGF-IR compared to the colorectal cancer location (Fig. 3).

In the TNM classification, with regard to the pT feature, the patients were divided into two groups: pT2 and pT3/pT4. No patient was included in the pT1 subgroup. For the pN and pM features, two groups were distinguished: patients with and without metastases (pN0, pM0 and pN1 and pM1, respectively). As for the tumour size, in the high IGF-IR expression subgroup the percentage of pT3/pT4 (25.32%) patients was statistically insignificantly lower as compared to pT2 (33.33%) patients. In the other subgroups, the percentage of patients was similar (Fig. 5). There were fewer patients with lymph node involvement than those without metastases in the negative IGF-IR expression subgroup (46 vs. 55%). However, in the low IGF-IR expression subgroup, the number of patients with lymph node involvement was higher as compared to the metastasis-free cases (29.17 vs. 17.5%). However, the difference was not statistically significant (p>0.05, Fig. 6). The percentage of patients with distant metastases (pM1) was markedly higher (60.00%) as compared to the metastasis-free subjects (pM0) (48.78%) in the negative IGF-IR expression subgroup, the difference being statistically insignificant (p>0.05). No differences were found in the remaining groups (Fig. 7).

According to Dukes’ classification, two subgroups were distinguished: Dukes’ B, and Dukes’ C and D. No Dukes’ A patients were found. This division was determined by the presence or absence of lymph node involvement. The percentage of Dukes’ C and D patients was markedly higher (28.57%) than Dukes’ B (17.95%) in the low IGF-IR expression subgroup; however, there was no statistical significance (p>0.05). Similar numbers of Dukes’ B, C and D patients were noted in the other subgroups of IGF-IR expression (Fig. 8).

The percentage of patients with a moderate histological differentiation grade was statistically insignificantly higher (G2: 53.57%) as compared to those with a low grade (G3: 41.94%) in the negative IGF-IR expression subgroup (p>0.05). No difference was found in the percentage of moderate and low-differentiated tumours in the remaining subgroups of IGF-IR expression (Fig. 9).

This study did not include patients with adenomas and only a few of the patients had early cancer. Teramukai et al assert that the plasma concentration of IGF-I may change during the carcinoma sequence of colorectal cancer (17). Estimation of the changes in IGF-IR expression in normal mucous, adenomas and early cancers of the large bowel appear to be justified.

Assessment of the number of cells with a positive immuno- histochemical reaction for IGF-IR may be applied when quali-fying patients for therapy. As shown in certain publications, blockage of IGF-IR effectively increases cancer cell apoptosis (18). Anticancer therapy based on the action of one of the GH-IGF-IGFR axis links leads to high expectations, particularly for colorectal carcinoma (5). A number of studies have concluded that IGF-IR is the most promising target in anticancer therapy (16,18-22).

The majority of data concerning IGFs are based on in vitro studies. Studies in vivo are rare, and frequently provide contradictory and unclear evidence. Broader studies on IGFs are required (23), as they may aid in the search for an early detection mode and facilitate the design of effective anti-colorectal cancer therapy.

Based on the study findings, the following conclusions have been formulated: i) no correlation was found between IGF-IR expression and the clinical and pathomorphological factors studied, ii) a controversial low expression of IGF-IR in the advanced colorectal cancer cells studied delimits the usefulness of immunohistochemical assessment of IGF-IR in the prognosis of the course of the neoplastic process and simultaneously stimulates further investigations. 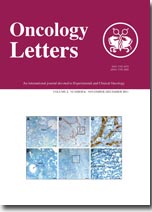