We designed a case-control study to determine the plasma homocysteine (Hcy) level and evaluate the potential role of the methylenetetrahydrofolate reductase (MTHFR) C677T gene polymorphism in colorectal cancer (CRC). Total Hcy was quantiﬁed using the ﬂuorescence polarization immunoassay (FPIA) on the IMx analyzer. Genomic DNA was analyzed by the real-time polymerase chain reaction (RT-PCR). The plasma levels of Hcy in the CRC group (12.63±3.11 µmol/l) were significantly higher compared with those in the control group (10.87±2.42 µmol/l; P<0.05). The frequency of the MTHFR 677TT genotype in CRC patients was markedly high. The MTHFR 677TT genotype was significantly correlated with an increased risk of CRC (odds ratio, 1.671; 95% confidence interval, 1.094-2.553; P=0.018). This study suggests that the MTHFR C677T polymorphism indicates susceptibility to CRC and is correlated with CRC pathogenesis, suggesting that the homozygous variant MTHFR C677T polymorphism is a candidate risk factor for CRC.

Colorectal cancer (CRC) is one of the most common malignant diseases worldwide, affecting men and women approximately equally. There are several biological mechanisms by which folate deficiency increases the risk of CRC (1–3). Folate may modulate DNA methylation, which is a significant epigenetic determinant in gene expression, the maintenance of DNA integrity and stability, chromosomal modifications and the development of mutations. A growing body of evidence from in vitro, animal and human studies indicates that folate deficiency is associated with DNA strand breaks, impaired DNA repair, increased mutations and aberrant DNA methylation, and that folate supplementation corrects some of these defects (4).

Findings of previous epidemiological studies suggested that the elevation of plasma homocysteine (Hcy) levels is an independent risk factor for CRC (5,6), although the mechanism remains unknown. A defect in the methylenetetrahydrofolate reductase (MTHFR) gene and a deficiency of folate may lead to the accumulation of Hcy in tissues and blood.

We conducted a hospital-based case-control study to assess the association between Hcy levels, the MTHFR C677T gene polymorphism and genetic susceptibility to CRC. The cases were 370 patients diagnosed with CRC attending Shandong Provincial Hospital, Shandong University (Jinan, China), between March 2008 and December 2010. These patients had CRC at stages A, B or C, according to Dukes’ classification, and all underwent elective and curative surgery. Of the 370 patients, 204 were male and 166 were female. The mean age was 49.3±8.2 years (range, 35–78). The subsite distribution of the 93 CRCs showed 19 in the right colon, 6 in the transverse colon, 45 in the left colon and 23 in the rectum. Diagnosis of adenocarcinoma was confirmed in all patients by histology and cytological investigations. Histopathological grading of adenocarcinoma was: 5% well-differentiated, 74% moderately differentiated and 21% poorly differentiated. A total of 370 healthy unrelated subjects were recruited into the control group after being interviewed with regard to whether they had been diagnosed with colorectal carcinoma or associated diseases, using age and gender as frequency-matching criteria. The mean age of the normal donors was 47.3±8.1 years (range, 32–74); 196 (53.0%) of the healthy subjects were male and 174 (47.0%) were female. The characteristics of the study population are shown in Table I. Informed consent was obtained from all study subjects following an explanation of the nature of the study. The study was approved by the Shandong University Research Ethics Committee, China.

Peripheral venous blood was obtained from each subject and genomic DNA was extracted using a DNA extraction kit (Qiagen, Crawley, UK) according to the manufacturer’s instructions. The specimens were stored at −70°C until use. Total Hcy was quantified using the fluorescence polarization immunoassay (FPIA) on the IMx analyzer from Abbott Laboratories (Abbott Park, IL, USA). The IMx Hcy assay is based on the reduction of the plasma samples with dithiothreitol and subsequent conversion of free Hcy to S-adenosyl homocysteine by hydrolase in the presence of added adenosine. The sample and the tracer compete in binding to the monoclonal antibody. This reaction is followed by the detection of S-adenosyl homocysteine by an FPIA. The concentration of Hcy in plasma is inversely correlated with the intensity of the polarized light.

Genomic DNA was detected by real-time polymerase chain reaction (RT-PCR) amplification followed by digestion with the restriction enzyme HinFI, as described by Frosst et al (12). The primers were designed as previously reported, with the following sequences for sense, 5′-GCCCAGCCACTCACTGTTTTA-3′, and antisense, 5′-AGGACGGTGCGGTGAGAGTG-3′, that were used in a 25-μl mixture for amplification. The cycling conditions for PCR were an initial denaturation of 5 min at 94°C, followed by 30 cycles of 40 sec at 94°C, annealing at 56°C for 4 sec and extension at 72°C for 12 sec. A final extension step for 7 min at 72°C was also carried out. The products were stored at 4°C. Amplified products were later mixed and buffered with restriction endonuclease HinFI and sustained in the water bath kettle overnight for digestion. The products were observed following polyacrylamide gel electrophoresis.

Statistical analyses were performed using SPSS 13.0 statistical software (SPSS Inc., Chicago, IL, USA) and data were shown as the mean ± standard deviation. Comparisons between the two groups were performed by the independent t-test; χ2 analysis was applied to determine the difference in the genotype and gene frequency. Odds ratios (ORs) and 95% confidence intervals (CIs) were calculated from unconditional logistic regression models. P<0.05 was considered to indicate a statistically significant result.

[i] In the control group, the three genotypes have a distribution in Hardy-Weinberg equilibrium, χ2=0.066, P=0.967. MTHFR, methylenetetrahydrofolate reductase.

[i] TT genotype and T allele were significantly higher in frequency in the CRC group than in the control group. MTHFR, methylenetetrahydrofolate reductase; CRC, colorectal cancer.

In the general population, hyperhomocysteinemia has been found to be associated with the occurrence of adenomas and CRC (6). However, in the absence of low serum folate, the presence of a mutation of the MTHFR gene which is responsible for hyperhomocysteinemia has not been identified as an oncogenic risk factor. Hcy is formed from methionine and is either catabolized in the vitamin B6-dependent transsulfuration pathway or remethylated into methionine (13). This latter reaction is catalyzed by methionine synthase, which requires 5-methyltetrahydrofolate as a substrate and vitamin B12 as a co-factor; 5-methyltetrahydrofolate is formed by the reduction of 5,10-methylenetetrahydrofolate by MTHFR, which is a regulating enzyme in Hcy metabolism. A 677C-T mutation was detected in the MTHFR gene and homozygosity for this genotype was found to be associated with a decreased specific enzyme activity and elevated Hcy.

MTHFR is an essential enzyme in the metabolism of folic acid and catalyzes the irreversible reduction of 5,10-methylenetetrahydrofolate to 5-methyltetrahydrofolate (14). A change of C to T at nucleotide 677 in MTHFR C677T results in an amino acid sequence change of an alanine to valine, and this protein is associated with reduced enzyme activity that leads to reduced plasma folate levels. The low enzyme activity of MTHFR C677T variant genotypes is associated with DNA hypomethylation, which may induce genomic instability and thereby affect the expression of oncogenes or tumor suppressor genes.

It has been shown that Hcy levels are positively associated with the proliferation rates of cells in a variety of tumors (15,16), as well as with oxidative damage to cells. Hcy has been considered to possess antioxidant properties through its rate-limiting role in the biosynthesis of glutathione, the intracellular antioxidant and detoxifying agent (17,18). However, evidence from in vivo and in vitro studies suggests that Hcy acts as a pro-oxidant agent that causes DNA oxidative damage as a result of the overproduction of free radicals and hydrogen peroxide, leading to gene mutation and subsequent cancer development. Elevated levels of Hcy are also associated with several metabolic disorders, including high body mass index, high plasma triglyceride levels, hypertension and the abnormal oxidation of low-density lipoproteins (19), which may lead to the development of several types of cancer, including CRC.

A number of studies concerning the molecular mechanisms of hyperhomocysteinemia in oncogenesis have been performed. It is known that Hcy levels are raised in colic tissue in inflammatory bowel disease (20). The increase in homocysteinemia may present an oncogenic risk in two ways. Firstly, it increases cellular oxidative stress by stimulating and increasing the secretion of proinflammatory cytokines, including TNF and IL-12 (21). Chronic inflammation is now known to increase carcinogenic risk. Secondly, hyperhomocysteinemia is responsible for a fault in cellular methylation (22). Hypomethylated DNA is unstable and subject to breakage of DNA strands. In the case of the hypomethylation of DNA, there is an increase in the number of non-methylated cytosines, which are deaminated in uracyls and therefore are incorporated more easily. Uracyl DNA glycosylase repairs these errors by excising the abnormally present uracyls in the DNA, thus creating temporary breaks (23). The likelihood of the two DNA strands breaking is increased, thus increasing carcinogenic risk.

In conclusion, the results of this study suggest that the MTHFR C677T polymorphism indicates susceptibility to CRC and is correlated with CRC pathogenesis. The plasma Hcy level in CRC patients was higher than that in healthy control subjects and the frequency of the MTHFR 677TT genotype in CRC patients was markedly increased when compared with healthy subjects. These findings suggest that the MTHFR C677T polymorphism is a candidate genetic risk factor for CRC. 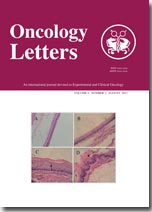