Adenomas of the adrenal cortex are usually asymptomatic and are discovered incidentally, when the diameter is 3–3.5 cm (1). Evidence has revealed that the risk of malignancy increases with increasing tumor size (2,3). Between 45 and 100% of adrenal tumors that are over 4 cm in diameter are diagnosed as malignant (4). Adrenocortical carcinomas are typically large at diagnosis, ranging from 3 to 20 cm in diameter, with distant metastases occurring in 20–50% of these cases (2).

In the present study, we describe the case of a 54-year-old female who was admitted to the Department of Oncosurgery at Anyang Tumor Hospital, Henan, China, with complaints of nonspecific right-sided upper abdominal pain accompanied with vomiting. These symptoms had commenced approximately 24 h earlier. Four months previously, an asymmetric distended abdomen had been observed. The patient’s medical history was insignificant and there had been no external trauma in the days prior to admission. Accompanied with haphalgesia, asymmetry in the abdomen and a right upper abdominal huge mass was discovered during a routine physical examination. The examination of the heart and lungs was unremarkable. No Cushing’s syndrome features were observed.

Laboratory parameters including tumor markers were all within the normal range. Ultrasonography demonstrated a solid mass in the right liver that measured 25x14.5 cm and was suggestive of an hepatic lesion. A mass in the right adrenal area, which made the right kidney lower than usual, was observed by intravenous pyelography. A computed tomography scan revealed a well-circumscribed mass of approximately 25 cm in diameter (25x20 cm) in the right liver which was smooth at the edge and had low-density imaging in the central tumor area. The right kidney, positioned lower than the normal location, was also observed (Fig. 1).

A retroperitoneal tumor was suspected. Surgical exploration was performed under general anesthesia. During surgery, a large tumor, which was covered with vessels, was found to occupy the area from the inferior part of the liver to the iliac bifurcation. Right hepatic lobe atrophy was found. The right kidney was compressed and situated at the bifurcation of the right iliac total artery. Vascular and capsular invasion were not present. Complete resection of the lesion was performed. The patient’s blood pressure and heart rhythm were stable during surgery. The post-operative course was unremarkable. The patient was asymptomatic when discharged 9 days after the operation.

Pathological examination revealed a centrally hemorrhagic tumor, 35x25x11 cm in size and weighing 7,500 g, surrounded by a thick fibrous capsule (Fig. 2). There was little normal adrenal tissue remaining. Necrosis and hemorrhage was observed in the central area of the tumor. Histologically, the tumor was composed of monomorphic clear cells with abundant microvesicular cytoplasm, which were arranged in trabecular or cord-like structures. The tumor cell nuclei were small and round and mitosis was rare. Fibrosis, adipose tissue and infiltration of multinucleated giant cells were found in limited areas.

The study was approved by the Ethics Committee of Anyang Tumor Hospital and Anyang Hygiene Bureau, China. Informed consent was obtained from the patient.

Unilateral tumors or masses of the adrenal gland are common. They are categorized as functional or nonfunctional, and as benign or malignant. The majority of adrenocortical tumors are benign, nonfunctioning adenomas that are discovered incidentally on abdominal imaging studies (5). Others are benign, hormone-secreting adenomas that cause Cushing’s syndrome, primary aldosteronism or much less commonly, virilization. Following the initial discovery of an adrenal mass, subsequent evaluation should determine whether it is benign or malignant and whether it is functional or nonfunctional, in order to determine treatment options.

Adrenal adenomas are common, benign adrenocortical tumors, with a diameter of 3–3.5 cm (1) and an incidence of 2.86% (6). When adrenal adenomas are very large, it is difficult to distinguish an adenoma from a carcinoma. Adrenocortical carcinomas are rare, extremely aggressive tumors that may be functional and are discovered as a result of the appearance of an abdominal mass or as an incidental finding. The differential diagnosis between malignant and benign tumors of the adrenal cortex can be difficult before surgery. The criteria for malignancy are distant metastases and/or local invasion. However, compared to adenomas, carcinomas are usually larger and occur at any age, including in children. According to previous reports, the risk of malignancy increases with increasing tumor size and the majority of tumors that were over 4 cm in diameter were diagnosed as malignant (7,8). In our study, the tumor was 35x25x11 cm in size, so the tumor should be diagnosed as malignant. However, in 1984, Weiss proposed that the presence of three or more of the following features was significant criteria for malignant clinical behavior: nuclear grade III or IV, mitotic rate >45/50 high-power fields, atypical mitoses, clear cells constituting <25%, more than 1/3 diffuse architecture, necrosis, sinusoidal, venous and capsular invasion (9,10). Referring to this criteria proposed by Weiss, the case we reported belongs to the benign category. In agreement with our study, Denzinger et al reported an adenoma of the adrenal cortex with a diameter of 18 cm, which ruptured spontaneously (2). Masugi et al also described a case of non-functional adrenocortical adenoma with a diameter of 5.5 cm (11). Thus, it was not surprising that the present tumor proved to be benign.

In summary, to the best of our knowledge, this is the largest case of nonfunctional adrenocortical adenoma reported to date. Careful clinical work and histopathological examination may help in determining the dignity of adrenocortical tumors, although difficulty remains in differentiating benign from malignant adrenal tumors, particularly in large tumors without invasive features and cellular atypia. 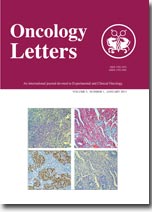