MicroRNAs (miRNAs) constitute a class of small non-coding RNAs 19–24 nucleotides in length that function as post-transcriptional regulators of gene expression (1). miRNAs exert important regulatory roles in the majority of cellular and developmental processes, and have been implicated in numerous human diseases, including cancer (2). Since their recent identification, the investigation of the potential for using extracellular and circulating miRNAs as non-invasive cancer biomarkers in body fluids, such as serum and plasma, has rapidly expanded (3,4). Circulating miRNAs are stabilized and protected from RNase degradation by incorporation into various protein complexes or membranous particles, including exosomes and microvesicles (4).

miRNA expression levels have been analyzed using traditional semi-quantitative methods, including northern blotting, bead-based flow-cytometry and microarray technology; however, reverse transcription-quantitative polymerase chain reaction (RT-qPCR) is the most sensitive, reproducible and widely used approach for the evaluation of miRNAs (10). To prevent errors in datasets and to overcome the experimental variation associated with RT-qPCR analysis procedures, such as RNA isolation, cDNA synthesis and PCR kinetics, the relative quantification of miRNAs through normalization to one or more stably expressed reference gene is the preferred approach (10). Suitable reference genes should be expressed constitutively and the expression levels should be unaffected by biological change, disease or treatment. The normalization of experimental gene RT-qPCR data to those of unreliable reference genes may result in incorrect quantification of the miRNAs of interest; the importance of validating suitable candidate endogenous control reference genes has been previously demonstrated (11–15).

Although several miRNA expression profiling studies in pleural effusion specimens have been performed (7–9,16), validation strategies for the selection of reference genes for normalization have, to the best of our knowledge, not been reported. Therefore, the aim of the present study was to identify suitable reference genes for normalizing the expression levels of circulating miRNAs in pleural effusion identified by RT-qPCR.

Pleural effusion samples were derived from 111 patients who visited Chungbuk National University Hospital (Cheongju, Korea) or Kangwon National University Hospital (Chuncheon, Korea) between February 2009 and September 2012. The pleural effusions were diagnosed as benign, as determined by the clinical context and the absence of malignant cells in at least two separate samples from the same patient. All lung adenocarcinoma-associated MPE (LA-MPE) samples were obtained from patients with tumors that were histologically and clinically diagnosed as primary adenocarcinoma of the lung, and that contained adenocarcinoma cells, as confirmed by pathologists. All samples were transported to the laboratory within 30 min of collection. The samples were then centrifuged at 11,300 × g for 5 min, and the supernatant and sediment fractions were aliquoted into separate microcentrifuge tubes and stored at −80°C prior to use. All patients provided written informed consent, and the study was reviewed and approved by the Institutional Review Board of Chungbuk National University Hospital.

RNA was extracted from 500 μl of each sample by the use of a Genolution urine miRNA purification kit (Genolution Pharmaceuticals, Inc., Seoul, Korea), according to the manufacturer’s instructions. The quantity of RNA extracted from each sample was examined using a NanoDrop ND-1000 spectrophotometer (Thermo Scientific, Wilmington, DE, USA).

Non-parametric tests [Mann-Whitney U test and Kruskal-Wallis one-way analysis of variance (ANOVA) with Dunn’s multiple comparisons correction] were used to determine any statistically significant differences between independent groups. Spearman’s correlation coefficients were used to calculate the associations between the clinical variables and the expression levels of the candidate reference genes. P<0.05 was considered to indicate a statistically significant difference. All statistical analyses were performed using SPSS software for Windows, version 15.0 (SPSS, Inc., Chicago, IL, USA). The NormFinder (http://moma.dk/normfinder-software) and BestKeeper (http://www.gene-quantification.de/bestkeeper.html) software programs were used to analyze the expression stabilities of the reference miRNAs. NormFinder is a Microsoft Excel add-in that uses an ANOVA-based model to calculate stability values from a panel of candidate genes in different subgroups by combining the intra- and inter-group expression variation (17). BestKeeper determines the geometric mean and coefficient of variance (18). Genes with standard deviation >1 were considered to be inconstant. Inter-gene associations were examined by pairwise correlation analysis. This calculation was used to determine whether the genes exhibited similar expression behavior. Candidate reference genes that exhibited high correlation with one another were included in the BestKeeper Index calculation. In the two programs, the lowest stability values indicate the most stably expressed genes. To determine the expression levels of the target miRNAs relative to suitable reference genes, the comparative ΔCt method was used, with the relative quantities (Qrel) calculated as follows: Qrel = 2−Δ(Cqtest sample − Cqnormalizer). When normalized to the sample volume, the relative expression level of a target miRNA was calculated as follows: Qrel = 2−Δ(Cqtest sample − Cqaverage of all samples).

The baseline characteristics of the patients in the validation cohort are listed in Table I. RT-qPCR was performed to further evaluate the expression patterns of the five candidate reference miRNAs identified by microarray analysis. A cohort of 91 pleural effusion samples, including 46 BPE samples and 45 LA-MPE samples, was used for the RT-qPCR experiments. Furthermore, the set of candidate reference miRNAs was extended by inclusion of the U6 snRNA, RNU6B, RNU44 and RNU48 small RNAs, which are commonly used for miRNA expression level normalization. Details of the functions and PCR amplification efficiencies of each of the candidate reference miRNAs and small RNAs are listed in Table II (19–25). To evaluate the range of detectable Cq values, the miR-192 expression levels in 10-fold serial dilutions of a pleural effusion sample were examined. A plot of Cq values versus the log concentration revealed a linear correlation for Cq values between 31 and 44 (Fig. 1). These results demonstrate that this method of measurement was appropriate for the present study. RNU6B, RNU44 and RNU48 were not detected in the majority of pleural effusion samples; therefore, these small RNAs were excluded from further analysis. The expression levels of the remaining six candidate reference genes, namely miR-192, miR-20a, miR-221, miR-222, miR-16 and U6 snRNA, varied widely across the samples tested, with Cq values ranging between 25.00 and 47.03 (Fig. 2A). The expression levels of all miRNAs did not differ significantly between BPE and LA-MPE samples (Fig. 2B). The expression levels of the five miRNAs and U6 snRNA in BPE and LA-MPE samples did not depend on age (Spearman’s rank correlation ranged between −0.002 and 0.128, P-value ranged from 0.305 to 0.988), gender (Mann-Whitney U test, P-value ranged between 0.279 and 0.808) or diagnosis (Kruskal-Wallis test, P-value ranged between 0.066 and 0.874).

Baseline characteristics of the patients.

a High expression stability is indicated by a low stability value.

Influence of reference genes on the relative quantification of miR-198

The selection of appropriate reference genes as normalizers for the relative quantification of miRNA expression levels is required to avoid erroneous results and to improve the comparability of miRNA expression level data amongst studies (10). The conventional approach to miRNA RT-qPCR data analysis is to normalize the values to the expression levels of snRNAs, such as U6 snRNA or RNU6B, or snoRNAs, such as RNU44 or RNU48. Alternatively, synthetic miRNAs, including ath-miR 156a or ath-miR 159a, are commonly added to the samples and used as normalizers. However, these miRNAs may exhibit variable expression levels depending on the samples used and may introduce noise when used as internal controls (11–15). Due to differences in length, the physicochemical properties, isolation efficiencies and degradation rates of small RNAs differ from those of miRNAs (26). In the present study, RNU6B was not detected in the majority of pleural effusion samples; the poor quality of RNU6B as a reference gene has previously been reported in miRNA expression studies of several other types of malignancy (11–14). Unlike miRNAs, RNU6B is a high molecular weight RNA that lacks resistance to degradation by RNase in body fluids (27); these properties may account for the low abundance of RNU6B in the pleural effusion samples included in the present study. Recent studies have also reported that snoRNAs exhibit highly variable levels of expression, and the use of these species as reference genes may introduce noise and result in inaccuracies in the data (15,28). Furthermore, the expression levels of snoRNAs have been associated with cancer prognosis in multiple studies (15,29,30). This evidence demonstrates that these molecules do not meet the requirement that reference genes be unaffected by biological changes, disease or treatments.

Non-human synthetic miRNA also frequently serves as a spike-in control to normalize for technical variability (31). In two recent studies that attempted to identify potential diagnostic or prognostic miRNA biomarkers in pleural effusion, the relative miRNA expression levels were directly normalized using ath-miR156a as a spiked-in reference gene (8,16). However, spike-in controls may not correct for the variability arising from differences in template quality and/or the efficiency of the reverse transcription reaction. Therefore, candidate reference genes must be validated for each individual study design, as even frequently used reference genes are unstable under certain conditions. Thus, the identification of a reference gene that is most suited to the specific samples and experimental conditions of the study is recommended.

The present study has certain limitations. A relatively small number of well-known miRNAs (160 of the >1,000 currently available) were screened using the PNA-based microarray. Furthermore, the number of candidate reference genes examined was small; the use of multiple reference genes is critical to achieve more reliable expression data (32). Another limitation of the study was that the identification of U6 snRNA and miR-192 as reference genes was only confirmed by normalization of the expression levels of a single miRNA (miR-198) in the pleural effusion samples. If further studies investigating miRNAs as potential diagnostic, prognostic and predictive biomarkers in pleural effusion are to be undertaken, the use of U6 snRNA and miR-192 as reference genes must be further validated. Another issue is that all MPE samples used in the present study were obtained from lung adenocarcinoma specimens; whether U6 snRNA and miR-192 may be used as reference genes for other types of MPE remains to be determined.

In conclusion, the use of the expression levels of U6 snRNA, miR-192 or a combination of these genes for the relative quantification of miRNA expression levels in pleural effusion is recommended, as determined by the results from the present study.

This study was supported by a Basic Science Research Program through the National Research Foundation of Korea, funded by the Ministry of Education, Science and Technology (grant no. 2007-0054930). All effusion samples examined in this study were provided by Chungbuk National University Hospital and Kangwon National University Hospital, members of the National Biobank of Korea, which is supported by the Ministry of Health, Welfare and Family Affairs. All samples derived from the National Biobank of Korea were obtained with informed consent under procedures approved by the institutional review board. The authors appreciate the assistance of the cancer research team at the Bioevaluation Center (Korea Research Institute of Bioscience and Biotechnology, Cheongju, Republic of Korea). 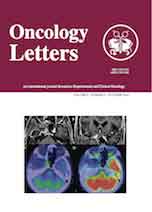