FOXL2 is a transcription factor that is essential for ovarian development. Somatic mutations of FOXL2 are associated with ovarian granulosa cell tumorigenesis. In the present study, the expression of FOXL2 was suppressed by microRNAs using the Ago2 knockdown method in COV434 cells. Online bioinformatics tools were utilized to predict that FOXL2 expression may be repressed by miR‑30 family members, and dual luciferase assay and western blotting were performed to demonstrate that FOXL2 is a target gene of miR‑30a, which is relatively abundant in COV434 cells. Furthermore, miR‑30a overexpression upregulates BCL2A1, IER3 and cyclin D2 expression by inhibiting FOXL2. miR‑30a is known to function as a tumor suppressor in breast cancer, small cell lung cancer and colorectal carcinoma; however, the present study revealed an opposing function of miR‑30a as an oncogene.

FOXL2, a Forkhead box family transcription factor initially described in Drosophila, is predominantly expressed in periocular, ovarian and pituitary cells. FOXL2 was first cloned and localized by Crisponi et al (1) and is mutated in blepharophimosis ptosis epicanthus inversus syndrome (BPES), a genetic disorder characterized by eyelid malformations. More than two-thirds of BPES patients carry intragenic FOXL2 mutations and one-third of mutations in the FOXL2 coding region are expansions of the polyalanine tract, from 14 to 24 residues (2,3). Furthermore, heterozygous mutations in FOXL2 result in premature ovarian failure and infertility in females (4).

FOXL2 functions as a transcriptional repressor and requires sumoylation and phosphorylation for its activity (5,6). Somatic mutations of FOXL2 have been reported to reduce its activity and may be associated with enhanced cancer cell proliferation, accelerated cell cycle progression and reduced sensitivity to apoptosis (7). In addition, genes that are differentially expressed in ovarian granulosa cell tumors (GCTs) are significantly enriched for known FOXL2 target genes, consistent with the prevalence of FOXL2 somatic mutations in these tumors (8).

MicroRNAs (miRNAs) are short non-coding RNAs which modulate gene expression by binding to complementary areas in the 3′-untranslated region of protein-coding gene mRNA. miRNAs are important in maintaining normal physiological conditions in humans, and abnormal miRNA expression has been associated with numerous human diseases, including psychiatric disorders and malignant cancer (9–11). Bioinformatics research has indicated that all of the miRNAs may target >60% of mammalian protein-coding genes (12).

siRNAs against Ago2, miR-30a mimic and miR-30a inhibitor were purchased from RiboBio Co., Ltd. (Guangzhou, China) and transfected into COV434 cells at a concentration of 200 nM.

FOXL2 expression is regulated by miRNAs

To explore whether the expression of FOXL2 is regulated by miRNAs, Ago2, a key component of the RNA-induced silencing complex, was knocked down in COV434 cells. This knockdown demonstrated that inactivation of the miRNA system results in upregulation of FOXL2 expression (Fig. 1A), indicating that miRNAs are involved in the negative control of FOXL2 expression.

TargetScan Release 6.2 (http://www.targetscan.org/), an online tool for predicting the interaction between miRNAs and genes, was used to probe miRNAs which may suppress FOXL2 expression. Of the candidate miRNAs, miR-30 family members were reported to be associated with various types of human cancer, and the expression of miR-30a was high in COV434 cells, compared with the other miRNAs evaluated (Fig. 1B). Thus, miR-30a was selected for further investigation of its role in the repression of FOXL2 expression. As demonstrated in Fig. 2A, a the full length 3′-UTR of FOXL2 was cloned into the pGL3 control plasmid, downstream of the firefly luciferase coding region, and a dual luciferase assay was conducted. COV434 cells were co-transfected with pGL3-FOXL2 and miR-30a mimics or inhibitors (Fig. 2Ba). The present study identified that luciferase activity was significantly suppressed by the miRNA control compared with the miR-30a mimic (~32.0%; P<0.05). Furthermore, luciferase activity was significantly upregulated by the miR-30a inhibitor compared with the anti-miR control (~18.2%; P<0.05). These results indicate that miR-30a targets the 3′-UTR of FOXL2, resulting in altered translation of the firefly luciferase gene.

A seed sequence mutation clone was used to clarify the location of the miR-30a binding site (Fig. 2A). A four-nucleotide mutation in the putative miR-30a binding region of the FOXL2 3′-UTR (termed, pGL3-FOXL2-Mu) and an empty pGL3 vector were used as the controls. The histogram in Fig. 2Bb demonstrates that the relative luciferase activity was reduced by ~32.6% in cells co-transfected with the miR-30a mimic and pGL3-FOXL2 compared with the miR-30a mimic and pGL3-FOXL2-Mu (P<0.01). These data indicate that miR-30a may suppress FOXL2 gene expression through binding to the seed sequence at the 3′-UTR of FOXL2, and that FOXL2 may be a direct target of miR-30a.

Although FOXL2 was identified as a target gene for miR-30a, it was unknown whether miR-30a could regulate endogenous FOXL2 expression. COV434 cells were transfected with miR-30a mimics or inhibitors to investigate whether the dysregulation of miR-30a expression affected endogenous FOXL2 expression. Compared with the corresponding control, the level of FOXL2 protein was significantly suppressed by miR-30a mimics and upregulated by miR-30a inhibitors (Fig. 2C).

FOXL2 is involved in craniofacial and female genital system development, and FOXL2 mutations can result in the development of BPES, ovary failure and GCTs (2,14,15). Studies have indicated that FOXL2 is significantly downregulated in the COV434 GCT cell line, despite no alterations to the genomic DNA (16,17). Therefore, the present study aimed to investigate the negative control system of FOXL2 expression. Since miRNAs regulate a large proportion of protein-coding genes, Ago2 was initially knocked down to evaluate the effect of miRNAs on FOXL2 expression. This Ago2 knockdown resulted in a significantly upregulation of FOXL2 expression. Following prediction using bioinformatics tools and clarification by dual luciferase assay and western blotting, miR-30a was identified to repress FOXL2 in COV434 cells. Furthermore, this repression function was reflected in the upregulation of genes regulated by FOXL2.

As a transcriptional repressor, FOXL2 suppresses BCL2A1, IER3 and cyclin D2 gene expression in granulosa cells (18–20). BCL2A1 and IER3 are apoptosis inhibitors, whereas cyclin D2 is a cell cycle-associated gene which regulates G1/S transition. High expression levels of these genes have been observed in ovarian and testicular tumors.

miRNA is a type of post-transcriptional suppressor and a single miRNA may regulate hundreds of protein-coding genes. In particular, miR-30a acts as a tumor suppressor in breast cancer, non-small cell lung cancer and colorectal carcinoma (21–23). However, the present study identified that miR-30a also acts as an oncogene by repressing FOXL2 expression in GCTs. In conclusion, further investigation is required to expand on the present research and evaluate the function of miR-30a in granulosa cell tumors and other types of cancer.

The present study was supported by the National Natural Science Foundation of China (grant no. 81272122) and the Science and Technology Research Program of Shandong, China (grant no. jk67). 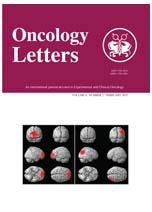