Although Japanese traditional herbal medicine (Kampo) has been widely applied to the treatment of various diseases, including cancer, their mechanisms of action have not yet been elucidated in detail, particularly regarding their role in tumor immunology. The present study investigated the antitumor effects of the Japanese Kampo medicine, ninjin'yoeito (NYT; Ren‑Shen‑Yang‑Rong‑Tang in Chinese), which was orally administered with or without an irradiated tumor cell vaccine to a subcutaneous CT26 colon carcinoma tumor model. The irradiated tumor cell vaccine in a prophylactic setting significantly delayed tumor growth in mice fed a control diet, whereas a diet containing NYT alone did not exert any antitumor effects in vivo. However, the inhibition of tumor growth was significantly greater in vaccinated mice fed the NYT diet compared with in vaccinated mice given the control diet. These results suggest that NYT synergistically enhances the effects of the antitumor vaccine. The depletion of cluster of differentiation (CD)8+ T cells abrogated these effects, indicating that antitumor activity required CD8+ T cells. Furthermore, reductions in CD4+ CD25+ and forkhead box protein 3+ T regulatory cell numbers were more apparent between vaccinated mice fed the NYT diet and non‑vaccinated mice fed the control diet than between vaccinated mice and non‑vaccinated mice fed the control diet, suggesting that the weaker impact of T regulatory cells contributes to the augmentation of antitumor immunity by CD8+ T cells in vaccinated mice fed with NYT. Overall, these results indicate that NYT synergistically enhances the effects of the prophylactic tumor vaccine mediated by CD8+ T cells and that this Japanese Kampo medicine has potential as a useful adjuvant agent for cancer immunotherapy.

Although herbal medicines have been widely used in Japan and elsewhere in Asia to treat various types of diseases based on their effects and safety for ~2,000 years, their mechanisms of action remain unclear. In Japan, patients with cancer are often treated with Japanese traditional herbal medicine (Kampo) in order to palliate a number of symptoms, including fatigue, malaise, anorexia, night sweats, cold limbs and anemia, which may be induced following current standard cancer treatments including surgery, chemotherapy and radiation therapy (8–10). Kampo products generally do not exert direct anticancer effects. However, juzentaihoto (JTT; Shi-Quan-Da-Bu-Tang in Chinese), which comprises ten herbs (Table I), has been reported to prevent the occurrence of cancer, such as estradiol-17β-induced endometrial carcinogenesis (11) and melanocytic tumors that spontaneously develop in RET proto-oncogene-transgenic mice (12). In addition, it has been demonstrated to suppress the liver metastasis of CT26-L5 colon carcinoma (13) and lung metastasis of B16 melanoma (14,15) in murine models. Furthermore, JTT was revealed to extend the length of intrahepatic recurrence in patients with hepatocellular carcinoma (16). These results suggest the augmentation of antitumor effects through the use of JTT.

Composition of NYT and JTT.

Ninjin'yoeito (NYT; Ren-Shen-Yang-Rong-Tang in Chinese) is another Japanese Kampo medicine that is frequently administered to patients with cancer (17). It comprises twelve herbs (Table I) and is used to treat various symptoms, such as fatigue, anorexia, night sweats, cough, malaise, insomnia, dry skin and dry mouth (18,19). NYT was previously reported to antagonize various forms of anemia, including iron-deficiency (20), aplastic (21), refractory (22) and ribavirin-induced anemia in the treatment of chronic hepatitis C (23). However, distinct from JTT, only one study appears to have investigated the ability of NYT to suppress the lung metastasis of CT26-L5 colon carcinoma in mice (24), even though eight herbs are common to NYT and JTT (Table I).

In the present study, the antitumor effects of NYT with or without an irradiated tumor cell vaccine were investigated in a prophylactic setting against s.c.-injected CT26 syngeneic colon carcinoma in BALB/c mice to evaluate the potential of NYT as a useful adjuvant for cancer immunotherapy.

Female, inbred BALB/c mice >6 weeks old and weighing 16–21 g were purchased from Charles River Japan (Tokyo, Japan). Each experiment comprised 4–8 mice/group. The mice were housed in groups of five in filter cages, and maintained in a temperature-controlled and pathogen-free animal facility with a 14 h light/10 h dark cycle, with ad libitum access to water and the described diets. All experiments were approved by the Animal Care and Use Committee at Nippon Medical School (Tokyo, Japan).

Irradiated (20,000 rad) CT26 cells (1×105) were s.c. injected into various groups of mice. Vaccinated or unvaccinated mice were fed the control, NYT, or JTT diet from the time of vaccination until four weeks following the inoculation with live tumor cells. Three weeks following the vaccination, 1×106 live CT26 cells were s.c. injected into these mice. In certain experiments, vaccinated mice fed the control or NYT diet were intraperitoneally injected with 0.5 mg of the anti-cluster of differentiation (CD) 8 monoclonal antibody (clone. 2.43, cat. no. TIB-210; ATCC) purified from pooled murine ascites using HiTrap Protein G HP Columns (GE Healthcare Life Sciences, Chalfont, UK) 1 and 2 days prior to, and 4, 7 and 10 days following the inoculation with live tumor cells.

The cells were washed once with 2 ml of cold Dulbecco's phosphate buffered saline (Thermo Fisher Scientific, Inc.) and then fixed with 1 ml of fixation/permeabilization solution (eBioscience) at 4°C for 30 min to allow intracellular staining. Fixed cells were washed twice with 2 ml of 1X permeabilization buffer (eBioscience) and then stained with 0.4 µg of PE-conjugated anti-Foxp3 (clone, FJK-16s; cat. no. 12-5773-80; eBioscience) at 4°C for 30 min. After washing twice with 2 ml of 1X permeabilization buffer, the fluorescence intensity of the stained cells was measured using FACSCanto (BD Biosciences) and the data were analyzed using FlowJo software (version 9.3.1; Tree Star, Inc., Ashland, OR, USA).

In order to clarify whether tumor growth was directly suppressed by NYT in vivo, BALB/c mice were fed the control or NYT diet for three weeks and then inoculated with 1×106 live CT26 cells. The mice continued to be fed the same diets until four weeks following the tumor cell inoculation. As illustrated in Fig. 1A, NYT did not affect tumor growth, indicating that NYT alone does not exert any antitumor effects in vivo.

In order to elucidate whether CD8+ T cells mediate the enhanced antitumor response observed in vaccinated mice fed the NYT diet, CD8+ cells were depleted in vivo. As illustrated in Fig. 2, the anti-CD8 treatment in vivo abrogated antitumor effects in vaccinated mice fed NYT. These results indicate that the protection induced by the whole-cell vaccine and NYT is dependent on CD8, as is that induced by the vaccine alone.

A recent study reported that JTT exerted immune adjuvant effects for tumor vaccines in another murine tumor model (31). Since eight herbs are common to NYT and JTT (Table I), whether JTT also enhanced tumor vaccine efficacy as well as NYT was investigated. The direct antitumor effects exerted by JTT were examined in vivo by taking JTT diet for 3 weeks prior to, and for 4 weeks after the inoculation with 1×106 live CT26. As illustrated in Fig. 4A, orally administered JTT without the vaccination did not have any antitumor effects in vivo. It was then examined whether JTT acts synergistically with an anticancer vaccine in a similar manner as that described in Fig. 1B. Although a significantly longer delay was observed in tumor growth in whole tumor-cell vaccinated mice regardless of JTT than in non-vaccinated mice, no significant difference was noted in tumor sizes between the vaccine plus control and vaccine plus JTT diet group (Fig. 4B). These results indicate that unlike NYT, JTT did not function as an adjuvant for the tumor vaccine in the s.c. CT26 tumor model, even though most ingredients are common.

The present study investigated the antitumor effects of NYT combined with or without a whole-cell vaccine in model mice s.c. injected with CT26 tumor cells. NYT alone did not exert any antitumor effects against CT26, whereas a whole-cell vaccine alone significantly delayed tumor growth, as previously described (32). However, the inhibition of tumor growth was significantly greater in vaccinated mice fed the NYT diet compared with in those fed the control diet. These results suggest that NYT synergistically enhances the effects of the whole-cell vaccine. Since the depletion of CD8+ T cells in vivo resulted in a complete loss of protection from tumors in vaccinated mice treated with NYT, it is suggested that CD8+ T cells mediate the protection.

Since eight herbs are common to NYT and JTT, and Takeno et al (31) recently demonstrated the immune adjuvant effects of JTT on tumor vaccine therapy in another murine tumor model, whether JTT also enhances antitumor vaccine effects was investigated in a s.c. CT26 tumor model in the present study. However, JTT did not exhibit any direct antitumor effects and failed to enhance tumor vaccine efficacy. The possibility that immune adjuvant activity in NYT may depend on a difference in the ratio of these eight common ingredients cannot be excluded. Furthermore, these results indicate that the following four herbs: Polygalae radix, Schisandrae fructus, Atractylodis rhizoma and Aurantii nobilis pericarpium, included in NYT, but not in JTT serve an essential role in exerting these immune adjuvant effects. In accordance with this hypothesis, onjisaponin isolated from Polygalae radix has been reported to provide safe and potent adjuvants for the intranasal inoculation of influenza HA, and DPT vaccines by inducing antigen-specific IgA antibodies in nasal washes (36). Furthermore, the topical application of gomisin A, a dibenzocyclooctadiene lignan isolated from Schisandara fructus, inhibited tumor promotion by 12-O-tetradecanoylphorbol-13-acetate in two-stage carcinogenesis of mouse skin cells (37). Therefore, further studies are required in order to elucidate whether onjisaponin and gomisin A perform essential roles in the enhanced anticancer vaccine effects observed in the murine tumor model used in the current study.

NYT has also been reported to inhibit the development of proteinuria and prolong the survival of MRL/lpr mice that develop a systemic lupus erythematosus-like autoimmune disease including autoimmune nephritis, possibly through the suppression of active TGF-β (38). Since our previous study revealed that inhibiting TGF-β using an anti-TGF-β antibody synergistically enhanced the effects of a tumor-cell vaccine mediated by CD8+ T cells (32,39), NYT may similarly suppress the active form of TGF-β in vaccinated mice, leading to more improved protection from tumor growth. These issues warrant further investigation.

Immune checkpoint inhibitors, such as the anti-CTLA-4 antibody and anti-PD-1 antibody have recently led to significant clinical advances in cancer immunotherapy (5,6). However, safety concerns have been expressed as CTLA-4 and PD-1 are included in co-inhibitory molecules and a disruption in the functioning of these immune checkpoint molecules may cause imbalances in immunological tolerance that result in an unchecked immune response, ultimately leading to irAEs (7,40). Furthermore, these agents are usually expensive (41,42). However, traditional herbal medicines, including Kampo medicine, have been selected from numerous primitive phytomedicines and developed based on their effects, and safety over a period of ~2,000 years in East Asia, including Japan (43). Therefore, these medicines are considered to be essentially free of deleterious side effects; however, reliable statistical evidence from large-scale controlled studies to support this assertion is limited or absent. In accordance with these notions, no adverse effects were identified in the mice fed on the NYT diet in the present study. In addition, various Kampo products have been available under the Japanese National Health Insurance System since 1976 and are cost-effective (43). The daily cost of NYT is ~0.4% that of immune checkpoint inhibitors (44). Therefore, NYT has potential as a relatively safe and more cost-effective adjuvant agent for enhancing antitumor immunity.

In conclusion, to the best of our knowledge, this is the first study to demonstrate synergistic enhancements in CD8+ T cell-mediated tumor vaccine efficacy by the oral administration of NYT. Although the underlying mechanism for the augmented anticancer vaccine effects induced by NYT have yet to be fully elucidated, the current study, in conjunction with previous findings on JTT presented by Takeno et al (31), provide a novel insight into the use of Japanese Kampo medicines as tumor vaccine adjuvants.

The present study was supported by the Ministry of Education, Culture, Sports, Science, and Technology (MEXT) KAKENHI, Japan (grant no. 24501335; received by S.T.). 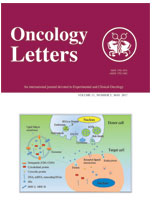