The epidermal growth factor receptor (EGFR) is a member of the human epidermal growth factor receptor (HER) family of receptor tyrosine kinases; it is a transmembrane receptor involved in cell growth and differentiation. EGFR homodimers or heterodimers in combination with other HER members, such as HER2 and HER3, activate downstream signaling cascades in many types of cancer, including oral squamous cell carcinoma (OSCC). The present study produced novel anti‑EGFR monoclonal antibodies (mAbs) possessing antibody‑dependent cellular cytotoxicity (ADCC) and complement‑dependent cytotoxicity (CDC), and investigated antitumor activity. Mice were immunized with an EGFR‑overexpressed glioblastoma cell line, LN229 (LN229/EGFR), after which ELISA was performed using recombinant EGFR. mAbs were subsequently selected according to their efficacy for LN229/EGFR, as determined via flow cytometry. After determining the subclass of mAbs, the EMab‑17 (IgG2a, kappa) clone exhibited ADCC and CDC activities against two OSCC cell lines, HSC‑2 and SAS. Furthermore, EMab‑17 exerted antitumor activities against mouse xenograft models using HSC‑2 and SAS, indicating that EMab‑17 may be used in an antibody‑based therapy for EGFR‑expressing OSCC.

Oral squamous cell carcinoma (OSCC) is usually treated by surgical removal; it can be complemented by chemotherapy, including cisplatin (CDDP), 5-fluorouracil (5-FU), and docetaxel (1,2), and/or radiotherapy, particularly at advanced stages. As an antibody drug, cetuximab, which is a mouse-human (IgG1) chimeric antibody against the epidermal growth factor receptor (EGFR), was approved for the treatment of head and neck cancer (HNC), including oral cancer (1). The effectiveness of cetuximab against locoregionally advanced head and neck squamous cell carcinoma (HNSCC) or recurrent and/or metastatic (R/M) HNSCC was reported in various clinical studies (1,3–5). Recently, nivolumab-a fully human IgG4 monoclonal antibody (mAb) against programmed cell death-1 (PD-1)-was approved for the treatment of R/M HNC previously treated with platinum-based chemotherapy (6). Furthermore, bevacizumab, which is a mouse-human IgG1 chimeric antibody against vascular endothelial growth factor first approved for colorectal cancer treatment, was the subject of clinical trials involving R/M HNSCC patients (7). Molecular targeting drugs that are clinically applicable for oral cancers are limited; therefore, novel drugs with greater efficacy and lower toxicity are required.

EGFR is a member of the human epidermal growth factor receptor (HER) family of receptor tyrosine kinases and involved in cell growth and differentiation (8–10). EGFR homodimers or heterodimers in conjunction with other HER members (such as HER2 and HER3) activate downstream signaling cascades. These pathways are frequently dysregulated via the overexpression of EGFR in many malignant tumors, including colorectal, lung, and breast cancers, brain tumors, head and neck cancers, pancreatic, kidney, and prostate cancers, and ovarian, bladder, and oral cancers (11).

In the previous research of this study, mice were immunized with purified recombinant EGFR to produce an EMab-134 monoclonal antibody (mAb; IgG1, kappa), which reacted with the endogenous EGFR of oral cancers in flow cytometry, Western blotting, and immunohistochemistry (12). In immunohistochemical analysis, EMab-134 stained 36 of 38 (94.7%) oral cancer specimens. The minimum epitope of EMab-134 was found to be the 377-RGDSFTHTPP−386 sequence (13). Although EMab-134 is a very useful mAb-targeting EGFR, the subclass was determined to be mouse IgG1, which did not exhibit antibody-dependent cellular cytotoxicity (ADCC) and complement-dependent cytotoxicity (CDC) activities. This study develops novel anti-EGFR mAbs possessing the ADCC and CDC activities of mouse IgG2a or the IgG2b subclass and investigates the antitumor activity.

All animal experiments were performed in accordance with relevant guidelines and regulations to minimize animal suffering and distress in the laboratory. Animal experiments described in the hybridoma production were approved by the Animal Care and Use Committee of Tohoku University (Permit number: 2016MdA-153). Mice were monitored for health every day. Animal studies for the antitumor activity were approved by the institutional committee for experiments of the Institute of Microbial Chemistry (Permit number: 2019-014). Mice were monitored for health and weight every 3 or 4 days. The duration of the experiment was three weeks. A body weight loss exceeding 25% of total body weight and a maximum tumor size exceeding 3,000 mm3 were defined as a humane endpoint.

One four-week-old female BALB/c mouse was purchased from CLEA Japan and housed under specific pathogen-free conditions. Anti-EGFR hybridomas were produced, as previously mentioned (15). The ectodomain of EGFR with N-terminal PA tag (16), C-terminal RAP tag (17), and MAP tag (14) (EGFRec) was purified from the supernatant of LN229/EGFRec using the anti-RAP tag previously described (17).

Six six-week-old female BALB/c nude mice were purchased from Charles River, and spleens were removed aseptically, and single-cell suspensions were obtained by dispersing the spleens using a syringe and pressing through stainless steel mesh. Erythrocytes were effectively lysed by 10-s exposure to ice-cold distilled water. Splenocytes were washed with DMEM and resuspended in DMEM with 10% FBS as effector cells. Target cells were labeled with 10-µg/ml Calcein AM (Thermo Fisher Scientific, Inc.) and resuspended in the medium. The target cells (2×104 cells/well) were placed in 96-well plates and mixed with effector cells, anti-EGFR antibodies, or control IgG (mouse IgG2a) (Sigma-Aldrich Corp.). After a 4-h incubation period, the Calcein AM release of supernatant from each well was measured. The fluorescence intensity was determined at an excitation wavelength of 485 nm and an emission wavelength of 538 nm using a microplate reader (Power Scan HT) (BioTek Instruments). Cytolytic activity (as % of lysis) was calculated using the following formula: % lysis=(E-S)/(M-S) ×100 (where E is the fluorescence released in the experimental cultures of target and effector cells, S is the spontaneous fluorescence released in cultures containing only target cells, and M is the maximum fluorescence obtained by adding a lysis buffer containing 0.5% Triton X-100, 10 mM Tris-HCl (pH 7.4), and 10 mM of EDTA to the target cells in order to lyse all cells).

HSC-2 and SAS cells were washed with DMEM lacking FBS to eliminate the growth factors present in the enriched medium. Then, the cells were plated in 96-well culture plates at a density of 2,000 cells per well in 100 µl of 0.1% dialyzed FBS with or without 50 ng/ml of EGF (PeproTech). MTS assay was performed after 12, 24, and 36 h.

Thirty-two six-week-old female BALB/c nude mice were purchased from Charles River and used in experiments at 7 weeks of age. HSC-2 or SAS (0.3 ml of 1.33×108/ml in RPMI) was mixed with 0.5 ml of BD Matrigel Matrix Growth Factor Reduced (BD Biosciences). A 100-µl suspension (containing 5×106 cells) was injected subcutaneously into the left flanks of nude mice. After day 1, 100 µg of EMab-17 and control mouse IgG (Sigma-Aldrich Corp.) in 100 µl of PBS was injected into the peritoneal cavity of each mouse, followed by additional antibody injections on days 7 and 14. Mice were monitored for health and weight every 3 or 4 days. The diameter and volume of the tumor were determined as previously described (18), and the mice were euthanized 21 days after cell implantation. The duration of the experiment was three weeks. A body weight loss exceeding 25% of total body weight was defined as a humane endpoint. All data was expressed as mean ± SEM, and statistical analysis was conducted using Tukey-Kramer's test; P<0.05 was considered to indicate a statistically significant difference.

Production and characterization of Anti-EGFR mAbs

In this study, one mouse was immunized with LN229/EGFR, and culture supernatants of hybridoma were screened for binding to purified EGFRec using ELISA. Flow cytometry was used as a second screening to assess reactions with LN229 and LN229/EGFR cells. LN229 cells express endogenous EGFR (15); therefore, a stronger reaction against LN229/EGFR was required. One clone was obtained-EMab-17 of IgG2a subclass-although almost all mAbs were determined to be a mouse IgG1 subclass like EMab-51 (15) or EMab-134 (12).

Flow cytometry was used to demonstrate a stronger reaction with EMab-17 LN229/EGFR than with endogenous EGFR-expressing LN229 brain tumor cells (Fig. 1A), which indicated that EMab-17 is EGFR-specific. As a positive control, EMab-51 demonstrated a similar reaction with LN229 and LN229/EGFR (Fig. 1B). Endogenous HSC-2 and HSC-3 OSCC cell lines were also identified with both EMab-17 and EMab-51 (Fig. 1C and D). Flow cytometry was again applied to determine the binding affinity of EMab-17 for SAS cells (Fig. 2) and calculated KD values for EMab-17 of 5.0×10−9 M against SAS. Similarly, KD values were determined for EMab-51 as 6.3×10−9 M against SAS (Fig. 2), revealing that both EMab-17 and EMab-51 possess a high affinity for EGFR-expressing cell lines.

This study examined whether EMab-17 induced ADCC and CDC in EGFR-expressing OSCC cell lines. EMab-17 was determined to be a mouse IgG2a subclass that might possess both ADCC and CDC (although mouse IgG1 such as EMab-51 and EMab-134 does not) (12,15). As detailed in Fig. 3A, EMab-17 exhibited high ADCC activity against HSC-2 and SAS. Furthermore, high CDC activity was also observed for HSC-2 and SAS by EMab-17 (Fig. 3B), suggesting that EMab-17 might exert antitumor activities in vivo. Although we added EGF to SAS and HSC-2, these cell lines did not grow well compared to control cells by responding to EGF stimulation (data not shown), indicating that EMab-17 could not neutralize EGF-EGFR axis.

Combined results confirm that EMab-17 exerted an antitumor activity against HSC-2 and SAS xenograft models via ADCC and CDC activities.

EGFR is the first receptor target using mAbs that has been developed for cancer treatment (19–21). This includes necitumumab (a fully human mAb; IgG1) for non-small cell lung cancers, panitumumab (a fully human mAb; IgG2) for colorectal cancers, and cetuximab (a human-mouse chimeric mAb; IgG1) for colorectal, head, and neck cancers. Anti-EGFR mAbs possess several functional mechanisms, including ADCC, CDC, blocking dimerization, and EGFR endocytosis. For investigating ADCC and CDC in mouse xenograft models, the subclass of mAbs should be IgG2a or IgG2b of mouse IgG (22), IgG2a or IgG2b of rat IgG (23), IgG1 of human IgG (24), or type B of canine IgG (25).

For the previous production of anti-EGFR mAbs (such as EMab-51 (15) or EMab-134 (12)), purified recombinant EGFR was immunized into mice. This methodology using cancer cell lines (such as LN229) for producing immunogen was previously identified as a CasMab method (26). Because almost all mAbs were determined to be a mouse IgG1 subclass like EMab-51 (15) or EMab-134 (12), it was not possible to investigate the antitumor activities of anti-EGFR mAbs that were produced using CasMab methods. Therefore, EMab-17 is the first anti-EGFR mAb of IgG2a or IgG2b that has been developed using the CasMab method.

In the present study, we added EGF to HSC-2 and SAS cell lines; however, these cell lines did not respond to EGF stimulation and did not grow well (data not shown), indicating that EMab-17 could not neutralize EGF-EGFR axis. Taken together, anti-tumor activities by EMab-17 were exerted by ADCC and CDC activities.

Unfortunately, EMab-17 was not suitable for Western blot and immunohistochemical analyses (data not shown); therefore, EMab-51 or EMab-134 should be used for diagnosing EGFR expression in cancer patients. In subsequent future studies, the subclasses of EMab-51 and EMab-134 will be converted into the mouse IgG2a subclass, and comparisons between ADCC/CDC activities and EMab-17 will be made.

In conclusion, this study successfully developed an anti-EGFR mAb of an IgG2a subclass-EMab-17-which demonstrated the antitumor activity via ADCC/CDC activities. EMab-17 could potentially be used for antibody-based therapy for EGFR-expressing OSCC.

JT and TO performed experiments. MKK analyzed experimental data. MK, HH and YK designed the current study and wrote the manuscript. All authors read and approved the final manuscript. 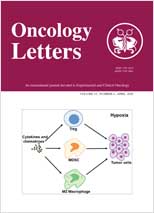