Colorectal carcinoma (CRC) is the fourth leading cause of cancer-related mortality worldwide, accounting for ~900,000 deaths annually in 2018 (1). The pathogenesis of CRC starts as low-grade dysplasia and often progresses slowly to form a polyp in the colorectal lumen, which eventually develops into a tumor with considerable size and symptoms (including pain, cramping and bleeding) (2). Therefore, most patients with CRC are at an advanced or metastatic stage when diagnosed, at which point tumor cells have already invaded into regional lymph nodes and spread into distal organs (such as the liver, lung and pancreas), which accounts for the major comorbidity in CRC (3,4). To overcome the aforementioned problems and develop therapeutic interventions, understanding the mechanism of CRC carcinogenesis (such as cell viability, invasion and stemness) is necessary.

Circular (circ)RNA is a type of non-coding RNA molecule, with a circular structure, which participates in gene regulation under both physiological and pathological conditions (5,6). Previous studies have demonstrated that circRNA molecules [such as circular homeodomain interacting protein kinase (circ-HIPK) 3, circular SWI/SNF-related, matrix-associated, actin-dependent regulator of chromatin, subfamily A, member 5 (circ-SMARCA5), circ_0026416 and circ_103809] were associated with CRC pathogenesis (7–10). circ_0001666, a recently identified circRNA derived from the circulation of FAM120B gene, regulates multiple microRNA (miRNA/miR) targets and downstream genes, such as ETS variant transcription factor 4, to promote papillary thyroid carcinoma cell proliferation and migration (11). Furthermore, a previous bioinformatics study demonstrated that, in CRC, circ_0001666 targeted miR-1229 as part of a circRNA/miRNA network (12). In addition, miR-1229 has been reported to regulate the Wnt/β-catenin signaling pathway to promote the malignancy of several cancer cell types. The Wnt/β-catenin signaling pathway is a key signaling pathway associated with oncogenesis, including in breast cancer, liver cancer and CRC (10,13–15). Based on these aforementioned studies, it may be hypothesized that circ_0001666 regulates the Wnt/β-catenin signaling pathway via miR-1229 in CRC. However, to the best of our knowledge, this hypothesis has yet to be investigated.

The aim of the present study was to examine the interaction between circ_0001666, miR-1229 and the Wnt/β-catenin signaling pathway, as well as the potential effect of this network on cell viability, invasion and stemness in CRC.

The 0.8 µg pCD5-ciR-NC (empty vector) (16), 0.8 µg pCD5-ciR-circ (the forward cloning primer, 5′-CGGAATTCACTGCTATACTCTCTTGTCCTTGTGA-3′ and reverse, 5′-CGGGATCCCAGCAACATGCGCTGACCAC-3′; expected product length, 13,733 bp), 0.8 µg pGPH1-NC 5′-CACCGAGTGAAACAGTGCAGCTGCGAACAGCTGCACTGTTTCAC-3′) and 0.8 µg pGPH1-circ (5′-CACCGATGACCATTCCAGATCCTTTCGAAAAAGGATCTGGAATGGTCATC-3′) plasmids were mixed with Lipofectamine® 3000 and transfected into the HT-29 and HCT-116 cell lines for 6 h at 37°C. Untransfected HT-29 and HCT-116 cell lines were also used as a control. At 24 h post-transfection, circ_0001666 and miR-1229 expression, cell proliferation, apoptosis and invasion, as well as the number of CD133+ cells were evaluated.

The cells were collected 48 h following transfection for RT-qPCR. Total RNA was isolated from the cells using TRIzol. Subsequently, for the determination of circ_0001666 expression levels, total RNA was digested using RNase R. The RT reagent kit was then used to reverse transcribe RNA to cDNA with thermal cycling conditions of 37°C for 15 min and 85°C for 5 sec. qPCR was performed using the TB Green Fast qPCR Mix (Takara Biotechnology Co., Ltd.) with an Applied Biosystems 7500 Real-Time PCR System (Applied Biosystems; Thermo Fisher Scientific, Inc.). The thermocycling conditions for qPCR were as follows: 95°C for 30 sec for 1 cycle; followed by 95°C for 5 sec and 61°C for 15 sec for 40 cycles. The 2−ΔΔCq method was used to calculate the relative expression levels of the targets (17). The following primer sequences were used: i) circ_0001666 forward, 5′-TCTACTCACTCTTACTGGAGGACTG-3′ and reverse, 5′-CTTGCTTCGGTGGTGCTCTG-3′; expected product length, 252 bp; ii) GAPDH forward, 5′-GAGTCCACTGGCGTCTTCAC-3′ and reverse, 5′-ATCTTGAGGCTGTTGTCATACTTCT-3′; expected product length, 149 bp; iii miR-1229 forward, 5′-ACACTCCAGCTGGGCTCTCACCACTGCCCT-3′ and reverse, 5′-TGTCGTGGAGTCGGCAATTC-3′; expected product length, 64 bp; and iv) U6 forward, 5′-GCTCGCTTCGGCAGCACATA-3′ and reverse, 5′-AATATGGAACGCTTCACGAATTTGC-3′; expected product length, 102 bp. The detailed procedure of designing circ_0001666 primers were in accordance with a previous study (18). In addition, the forward and reverse primers for miR-1229 were design according to previous studies (19,20).

CCK-8 assay solution was added and incubated with the cells 0, 24, 48 and 72 h post-transfection. After a 2-h incubation, the optical density was measured using a microplate reader.

A total of 5×104 cells were harvested 48 h following transfection and counted. The cells in FBS-free McCoy's 5a medium were then seeded in a Transwell chamber (cat. no. 353097, Corning, Inc.) pre-coated with Matrigel Basement Membrane Matrix (37°C for 60 min) and incubated for 24 h at 37°C. The lower chamber was filled with 10% FBS-containing McCoy's 5a medium. After being fixed with 4% paraformaldehyde for 30 min at room temperature, the cells on the bottom surface of the chamber were stained with crystal violet for 30 min at room temperature and counted under a light microscope. The stained cells were counted in five fields of view.

The cells were harvested and stained in the dark for 60 min on ice with Alexa Fluor® 488-conjugated rabbit monoclonal antibody against CD133 (cat. no. ab271092; 1:2,500) or Alexa Fluor® 488-conjugated rabbit IgG isotype control (cat. no. ab172730; 1:500) 48 h following transfection. The numbers of CD133+ cells were analyzed using a FACSCalibur flow cytometer (BD Biosciences) and Flowjo 7.6 (BD Biosciences). A general viable cell gate was used to exclude apoptotic and dying cells, and to distinguish cells based on size and granularity (22).

The binding site of circ_001666 and miR-1229 was predicted by RNAhybrid (https://bibiserv.cebitec.uni-bielefeld.de/rnahybrid). The wild-type (WT) or mutant type (MT) circ_0001666 DNA fragments were cloned into the pGL6 plasmid. The plasmid constructs were co-transfected with pGPU6-NC/pGPU6-miR into the 293T cell line (American Type Culture Collection) using Lipofectamine® 3000, according to the manufacturer's instructions. The cells were then lysed at 48 h after transfection and luciferase activity was detected using a Luciferase Reporter Gene Assay kit. The luciferase activity of the circ_0001666 WT/pGPU6 group was set as 1. The luciferase activity was normalized to Renilla luciferase activity. The 293T cells were cultured in 10% FBS-containing DMEM (HyClone; Cytiva) under 5% CO2 at 37°C.

FISH was used to detect the location of circ_0001666 expression in the CRC cell lines and to visualize circ_0001666 and miR-1229 binding. Briefly, the CRC cell lines were fixed at room temperature using 4% paraformaldehyde solution for 10 min at room temperature. Subsequently, the cells were permeabilized by 0.5% Tween X-100 at 4°C for 5 min and hybridized with 50 pM Cy3-labeled circ_0001666 probes (5′-AGATGACCATTCCAGATCCTT-3′) (Sangon Biotech Co., Ltd.) overnight at 37°C. After incubation, the cells were washed by 0.1% Tween 20 containing 4X saline-sodium citrate (SSC) for 5 min at 42°C, 2X SSC for 5 min at 42°C and 1X SSC for 5 min at 42°C, successively. DAPI was added for nuclear staining at room temperature for 10 min and the images were visualized under a fluorescence microscope. All procedures were conducted according to the Ribo™ Fluorescent In Situ Hybridization kit instructions (Guangzhou RiboBio Co., Ltd.).

All the data are presented as the mean ± SD and were analyzed using GraphPad Prism v7.01 (GraphPad Software, Inc.). To compare the differences between multiple groups one way ANOVA followed by Tukey's post hoc test was used. All experiments were conducted in triplicate. P<0.05 was considered to indicate a statistically significant difference.

In the HT-29 cell line, the numbers of CD133+ cells were reduced following circ_0001666 overexpression (P<0.01), but was increased following knockdown of expression (P<0.05) (Fig. 3A and B). Furthermore, the same results were observed in the HCT-116 cell line (Fig. 3C and D). The forward-side scatter cryptogram of CD133+ cell is displayed in Fig. S3. As CD133 is a biomarker for cancer stem cells, these findings indicated that circ_0001666 inhibited cancer stemness in the CRC cell lines (23).

To determine whether circ_0001666 regulated CRC cell function by targeting miR-1229, rescue experiments were performed. The transfection efficiencies of each plasmid in these experiments are shown in Fig. 5A and B. Western blot analysis indicated that, in the HT-29 cell line, miR-1229 overexpression reduced p-GSK-3β protein expression levels and increased those of β-catenin. In addition, it also attenuated the effect of circ_0001666 overexpression on the Wnt/β-catenin pathway (Fig. 5C and D). These data suggested that circ_0001666 regulated the Wnt/β-catenin pathway by targeting miR-1229 in CRC cells.

CRC places a huge medical burden across the world. The majority of patients with CRC are diagnosed at an advanced stage and miss the therapeutic window (2,3). Even after aggressive management, multiple recurrence and metastasis are often reported in patients with CRC resulting in an unfavourable survival profile (4). To further improve the CRC prognosis and individualize the management options are still a critical issue for clinicians.

As a newly identified circRNA, few studies have described the role of circ_0001666 in carcinogenesis, to the best of our knowledge. An in vitro study suggested that circ_0001666 regulated the expression levels of several miRNA targets (including miR-330-5p, miR-193a-5p and miR-326) to promote papillary thyroid carcinoma cell proliferation and migration (11). In addition, another study identified an immune-related risk signature of CRC, in which circ_0001666 was a critical component of a circRNA/miRNA/hub gene network (24). Furthermore, according to a bioinformatics study, circ_0001666 and miR-1229 may be involved in CRC pathogenesis (12). Despite these bioinformatics studies and the finding that circ_0001666 is part of an important competing endogenous RNA (ceRNA) network in CRC, the molecular mechanism underlying the role of circ_0001666 in CRC carcinogenesis has not been determined.

The results from the present in vitro study suggested that circ_0001666 inhibited cell proliferation, invasion and stemness in CRC. A possible reason to explain this result is that circ_0001666 overexpression reduces β-catenin protein expression, which, in turn, would increase the protein expression levels of E-cadherin, a key protein in intercellular junctions (25). Therefore, increased E-cadherin protein expression would lead to tightening of intercellular junctions, and eventually prevent local invasion and metastasis of CRC cells (25). It was also hypothesized that overexpression of circ_0001666 decreases cancer stemness, as evidenced by the reduced numbers of CD133+ cells in the present study; further experiments are required to validate this. Therefore, circ_0001666 overexpression would lead to reduced tumor cell formation and reduced tumor cell numbers.

A major role of circRNA molecules is to serve as ceRNA, which inhibit target miRNA expression and downstream gene regulation (26). miRNA is a type of small non-coding RNA involved in multiple cellular processes, including cell proliferation, differentiation and apoptosis (27). Accumulating evidence suggests that miRNA molecules are also involved in tumorigenesis, including CRC pathogenesis. A previous study demonstrated that miR-1229 was a target of circ_0001666, based on a circRNA/miRNA network analysis of CRC (12). In addition, miR-1229 promoted breast cancer cell proliferation and tumor growth by activating the Wnt/β-catenin signaling pathway (13). Furthermore, an in vivo study into CRC suggested that miR-1229 regulated the protein expression levels of HIPK2 and promoted angiogenesis, highlighting its oncogenic role in CRC (21). In the present study, miR-1229 promoted CRC cell proliferation, invasion and stemness.

Wnt/β-catenin is a signaling pathway with a critical role in cancer biology (10). Wnt binds to the surface receptor Frizzled and its coreceptor low-density lipoprotein receptor-related protein group 5/6, causing β-catenin to dissociate from its degradation complex, leading to transactivation of target genes (14). In addition to its function in normal physiological conditions, Wnt/β-catenin also plays a critical role in CRC pathogenesis by promoting cell proliferation, modulating epithelial-to-mesenchymal transition, disrupting intercellular junctions and regulating angiogenesis (14,15). A previous study suggested that miR-1229 regulated the Wnt/β-catenin signaling pathway to induce breast cancer cell malignancy (13). In the present study, circ_0001666 regulated the Wnt/β-catenin signaling pathway by targeting miR-1229 in the CRC cell lines. This finding could be explained as follows: miR-1229 overexpression upregulated p-GSK-3β protein expression levels and p-GSK-3β targeted β-catenin to regulate its activity (10). In addition, circ_0001666 overexpression resulted in the regulation of β-catenin protein expression. miR-1229 overexpression promoted cell proliferation, invasion and stemness to a greater extent than circ_0001666 overexpression in the CRC cell lines. These data suggested that the circ_0001666/miR-1229/β-catenin signaling pathway may represent a potential area for metastatic CRC therapeutic intervention.

In conclusion, circ_0001666 suppressed CRC cell proliferation, invasion and stemness by targeting miR-1229 and the Wnt/β-catenin signaling pathway, which may represent potential targets for CRC treatment.

This study was supported by The Hunan Province Health Committee of China (grant no. 20201427). 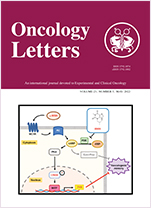