Abstract. Patients with primary cancer receiving chemotherapy and/or radiotherapy may develop therapy‑related acute leukemia (t‑AL). Therapy‑related acute myeloid leukemia (t‑AML) accounts for the majority of these cases and is frequently associated with a variety of cytogenetic and molecular abnormalities. The aim of the present study was to explore the clinical characteristics, treatments and prognosis of patients with t‑AML. A total of 272 cases of AML treated at our institution between 2016 and 2020 were reviewed, among which nine cases of t‑AML were identified for analysis. All patients had received alkylating or topoisomerase II inhibitor chemotherapy drugs for primary cancer treatment and three patients had received radiotherapy. A total of nine patients had been administered recombinant human granulocyte colony‑stimulating factor (G‑CSF). The median latency period for the nine patients with t‑AML was 25 months (range, 10‑240 months). The molecular cytogenetic abnormalities included t(15:17)(q22:q21), inv(16)(p13q22), del(5)(q22), CBFB/MYH11(+), FLT3(+), NARS(+), IDH(+), TET2(+), and TP53(+). Out of nine patients with t‑AML, eight received chemotherapy, two of whom underwent HSCT. The median survival time of the nine patients with t‑AML was 10 months and the 2‑year‑survival rate was 44.4%. Greater clarity around the diagnosis and treatment is required to improve the outcomes of patients with t‑AML.

The prevalence of therapy-related acute leukemia (t-AL) is increasing rapidly, primarily due to widespread use of cytotoxic therapy, including chemotherapy and/or radiation therapy for prior cancer that significantly prolonged survival of cancer patients (1). According to the available research results, most t-AL cases are of myeloid lineage, with distinct clinical and pathological features. Therapy-related myelodysplastic syndrome and therapy-related acute myeloid leukemia (t-AML) have secured a place in the World Health Organization (WHO) classification of hematopoietic neoplasms as separate entities (2), accounting for up to 10–20% of all AL cases (3). Compared with de novo AML, the prognosis of t-AML has always been poor, with a higher cytogenetic abnormal risk and shorter survival time (4–6). Long-term damage from previous cytotoxic drug treatments and primary immune disorders generally result in resistance to high-intensity chemotherapy drugs (7). Moreover, the poor prognosis observed in patients with t-AML is dependent of older age at presentation and comorbidities (8). These t-AML patients are generally insensitive to high-intensity chemotherapy agents due to long-term damage from prior cytotoxic drug therapy and the presence of immune disorders (4). As the current treatment of t-AML thus remains challenging, the aim of the present study was to investigate the clinicopathological features of nine cases of t-AML treated at our department between 2016 and 2020, and to provide a reference for the current clinical treatment of t-AML.

A total of 272 consecutive AML cases, which were treated at the Department of Hematology and Oncology of Zhongda Hospital (Jiangsu, China) between January 2016 and January 2020, were reviewed. The WHO criteria published in 2016 (2) were followed to diagnose AML, and a bone marrow (BM) biopsy was evaluated by a professional haemato-pathologist. The cases of t-AML were identified based on their exposure to chemotherapy and/or radiotherapy for primary cancer treatment, regardless of the latency period. Clinical data pertaining to the patients were obtained from their medical records.

BM aspirates were collected from all the patients with t-AML at the time of admission. Cytogenetic analysis was conducted using conventional G-banding technology and fluorescence in situ hybridization. Karyotypes were described according to the International System for Human Cytogenetic Nomenclature (9). A mutational analysis of the DNA extracted from each aspirate was performed using next-generation sequencing on 34 genes frequently mutated in AML (10).

The patients' baseline clinical data, postoperative chemotherapy and/or radiotherapy regimens, and outcomes of primary cancer were collected. The baseline clinical and molecular characteristics, the time between primary cancer and t-AML, outcomes and the intensity of therapy of the nine patients with t-AML were recorded. Response criteria of t-AML therapy, including complete remission (CR), CR with incomplete hematologic recovery, morphological leukemia-free state and partial remission (PR), were defined according to the 2017 European LeukemiaNet criteria (11) (the patients of the present study did not meet these criteria).

A total of nine patients with t-AML were identified, including three males and six females. The primary cancer types included breast cancer and gastrointestinal cancer. All the patients were engaged in general occupations and had no history of exposure to radioactive or toxic substances at the time of the analysis. The median age at diagnosis of primary cancer was 63 years (range, 41–81 years).

Surgical treatment was performed on all nine patients, and diagnosis of primary cancer was confirmed by postoperative pathological examination. The relevant data on the primary tumor status of the nine patients with t-AML are detailed in Table I.

Primary tumor status of the patients with t-AML (n=13).

The other 4 cases were gastrointestinal tumors. Excluding case number 5 for which the relevant data were not available due to their long latency period, the remaining 3 patients with gastrointestinal tumor received standard chemotherapy regimens including XELOX (oxaliplatin + capecitabine), and FOLFIRI (irinotecan + leucovorin + 5-fluorouracil) with no radiotherapy.

Treatment and prognosis of t-AML

t-AL is one of the long-term complications of patients with cancer receiving radiotherapy and/or chemotherapy/or immunosuppressive treatment (12,13). In general, t-AL is characterized by poor responsiveness to traditional therapies, rapid disease progression, and poor prognosis (14–17). Compared with the patients who do not receive chemotherapy, patients who receive high-dose chemotherapy have a significantly higher occurrence risk of t-AL (18,19). Among all t-AL cases, t-AML accounts for a high proportion, while (therapy-related acute lymphoblastic leukemia, t-ALL) is relatively rare. Furthermore, breast cancer t-AML is the most common subtype and accounts for up to 30% of all cases of t-AML (20).

Alkylating agent (such as cyclophosphamide and melphalan) and/or topoisomerase II inhibitor (such as doxorubicin, etoposide, pirarubicin, and other anthracyclines) application at high doses to achieve a certain accumulated drug dose in the body is the main cause of t-AML (21,22). In the present study, eight patients used the aforementioned types of chemotherapy drugs during their treatment.

Patients with t-AML have a relatively higher mutation frequency of IDH and TP53 (8,23). IDH gene mutation can change the epigenetics of cells, leading to histone hypermethylation, which may be an event that occurs early in t-AML (24,25). FLT3 gene mutation can also be observed in patients with t-AML, generally indicating a negative prognosis (6). In the present study, IDH, FLT3, and/or TP53 mutations were present in three cases of t-AML-M2. Of these three patients, two died of disease progression and severe infection, respectively.

Rashidi and Fisher (26) have suggested that topoisomerase II inhibitors and radiation were the most common causes of t-AML-M3. Chemotherapeutic drugs can interfere with DNA double-strands mainly by inhibiting topoisomerase II, promoting t(15;17)(q22;q21) and PML/RARa, thereby inducing t-AML-M3 occurrence (27). In the present study, the reciprocal translocation t(15;17)(q22;q21) was found in t-AML-M3 patients who previously underwent radiotherapy, and the typical therapy (ATRA + ATO) showed a positive result.

The inv16 inversion is the most common chromosomal abnormality in AML-M4, including patients with t-AML, and the CBFβ/MYH11 gene fusion can also be detected (8,28). These generally indicate a better prognosis according to a previous study (28).

It has been shown that abnormalities of chromosome 5 or 7 are associated with poor prognosis in patients with t-AML (29).

With the development of neoadjuvant therapy and the continuous extension of cancer survival, the incidence of t-AL has also increased significantly. Therefore, by ensuring appropriate treatment of the primary cancer, occurrence of such of therapy-related malignancies may be avoided. Furthermore, in the treatment of t-AML, fully evaluated and individualized treatment should be developed. Monoclonal antibodies, targeted therapies, and HSCT are promising treatments for t-AML (12,30). Since this study is a single-center study, the number of included cases is small and not highly representative. Existing results can only represent the situation of a small number of patients in limited areas to a certain extent. Multi-center cooperation is urgent to be carried out to expand the number of cases and involved region. With more research results and further analysis included, additional findings will further guide the clinical diagnosis and treatment to improve the outcomes of patients with t-AL.

The datasets used and/or analyzed during the present study are available from the corresponding author or reasonable request.

The patients and their families were informed that data from the case would be submitted for publication and gave consent for the academic use of clinical information. 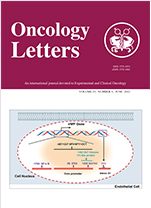