Expression of periostin according to endometrial cancer grade

Periostin (POSTN), a component of the extracellular matrix (ECM) produced by fibroblasts, interacts with integrin receptors and transmits signals to affect the cellular differentiation, adhesion and migration regulated by cytokines (10). The important role of POSTN in physiological processes has been demonstrated in a number of studies. For example, it has been shown that abnormal expression of POSTN is associated with the pathophysiology of asthma, myocardial damage and, most importantly, cancer (11–13). In cancer, POSTN interacts with integrin αvβ3 in endothelial cells and activates the focal adhesion kinase pathway, resulting in tumour angiogenesis through vascular endothelial growth factor (VEGF) regulating receptor-2 (VEGFR-2) (14).

Hiroi et al (15) first discovered that the expression of POSTN in the human endometrium varies according to the menstrual cycle, and is regulated by the oestrogen and progesterone released from the ovary. The present study aimed to investigate the protein and gene expression of POSTN and its utility as a biomarker in the determination of higher histological grade in endometrial cancer.

A total of 15 patients diagnosed with endometrial cancer and treated at the Department of Pathology Zeynep Kamil Training and Research Hospital (Istanbul, Turkey) and 15 patients who received surgery for non-tumour-related reasons between December 2019 and May 2020 were included in the present study. Three groups, International Federation of Gynaecology and Obstetrics grades I, II and III, were collected from the cases diagnosed with endometrial cancer via archive screening, with 5 patients in each group (16). All patients underwent a hysterectomy and bilateral salpingo-oophorectomy, as well as pelvic and/or paraaortic lymphadenectomy operations according to the pathology results obtained from frozen tissue samples. Tumour preparations of the cases from the pathology archive were re-evaluated, and endometrial cancer, non-tumour-related reason diagnosed blocks were selected for ELISA and PCR studies.

The control group consisted of patients who underwent a hysterectomy due to the indication of abnormal uterine bleeding; no cancer cells were detected in the endometrial sampling before the hysterectomy operation, and treatment-resistant bleeding continued.

Patients diagnosed with leiomyosarcoma, ovarian cancer and cervical cancer were excluded from the study.

Protein levels of POSTN as determined by ELISA

A total of four formalin-fixed, paraffin-embedded tissue sections (each 10- to 15-µm thick) were placed in a 1.5 ml centrifuge tube. Samples were incubated with 250 µl buffer (pH 7.5; 0.05 M Tris, 1 mM EDTA and 0.5% Tween 20). The tube was placed at 100°C for 10 min and immediately placed into a dry ice ethanol slurry until frozen. Protein extraction of all samples was performed as previously described (18). Protein concentrations were measured using the Bradford method (19). POSTN levels were measured with the sandwich ELISA method following the kit manufacturer's instructions (cat. no. EH0255; Wuhan Fine Biotech Co., Ltd.) with an inter-assay coefficients of variability (cv) of <12% and an intra-assay cv of <10%, respectively. The mean minimum detectable quantity of human POSTN was 0.094 ng/ml. POSTN values are presented as ng/µg protein. All ELISA measurements were performed using a microplate reader (BioTek Instruments, Inc.).

Histopathological evaluation was performed on the samples of each of the 30 subjects. One sample per tumor centimeter was taken from each tumor and the samples were embedded in paraffin blocks and cut into 5-µm-thick sections using a Leica RM2125 RTS microtome device (Leica Microsystems GmbH). The selected paraffin sections were stained with haematoxylin and eosin (H/E) at room temperature for morphological evaluation (Figs. 1 and 2). One sample from each endometrial tumor was selected according to the WHO classification of tumors, 5th edition (16). A single sample was placed in each paraffin block. Proliferative endometrium samples were taken from hysterectomy materials that were surgically resected for reasons other than endometrial pathologies. All slides were examined under a light microscope (Olympus BX51; Olympus Corporation).

SPSS version 18.0 (SPSS, Inc.) was used for the statistical analysis. Values are expressed as the mean ± standard deviation for age, and as the mean ± standard error for the POSTN gene expression and protein levels. One-way ANOVA was used to analyse the differences among multiple groups, and an unpaired Student's t-test was used to compare data between two groups. Post-hoc tests analyses were performed using Tukey's test to compare the groups after one-way ANOVA, as the variances were homogeneous. Spearman's correlation analysis was used to analyse the correlations between cancer grade and POSTN protein levels and gene expression. P<0.05 was considered to indicate a statistically significant difference.

The mean age was 55.6±9.0 years for the total patient cohort, with high similarity between the endometrial cancer and non-pathological control groups (58.8±8.8 vs. 52.4±8.3 years, respectively; P=0.05). H/E staining for endometrial cancer in Fig. 1; confluent glandular, cribriform pattern and intervening loss of stroma were observed. For proliferative endometrium (control) in Fig. 2; endometrial glands were observed to be uniform and widely spaced, and glandular epithelium consisted of low columnar cells.

Epithelial-mesenchymal transition (EMT) is known as an important stage in cancer invasion and metastasis, and POSTN is a demonstrated factor in cell migration and transformation via EMT during cell differentiation and pathological progression (20). It has been shown that the effect of POSTN on EMT is mediated by the PI3K/AKT signalling pathway, which is regulated by cytokines, such as TGF-β1 (21,22). While POSTN is a marker of EMT, it is also an inducer of EMT (23). Previous studies have indicated that POSTN is expressed in large quantities in the tumour microenvironment and is one of the factors that mediate the communication between tumour cells and the ECM (21–23). The present study showed an increase in the protein level and gene expression of POSTN in endometrial cancer, and to the best of our knowledge, it is the first study reporting on this subject.

The endometrium consists of stromal and epithelial cells with eutopic and ectopic localization. In a previous study on the intrauterine physiological endometrium, POSTN expression was reported to increase significantly in the mid-proliferative and early secretory phases, while downregulated expression was observed in the late-proliferative, mid-secretory and late-secretory phases (15). The data obtained showed a strong association between oestrogen and progesterone supplementation and POSTN expression (15). POSTN expression is controlled by ovarian steroid hormones, and this may have a strong effect on physiological pregnancy and pathological processes (15). In other studies, POSTN was found to be overexpressed in tumour metastases, similar to certain mesenchymal cell markers, such as fibronectin and cadherin (24,25). POSTN interacts with integrin receptors to regulate the adhesion, differentiation and migration of undifferentiated cells with their characteristic fasciclin 1 domains (26). Cancer-associated fibroblasts are known as a major ECM component in the tumour microenvironment, and POSTN is partially produced by fibroblasts in metastatic lesions (27,28). In a previous study, it was determined that active fibroblasts secrete POSTN and support the differentiation, adhesion and migration of cholangiocarcinoma cells (29). Moreover, increased expression of POSTN has been shown to affect the tumour microenvironment by remodelling the ECM and interacting with integrins or other signalling molecules (10). The present study measured the protein level and gene expression of POSTN with regard to all three grades of endometrial cancer, and found that endometrial cancer grade was significantly correlated with gene expression and protein level, showing an increase in POSTN level as the grade increased. The present data support the results of previous studies indicating increased POSTN expression in malignant tissues such as colon, esophageal, nasopharyngeal carcinoma and pancreatic cancer (21–24).

In a large study conducted on patients diagnosed with ovarian cancer, POSTN was associated with drug resistance in epithelial ovarian cancer and gene expression profiling revealed a correlation between POSTN expression and chemotherapy resistance (30). In a previous study showing increased resistance to chemotherapy in chemosensitive ovarian cells under the influence of recombinant POSTN (31), it was reported that the proliferation and spread of non-small cell lung cancer cells could be inhibited, while sensitivity to chemotherapy was increased (32). In conclusion, targeting POSTN represents a novel therapeutic strategy for minimizing chemoresistance. There have been attempts to demonstrate the efficacy of targeting POSTN in the detection and treatment of tumours in several preclinical models. One of them used near-infrared fluorescence imaging with upper gastrointestinal endoscopy to detect preneoplastic lesions via optical imaging of POSTN (33). Kyutoku et al (34) reported that treatment with PN1-Ab, an anti-POSTN antibody in breast cancer, was able to significantly inhibit the growth of primary tumours and the formation of lung metastases in an experimental study.

The present study has certain limitations. For example, patient serum samples were not assessed, as paraffin-embedded tissues were used. The aim of the study was to demonstrate the POSTN changes at the tissue level before proceeding with measuring changes in the serum in larger groups in future studies and the fact that the sample size was small was another limitation of the study.

The data obtained in the present study suggest that POSTN may be used as a biomarker in the early detection of endometrial cancer and determination of higher histological grade. Further comprehensive studies are required to fully elucidate the clinical value and prognostic impact of POSTN.

The authors would like to thank Professor Canan Kabaca (Zeynep Kamil Training and Research Hospital, Istanbul, Turkey) for sharing her experience and knowledge and for her contribution to this study by surgical techniques and literature review.

The present study was approved by the by the Ethics Committee of Zeynep Kamil Training and Research Hospital (Istanbul, Turkey; approval no. 116). All patients consented to treatment in accordance with institutional guidelines, and provided written informed consent at the time of the treatment. 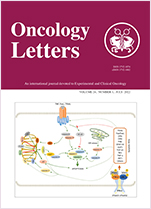