We reported previously that aldehyde dehydrogenase (ALDH)1A1, a potential marker of cancer stem cells (CSCs) (1,2), was related to tumorigenic potential in endometrioid carcinoma (EC) (3). CSCs refer to tumor cells that have the ability to self-renew and generate the diverse cells that comprise the tumor (4,5). Recent years, CSCs are reported to emerge from non-CSCs, called tumor cell plasticity (6,7), however, the mechanism has not been fully elucidated. In this study, we investigated the tumor cell plasticity from the viewpoint of ALDH1A1 activity.

GPM6B is a transmembrane protein that belongs to the proteolipid protein family. GPM6B is expressed in the central nervous system (8). GPM6B is related to the process of neuronal myelination, stabilizes the axonal membranes, and promotes neuronal differentiation (9–11). In the functional analysis of GPM6B in tumors, there is only a report that GPM6B has a cancer-suppressing effect in prostate cancer (12), and the function of GPM6B in EC is unknown.

The study was approved by the Ethical Review Board of the Graduate School of Medicine, Osaka University (approval no. 15234), and was performed in accordance with the committee guidelines and regulations. We examined 47 patients undergoing surgery for EC at Osaka University Hospital from 2011 to 2014. All patients provided written informed consent. The clinicopathological features of the enrolled patients were shown in Table I. Resected specimens were fixed in 10% formalin and processed for paraffin embedding. Specimens were stored at room temperature in a dark room, sectioned at 4 µm thickness, and subjected to immunohistochemical analysis.

For generation of HEC-1B subline cells, original cells were treated with threefold diluted plasma-activated medium (PAM) which was culture medium irradiated by non-thermal plasma device that containing of gas, electrons, ions, radicals, and ultraviolet light as previously described (14). PAM induced apoptosis in a large number of cells due to production of reactive oxygen species (ROS) such as H2O2. Therefore, we selected the single cell survived from ROS using microscope. After the selected cell was cultured in 96-well plate, cells proliferated in 6-well plate. The same procedure was repeated once more to prepare HEC-1B subline cells.

The plasmid Empty-GFP was transfected into HEC-1B and HEC108 cells using Lipofectamine 3000 reagent (Thermo Fisher Scientific). The plasmid GPM6B-GFP was transfected into HEC-1B (GPM6B-KO) and HEC108 cells. Green population was sorted with Cell Sorter SH800ZDP (SONY, Tokyo, Japan). When colonies formed after passage, we picked up different colonies and named OE1 and OE2. Untransfected HEC108 parent cells (WT) was used as a negative control. HEC1B and HEC-108 transfected with empty vector (EV) was used as another negative control.

Cells were rinsed three times with PBS and lysed in 500 µl of lysis buffer [1×SSC (418 µl), 1M Tris-HCl (pH 7.5) (5 µl), 0.5M EDTA (pH 8.0) (1 µl), 10% SDS (50 µl), 20 mg/ml Proteinase K (FUJIFILM) (25 µl), 10 mg/ml RNase A (Invitrogen) (1 µl)]. The samples were mixed by vortexing and centrifugation at 15,310 g for 10 min at room temperature. After centrifugation at high speed, the upper phase was carefully removed and transferred to a new tube. A mixture of Phenol: Chloroform: Isoamyl Alcohol (Nacalai) was added in equal volumes to samples and the samples were mixed gently and the aqueous layer was transferred into a new tube. After ethanol precipitation, precipitated DNA was dissolved in 30 µl of sterile 1×TE buffer (pH 8.0). Extracted genomic DNA was amplified with KOD FX Neo (TOYOBO). The following primers which include protospacer adjacent motif were used to amplify DNA:

The following primers were used to check the disrupted alleles:

Immunohistochemical staining was conducted by the Dako Autostainer Link 48 + (Dako/Agilent Technologies, Inc.) according to the manufacturer's instructions. Primary antibodies are incubated for 30 min at room temperature.

Studies were performed as previously reported (13). LAS-4000 Image Analyzer (GE Healthcare, Chicago, IL, USA) or ChemiDoc Touch (Bio-Rad) were used for the detection of antibody reaction. The expression of β-Actin was used as a loading control.

Statistical analyses were performed using JMP Pro 14 software (SAS Institute). In vitro experiments were performed at least two times. The data are presented as means ± standard error of the mean of independent experiments. The significance of the differences was determined using Mann Whitney U test. The log-rank test was used for survival analysis. Kaplan-Meier survival plots were made by using GraphPad Prism 9. P<0.05 was considered to indicate a statistically significant difference.

Confirmation of plasticity of cancer cells

To validate the tumor cell plasticity, we conducted Aldefluor assay using EC cell line HEC-1B. After culturing ALDH1A1-low cells, the cell distribution was analyzed by the assay. ALDH1A1-low population spontaneously yielded ALDH1A1-high population (Fig. 1A). Next, we stained ALDH1A1-low cells red using the PKH26 Red Fluorescent Cell Linker Kit and conducted Aldefluor assay. The percentage of cells that turned yellow in the total cell number was defined as Plasticity index (Fig. 1B). Furthermore, we found that the mixture of ALDH1A1-high population sometimes accelerated the plasticity index and observed changes in tumor cells with low ALDH1A1 activity under a fluorescence microscope (Fig. 1C and D). Many color changes were observed in the adhesive areas between tumor cells (Fig. 1D).

We speculated that physical contact between cells contributed to the activation of ALDH1A1. First, we generate some sublines of HEC-1B cells using PAM and co-cultured ALDH1A1-high cells and ALDH1A1-low cells by a method of culturing two types of cells in the same dish and a method of culturing the two types of cells so that they do not contact with each other via transwell (Permeable Supports 3.0 µm Polycarbonate membrane, Corning) (Fig. 2A). In subline A, the former method had a higher plasticity index than the latter method, however, there was no difference in subline B (Fig. 2B). And then, we extracted RNAs of subline A and B. We compared the RNA expression of both cells and focused on GPM6B as the candidate mediating tumor cell plasticity (Fig. 2C; Tables II and SI). Next, we performed immunohistochemistry analysis of ALDH1A1 and GPM6B in clinical samples of EC tissues and found that GPM6B tended to express in the border of ALDH1A1 expressing tumor cells and non-expressing tumor cells (Fig. 2D).

Top 20 genes upregulated in subline A.

Due to a limited number of enrolled cases in this study, we examined the effect of high GPM6B on prognosis with three kinds of publicly available datasets; gene expression profiling interactive analysis (GEPIA)2, human protein atlas, and the cancer genome atlas (TCGA). In GEPIA2 of uterine corpus endometrial carcinoma, high GPM6B expression was marginally correlated with poor overall survival of the patients (Fig. 4A), in which group cutoff was set as quartile (http://gepia2.cancer-pku.cn/#survival). The data of human protein atlas revealed high GPM6B expression was correlated with poor overall survival of endometrial carcinoma (https://www.proteinatlas.org/ENSG00000046653–GPM6B/pathology/endometrial+cancer), in which 432 cases of GPM6B-high and 109 cases of GPM6B-low were enrolled and the best expression cut-off score 1.94 was applied (Fig. 4B). The median follow-up time of human protein atlas was 2.5 years and the p-value was 0.037. Lastly, we examined TCGA database, in which the enrolled endometrial carcinoma cases were divided into recently published classification (15); POLE type (ultramutated) (POLE), microsatellite instability (MSI), copy number low (CN-low), and copy number high (CN-high). Sixteen cases of POLE, 65 cases of MSI, 87 cases of CN-low and 58 cases of CN-high were examined in TCGA database. When cutoff was set as quartile, patients with high GPM6B expression had significantly shorter OS compared with those with low GPM6B expression in CN-high group but not in other groups (Fig. 4C).

We identified a new function of GPM6B in EC cells. GPM6B contributed to the tumor cell plasticity in EC. We reported previously that a potential marker of CSCs; ALDH1A1 was related to tumorigenic potential in EC (3). The ALDH1A1-high cells are thought to be target for treatment. However, the tumor cell plasticity is reported to occur (6,7) and we should target the ALDH1A1-low cells which have a potential to become ALDH1A1-high cell.

GPM6B is less understood for cancer research and recently reported to work as a tumor suppressor in prostate cancer (12). To examine the significance of GPM6B in EC, we generated GPM6B-KO and GPM6B-expressing cells. We found that ALDH1A1 expression was regulated by GPM6B. Thus, we revealed another aspect of GPM6B for cancer. Notably, GPM6B was expressed in the border of ALDH1A1 expressing tumor cells and non-expressing tumor cells in clinical samples of EC. That is, GPM6B is not expressed in ALDH1A1 high expression area. GPM6B might be necessary for only increasing ALDH1A1. Further investigation is needed to uncover the mechanism.

In summary, direct cell-cell contact between tumor cells influenced on the tumor cell plasticity. GPM6B regulated ALDH1A1 expression. Furthermore, GPM6B was also a prognostic factor. These results suggest that GPM6B mediated the induction of ALDH1A1 and we have to consider tumor cell plasticity to cure EC.

The datasets used and/or analyzed during this study are available acquired with the permission of the corresponding author. The sequencing datasets generated and/or analyzed during the current study are available in the Gene Expression Omnibus repository under accession number GSE212889 (https://www.ncbi.nlm.nih.gov/geo/query/acc.cgi?acc=GSE212889).

SK, JII and EM were involved with conception and design. SK, JII, DO and EM analyzed and interpretated the data. SK, JII, EMF, MK, ST, TM, SN and EM performed experiments and analyzed data. SK, JII and EM wrote the manuscript. SK and EM confirm the authenticity of all the raw data. All authors read and approved the final manuscript, and are accountable for all aspects of the work.

The study was approved by the Ethical Review Board of the Graduate School of Medicine, Osaka University (grant no. 15234), and was performed in accordance with the committee guidelines and regulations. All patients provided written informed consent to participate in the study.

Patient consent for publication was covered by the informed consent document. 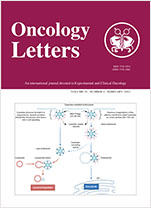