For cases of inoperable bile duct carcinoma, we perform intraluminal irradiation using an 192iridium wire following endoprostheses implantation. However, the effectiveness of this procedure is uncertain, and may lead to decreased patient quality of life in some cases. Therefore, we obtained samples of bile duct carcinoma either by percutaneous transhepatic cholangioscope (PTCS) or by surgery, and studied whether expression levels of Ki-67 and p53 in these tissues could predict the effectiveness of radiotherapy (RT). Immunohistochemistry was used to determine the expression of p53 and Ki-67 in 40 resected and 18 biopsy specimens. All biopsy specimens were stage IVA according to UICC classification. Labeling indices were calculated as percentage of positively stained tumor cell nuclei of total tumor cells counted. Samples were divided into two groups according to labeling index (LI). In the resected specimens, Ki-67 LI was significantly higher in cases positive for lymphatic invasion than in negative cases (p<0.05), or advanced-stage cases (p<0.05). Also, mean Ki-67 LI was higher in tumors from cases with lymph node metastasis than without. In the biopsy specimens, a significant correlation between Ki-67 LI and the term of stent patency (p<0.05) was observed. However, there were no significant correlations between clinicopathological factors or stent patency and p53 immunoreactivity. Assessment of mean Ki-67 antigen expression, as measured by MIB-1 staining, in samples of hilar bile duct carcinoma appeared to be an important indicator of clinical behavior. Biopsy specimens obtained by PTCS may be very useful in predicting the effectiveness of RT and assist in the selection of appropriate therapies. 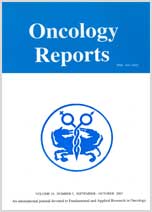