We established a new cell line (ACCNS) from human adenoid cystic carcinoma (AdCC) of the maxilla, using tissue culture techniques and it has been successfully subcultured for more than 100 passages during 2 years. The population doubling time was approximately 39.2 h on a plastic dish. In type I collagen gel culture, the cells formed spherical colonies by day 7 after seeding. The colonies showed tubular and solid structures, and eosinophilic material stained with mucicarmine was revealed in the inner space. Immunohistochemically, ACCNS cells demonstrated expressions of keratin, α-smooth muscle actin, vimentin and S-100 protein, similar to those of original AdCC. These findings indicate that ACCNS cells possess the characteristics of AdCC. In addition, inoculation of 4.0x106 cells into nude mice developed tumors that were histologically confirmed as undifferentiated carcinoma. Therefore, ACCNS is the first AdCC cell line with tumorigenicity in nude mice. Based on these results, ACCNS provides a useful culture model of AdCC to analyze the biological characteristics and behavior of this tumor. 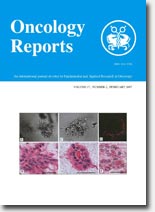