Patients with sporadic microsatellite instable colorectal cancers, in most of which the function of the hMLH1 mismatch repair gene is impaired, do not gain a survival benefit from 5-fluorouracil (5-FU)-based chemotherapy. However, the effect of hMLH1 on the cytotoxicity induced by 5-FU has not yet been sufficiently confirmed. In this study, we assessed the effect of hMLH1 on cytotoxicity and apoptosis induced by 5-FU using newly developed cell lines. We constructed two cell lines: SW480 (originally hMLH1-proficient), in which the expression of hMLH1 was reduced using a small interfering RNA (siRNA) technique, and HCT116 (originally hMLH1-deficient), in which the expression of hMLH1 can be regulated by doxycycline. Using these cell lines, a clonogenic survival assay, 4',6-diamidino-2-phenylindole (DAPI) staining and an Annexin-V assay were performed. Moreover, the incorporation of 5-FU into DNA was determined using tritium-labeled 5-FU. In both of our two cell lines, hMLH1-deficient cells exhibited approximately 2.4-fold clonal surviving fraction compared to hMLH1-proficient cells for 10 days after the administration of 5-FU. Additionally, hMLH1-deficient cells treated with 5-FU exhibited 34-45% less apoptosis than hMLH1-proficient cells according to the results of DAPI staining and Annexin-V assay. Furthermore, hMLH1-deficient cells treated with 5-FU exhibited an approximately 2-fold greater incorporation of 5-FU into DNA than control cells, suggesting that the recognition of 5-FU-incorporated DNA is impaired in hMLH1-deficient cells, resulting in reduced apoptosis. Our conclusions were that decreased expression of hMLH1 in colon cancer cells reduced the apoptosis induced by 5-FU, suggesting that hMLH1 is a key determinant of 5-FU chemosensitivity. 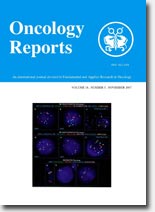