Chemoresistance to cisplatin is a major limitation of cisplatin-based chemotherapy in the clinic. The combin­ation of cisplatin with other agents has been recognized as a promising strategy to overcome cisplatin resistance. Previous studies have shown that wogonin (5,7-dihydroxy-8-methoxyflavone), a flavonoid isolated from the root of the medicinal herb Scutellaria baicalensis Georgi, sensitizes cancer cells to chemotheraputics such as etoposide, adriamycin, tumor necrosis factor-related apoptosis-inducing ligand (TRAIL) and TNF. However, the effect of wogonin on cisplatin-induced cytotoxicity has not been previously reported. In this study, the non-small cell lung cancer cell line A549 and the cervical cancer cell line HeLa were treated with wogonin or cisplatin individually or in combination. It was found for the first time that wogonin is able to sensitize cisplatin-induced apoptosis in both A549 cells and HeLa cells as indicated by the potentiation of activation of caspase-3, and cleavage of the caspase-3 substrate PARP in wogonin and cisplatin co-treated cells. Importantly, wogonin robustly induced H2O2 accumulation in these cells, which substantially contributes to the sensitization of cisplatin cytotoxicity by wogonin, as two reactive oxygen species scavengers, butylated hydroxyanisole (BHA) and N-acetyl-L-cysteine (NAC), significantly suppressed the potentiated cytotoxicity caused by wogonin and cisplatin co-treatment. The results from this study provide important new evidence supporting the potential use of wogonin as a cisplatin sensitizer for cancer therapy.

Cisplatin (cis-diamminedichloroplatinum, DDP) is one of the most potent and widely used chemotherapeutic agents for treatment of a wide variety of solid tumors in clinic. By interacting with DNA to form intra- and inter-strand adducts to disrupt DNA replication and transcription, cisplatin activates several cellular signal pathways including those involving ATR, p53, p73 and MAPK, which results in apoptosis (1). However, cisplatin-induced apoptotic cell death can be attenuated, and chemoresistance to cisplatin is a major limitation of cisplatin-based chemotherapy. The molecular mechanisms responsible for cisplatin resistance appear to be multifactorial. Reduced drug uptake, increased drug inactivation and increased DNA repair would limit the extent of cisplatin-induced DNA damage. Moreover, mechanisms that inhibit propagation of the DNA damage signal to the apoptotic machinery have also been proposed, which include loss of damage recognition, loss of p53 function, overexpression of HER-2/neu, activation of the PI3-K/Akt pathway, overexpression of antiapoptotic Bcl-2, and defects in apoptotic pathways (2,3). Therefore, combination of cisplatin with other agents that could modulate DNA damage and related signal pathways is a promising strategy to overcome cisplatin resistance.

Because they are generally safe to humans, naturally occurring compounds from diets or medicinal plants are good candidates for increasing the cisplatin anticancer activity. Wogonin (5,7-dihydroxy-8-methoxyflavone) is a flavonoid isolated from the root of the medicinal herb Scutellaria baicalensis Georgi, which has been shown to exert antioxidant, anti-inflammatory, antiviral and anticancer activities in vitro as well as in vivo(4–7). Importantly, wogonin showed no significant toxicity to normal peripheral blood T cells (8), and was able to reduce etoposide-induced apoptotic cell death in normal cells such as bone marrow cells and thymocytes (9). Therefore, wogonin is a good potential sensitizer for cisplatin anticancer activity. Wogonin was found to potentiate etoposide-induced apoptosis in cancer cells through inhibition of P-glycoprotein (10), to overcome IL-6-induced adriamycin resistance through suppressing IL-6-mediated aldo-keto reductase (AKR) superfamily member dihydrodiol dehydrogenases (AKR1C1/1C2) overexpression in human non-small lung cancer cells (11), and to enhance the cytotoxicity of tumor necrosis factor-related apoptosis-inducing ligand (TRAIL) through upregulating p53 and PUMA (12). Recently, we found that wogonin sensitizes cancer cells to tumor necrosis factor α (TNF-α)-induced apoptosis by blocking TNF-induced NF-κB activation (13). However, the effect of wogonin on the anticancer activity of cisplatin, one of the most widely used chemotherapeutics in clinic, has not been investigated. In this study, we treated the non-small cell lung cancer cell line A549 and the cervical cancer cell line HeLa with the combination of wogonin and cisplatin and found for the first time that wogonin potently sensitizes cisplatin-induced cancer cell apoptosis through triggering intracellular reactive oxygen species (ROS) accumulation, which added important new evidence supporting the potential use of wogonin as adjuvant of cisplatin.

A549 (a non-small cell lung cancer cell line) and HeLa (a cervical cancer cell line) were from American Type Culture Collection (ATCC, Manassas, VA) and grown in RPMI-1640 supplemented with 10% fetal bovine serum (Hyclone, Logan, UT), 100 U/ml penicillin and 100 μg/ml streptomycin. The cultured cells were kept in a 37°C humidified incubator with 5% CO2. For cell death assay, cells were seeded in 96-well plate and after overnight culture were then treated as indicated in each figure legend. Cell death was assessed based on the release of lactate dehydrogenase (LDH) using a cytotoxicity detection kit from Promega (Madison, WI) as described previously (14). All the experiments were repeated 3–5 times and the average is shown in each figure.

Apoptosis was detected by flow cytometric analysis using an Annexin V-FITC Apoptosis Detection kit (Nanjing KeyGen Biotech, Nanjing, China). Cells were treated as indicated in the figure legend, and then were double stained with Annexin V-FITC and propidium iodide (PI) following manufacturer’s instruction. The stained cells were analyzed by flow cytometry (Beckman Coulter, Inc., Brea, CA). Cells that are in early apoptosis are Annexin V-FITC positive and PI negative; and cells that are in late apoptosis or already dead are both FITC Annexin V and PI positive.

Cells were seeded in 12-well plates and after overnight culture were then treated as indicated in each figure legend. Thirty minutes before collecting cells, H2O2-sensitive fluorescent dye CM-H2DCFDA (5 μM) or superoxide-sensitive dye DHE (5 μM) was added. ROS were detected by flow cytometry (Beckman Coulter, Inc.) as reported previously (15).

We next investigated whether wogonin potentiates cisplatin-induced cell death through enhancing apoptosis. HeLa cells were treated with wogonin, cisplatin alone or both. The cells were stained with Annexin V-FITC and PI, apoptosis was analyzed by flow cytometry. As shown in Fig. 2A, both early apoptotic (Annexin V-FITC positive and PI negative, 3.5%) and late apoptotic (both Annexin V-FITC and PI positive, 10.3%) cell population were significantly increased in wogonin and cisplatin co-treated cells compared to the samples individually treated with cisplatin (3.1% and 4.7%) or wogonin (1.9% and 1.5%), indicating that the enhanced cell death is mainly through apoptosis. The activation of caspases was also detected by western blotting. Whereas the activation of caspase cascade was barely detected in wogonin or cisplatin alone treated cells, the activation of caspase-3 and cleavage of the caspase-3 substrate PARP were significantly enhanced in cisplatin and wogonin co-treated A549 cells and HeLa cells (Fig. 2B). The pan-caspase inhibitor Z-VAD-FMK effectively suppressed the synergistic cytotoxicity induced by wogonin and cisplatin co-treatment (Fig. 3), further confirming that the sensitization to cisplatin by wogonin is through enhancement of apoptosis in cancer cells.

It has been well established that ROS, a group of reactive oxygen-containing species including superoxide, hydrogen peroxide (H2O2) and hydroxyl radical, are important signaling mediators for cell death pathways. Our previous work has demonstrated that wogonin induces intracellular accumulation of H2O2 in cancer cells, which contributes substantially to the synergistic cytotoxicity induced by wogonin plus TNF (13). The role of ROS in wogonin plus cisplatin-induced synergistic cytotoxicity was thus investigated. Cells were treated with wogonin, cisplatin or both, stained with two ROS-specific dyes, CM-H2DCFDA that is specific for hydrogen peroxide (H2O2) or DHE that is specific for superoxide, and then analyzed by flow cytometry. As expected, wogonin induced strong intracellular H2O2 accumulation in both A549 cells and HeLa cells, as indicated by significant rightward shift of the peaks of wogonin treated cells compared with that of the control cells (Fig. 4A). The treatment with wogonin plus cisplatin showed similar trend and even more striking extent of H2O2 induction as treated by the wogonin alone. On the contrary, wogonin and cisplatin had marginal effect on cellular superoxide level in A549 and HeLa cells (Fig. 4B), which is consistent with our previous results (13). Then, we treated cells with ROS scavengers BHA or NAC to remove H2O2. As shown in Fig. 5A, these two scavengers effectively suppressed the synergistic cytotoxicity induced by wogonin and cisplatin co-treatment in both HeLa and A549 cells, which is well-correlated to significant reduction of H2O2 levels in the cells (Fig. 5B). Taken together, these results strongly suggest that wogonin-induced H2O2 accumulation substantially contributes to the potentiated cytotoxicity caused by cisplatin and wogonin co-treatment.

In the current study, we demonstrate for the first time that wogonin is able to sensitize cisplatin-induced apoptosis through a ROS-dependent mechanism in the non-small cell lung cancer cell line A549 and the cervical cancer cell line HeLa. First, combination treatment of these two cell lines with wogonin and cisplatin showed synergistic cytotoxicity in a dose-dependent manner. Second, apoptosis was significantly enhanced in wogonin and cisplatin co-treated cancer cells, which was indicated by the potentiation of activation of caspase-3 and cleavage of the caspase-3 substrate PARP in co-treated cells. Third, wogonin robustly induced H2O2 accumulation in both A549 and HeLa cells and two reactive oxygen species scavengers BHA and NAC significantly suppressed the synergistic cytotoxicity caused by wogonin and cisplatin co-treatment, indicating H2O2 induced by wogonin substantially contributes to the synergistic cytotoxicity.

Flavonoids are a group of naturally occurring polyphenolic compounds found ubiquitously in plants and abundantly present in human diets. Humans ingest significant quantities of flavonoids in their diet because of their widespread distribution. Scutellaria baicalensis Georgi was widely used as an anti-inflammatory herbal remedy in traditional Chinese and Japanese medicine. In this study, we tested the major flavonoids (wogonin) in Scutellaria baicalensis Georgi and found that it sensitized cisplatin-induced apoptosis through an H2O2-dependent mechanism. Although flavonoids are most commonly known for their antioxidant activity, previous studies from our group and several other groups have demonstrated that wogonin robustly induced intracellular H2O2 accumulation in cancer cells, which contributed to the wogonin anticancer activity (8,12,13,16). We also found that wogonin induced H2O2 through suppression of catalase activity in cancer cells (13). Interestingly, wogonin induces marginal H2O2 accumulation in normal peripheral T cells and immortalized normal bronchial epithelial cells, which may explain the selective cytotoxicity of wogonin on malignant cells. Indeed, the pro-oxidant activity of other flavonoids such as quercetin and luteolin has also been shown by increasing number of reports (15,17,18). It is believed that antioxidant and pro-oxidants behavior of flavonoids may depend on the structure of flavonoids, the source of the free radicals, and the context and microenvironment of the cell such as the presence and concentration of Fe and Cu ions (19,20).

The pharmacological mechanisms of cisplatin and etoposide are apparently different. Etoposide prevents re-ligation of the DNA strands by forming a ternary complex with DNA and the topoisomerase II enzyme, thus to cause errors in DNA synthesis and promote apoptosis of cancer cells (21). Cisplatin disrupts DNA function and induces apoptosis by interacting with DNA to form DNA adducts. It is noteworthy that wogonin is able to sensitize cancer cells to apoptosis induced by both etoposide and cisplatin, two widely used frontline chemotherapeutics. Previously, the sensitizing effect of wogonin on etoposide-induced apoptosis in cancer cells was reported to involve inhibition of P-glycoprotein (10). Whereas the results from this study strongly suggest that intracellular H2O2 accumulation contributes substantially to the enhanced apoptosis observed in wogonin and cisplatin co-treated cancer cells, although other mechanisms are not excluded. ROS are important modulator of cellular signaling and can cause DNA-damage directly. The underlying molecular mechanisms by which wogonin-induced H2O2 sensitized cisplatin-induced apoptosis are likely multifactorial and worthy further study. One possible mechanism may involve H2O2 mediated-downregulation of Bcl-2 protein through dephosphorylation and ubiquitination of the protein, which facilitates its degradation by proteasome (22,23). It is also possible that H2O2 oxidizes important cellular components such as DNA to trigger DNA damage-mediated apoptosis (24). Nevertheless, our results clearly suggest that wogonin could be used as a cisplatin sensitizer for cancer therapy.

This study was supported in part by grant 81172111 from National Natural Science Foundation of China, and also partly supported by grant 2010JQ0012 from the Young Scientist Fund of Science and Technology Department of Sichuan Province, China. 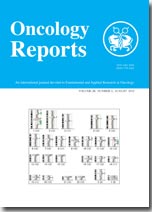