D-limonene is recognized as a potential chemotherapeutic agent, however, the details of this mechanism remain unclear. In this study, we investigated the effects of d-limonene on colon cancer cell viability and its potential mechanism of action in vitro. After 48 h of treatment, d-limonene suppressed the viability of LS174T cells in a dose-dependent manner and caused a dose-dependent apoptotic cell death. D-limonene activated caspase-3 and -9 and PARP cleavage in a dose-dependent manner. Moreover, an increase in Bax protein and cytosol cytochrome c from mitochondria and a decrease in bcl-2 protein were observed following treatment with d-limonene. In addition, d-limonene decreased the levels of p-Akt (Ser473), p-Akt (Thr308) and p-GSK-3β (Ser9), suggesting that d-limonene induced apoptosis via the mitochondrial death pathway and the suppression of the PI3K/Akt pathway.

D-limonene (1-methyl-4-isopropyl-cyclohexene) is a cyclic monoterpene and a major constituent in essential oils of orange, lemon, mandarin, lime, grapefruit and several other plants. It is listed in the Code of Federal Regulations as generally recognized as safe (GRAS) for a flavoring agent and can be found in common food items such as fruit juices, soft drinks, baked goods, ice cream and pudding (1). One epidemiological study suggested that citrus peel consumption, the major source of dietary D-limonene, might have a potential preventive effect on squamous cell carcinoma (2). In chemically-induced rodent tumor models, D-limonene has been reported to have chemopreventive activity at both the initiation and promotion/progression phases (3–8). Evidence from a phase I clinical trial showed that D-limonene is well tolerated and may have clinical activity in cancer patients (9). While these observations are of interest, a better understanding of the underlying action mechanisms of D-limonene is necessary to confirm its effectiveness as a potential chemopreventive and treatment agent.

Several mechanisms may account for the anticancer effect of D-limonene. The chemopreventive activity of D-limonene during the initiation phase of carcinogenesis might be attributed to the induction of phase I and phase II carcinogen-detoxifying enzymes, which are known to be responsible for detoxification of carcinogen (10–12). A previous report indicated that the topical treatment of D-limonene inhibits the Ras-ERK signaling pathway, inflammation and oxidative stress as well as the induction of pro-apoptotic state in the TPA-mediated promotion of DMBA-induced skin cancer in a mouse model (13). In vivo and in vitro studies demonstrated that the chemotherapeutic activity of D-limonene might be attributed to the induction of apoptosis (14–16). Ji et al found that the limonene-induced apoptotic death of human leukemia cells involves the increase in Bax protein expression, the release of cytochrome c from mitochondria and the activation of caspase, suggesting that the mitochondria-mediated intrinsic death pathway may play a major role in limonene-induced death (16).

The serine/threonine protein kinase (Akt, a member of the PI3K pathway) is involved in widely divergent cellular processes including apoptosis and cell proliferation (17). The aberrant activation of phosphoinositide 3-kinase (PI3K)/AKT has been documented as a frequent occurrence in human cancer, including colorectal cancer (18–20). Furthermore, abnormal activation of the PI3K/AKT pathway rendered these cells less sensitive to apoptosis stimuli (21,22) and inhibition of this pathway should provide a therapeutic approach for cancer (23). Once activated, however, Akt promotes the cell survival partially by phosphorylation and inactivation of several pro-apoptotic proteins, including GSK-3 (24), BAD (25) and caspase-9 (26). Although it has been reported that geraniol, an acyclic dietary monoterpene, potently induced apoptosis and autophagy by inhibition of AKT signaling (27), the effect of D-limonene on Akt signaling remains unclear.

One phase I study conducted by Vigushin et al indicated that three individuals with colorectal carcinoma, while on D-limonene at dose of 0.5–1 g/m2 per day, were able to suspend progression of the disease for over six months (9). This clinical trial strongly suggested that D-limonene could be an efficient therapeutic agent for colorectal cancer. The mechanism by which D-limonene inhibits the viability of colorectal cancer cells has yet to be established, therefore, we addressed this in the present study.

The LS174T human colon cancer cell line (Heilongjiang Cancer Institute, China) was maintained in RPMI-1640 medium at 37°C in a 5% CO2 atmosphere. All cell samples used were in the logarithmic growth phase.

Effect of D-limonene on the viability of LS174T cells was performed using 3-(4,5-dimethylthiazol-2-yl)-2,5-diphenyltetrazolium bromide (MTT) conversion assay. Briefly, LS174T cells were plated into a 24-well plate and cultured in the presence of varying concentrations of D-limonene for 48 h. Thereafter, 10 μl of MTT (5 mg/ml) was added to each well and the cells were incubated at 37°C for another 4 h. Following removal of the medium, the cells were lysed in 100 μl of dimethylsulfoxide (DMSO). Then, the optical density (OD) was measured at 490 nm by a microplate reader (Bio-Rad Laboratories, Hercules, CA, USA). The following formula was used: relative percentage of cell viability = (OD of the experimental sample/OD of the control group) × 100%.

Apoptosis was determined by staining cells with Annexin V- FITC staining. Briefly, after various treatments, both floating and trypsinized adherent LS174T cells were collected. Then the cell pellets were incubated with 5 μl propidium iodide (PI), 10 μl Annexin V-FITC for 20 min in the dark at room temperature and the samples were analyzed by flow cytometry.

Cytosolic extracts were prepared for cytochrome c according to the instructions for the Nuclear and Cytoplasmic Protein Extraction kit (active motif 40010). Total cell extracts were prepared by resuspending cells in cold lysis buffer (Beyotime, Jiangsu, China). The supernatants were then collected by centrifugation at 12,000 × g for 5 min. Equal amounts of lysate were loaded on a 10% SDS-polyacrylamide gel. After electrophoresis, proteins were transferred to a PVDF membrane and the blots were probed by corresponding primary antibodies, followed by incubation with HRP-conjugated secondary antibodies. The positive bands representing protein were visualized by chemiluminescent reagents (EZ-ECL; Biological Industries, Kibbutz Beit Haemek, Israel).

Data are expressed as the means ± SD of 3 repeated experiments. The one way analysis of variance (ANOVA) was used for statistical analyses. P<0.05 was considered to indicate statistically significant differences. All experiments were performed at least 3 times independently.

To investigate the effect of D-limonene on the viability of colon cancer cells, LS174T cells were treated with various concentrations of D-limonene for 48 h. The results of the MTT assay (Fig. 1) demonstrated that D-limonene significantly inhibited cell viability in a dose-dependent manner.

To investigate whether or not the observed apoptosis was due to caspase activation, the cell extracts were obtained after treatments and processed for western blot analysis. The changes in protein levels in the LS174T cells treated with D-limonene were determined using western blot analysis. After 48 h, D-limonene treatment resulted in partial cleavage of pro-caspase-3, and -9, whereas it had no significant effect on caspase-8 expression (Fig. 3), which indicated that D-limonene could increase the cleavage maturation of caspase-3 and caspase-9. Meanwhile, the cleavage of PARP, an executioner caspase substrate, was also detected using western blot analysis. Similarly, D-limonene treatment resulted in cleavage of PARP from 116 to 89 kDa (Fig. 3). Therefore, these results suggest that D-limonene-induced apoptosis is partly mediated through the mitochondrial pathway.

D-limonene regulates the expression of Bcl-2 and Bax protein

To confirm the involvement of the mitochondrial pathway of apoptosis, the expression of Bax and Bcl-2 in the LS174T cells treated with D-limonene were determined using western blot analysis. D-limonene treatment resulted in an upregulation of Bax and a slight downregulation of Bcl-2 (Fig. 4), which resulted in an increase in the ratio of Bax to Bcl-2, therefore favored apoptosis. Since the release of cytochrome c from the mitochondria triggers the activation of pro-caspase 9, we measured cytosol cytochrome c. D-limonene significantly increased the level of cytosol cytochrome c (Fig. 4), which further suggested that D-limonene-induced apoptosis is partly mediated through the mitochondrial pathway.

Akt is reported to promote cell survival by inhibiting apoptosis and its activation correlates with phosphorylation at Thr308 and Ser473 residues, so the effects of D-limonene on the amount and phosphorylation of Akt were evaluated using western blot analysis. D-limonene did not significantly alter the protein level of Akt, but it decreased the levels of phospho-Akt (Ser473) and phospho-Akt (Thr308) (Fig. 5), which suggested that inactivation of Akt kinase following D-limonene treatment was due to dephosphorylation of Akt, rather than reduction in total Akt protein. We detected the levels of phospho-GSK3β (ser9), which are phosphorylated and inactivated by Akt. Similarly, D-limonene significantly decreased the level of phospho-GSK3β (ser9) (Fig. 5). These results suggested that D-limonene treatment could decrease the activity of Akt.

Apoptosis (programmed cell death), is known to be involved in a variety of biological events. Accumulating evidence suggests that most anticancer agents can trigger apoptosis in tumor cells in vivo and in vitro, which appears to be associated with their effectiveness in prevention of tumor growth (31–33). It is well known that caspases play the central role in apoptosis. Caspase-8 and caspase-9 are the initiator caspases: caspase-8 is usually involved in the extrinsic death receptor apoptosis pathway, whereas caspase-9 has been linked to the intrinsic mitochondrial death pathway. They cleave and activate the downstream effector caspases, such as caspase-3, which cause PARP cleavage and eventually lead to apoptosis. Previous reports indicated that D-limonene may induce cellular apoptosis in some types of cancer (14,16,30). Moreover, in human leukemia cell lines, the caspase-dependent mitochondrial death pathway mediated the D-limonene-induced apoptosis (16). In this study, we showed that caspase activation is also involved in the D-limonene-induced apoptosis. Cleaved caspase-9, caspase-3, and PARP were activated by D-limonene in LS174T cells, but caspase-8 appears not to be involved. Therefore, these results suggest that apoptosis induction by D-limonene might have occurred through a mitochondria-mediated pathway.

It is well known that mitochondria play a key role in apoptotic signal transduction in mammalian cells (34). Bcl-2 and Bax are members of the Bcl-2 family that regulates apoptosis by control mitochondria integrity. Although they have highly similar amino acid sequences, their functions are opposed: Bcl-2 acts to inhibit apoptosis, whereas Bax counteracts this effect by heterodimerization with Bcl-2. The ratio of Bcl/Bax dictates the sensitivity of cells to a wide variety of apoptotic stimuli (35). In mitochondrion-dependent apoptosis, the disruption of the mitochondrion leads to the release of cytochrome c into the cytosol. The apoptosome containing cytochrome c, Apaf-1 and pro-caspase-9 is then assembled, which results in proteolytic processing and activation of pro-caspase-9. Active caspase-9 in turn activates pro-caspase-3 initiating a caspase signaling cascade to induce apoptosis (36). In the present study, we found that D-limonene decreased the protein level of Bcl-2, but increased the protein level of Bax, which is consistent with previous reports (16,28). We also noted a significant increase of cytochrome c in the cytosol of D-limonene-treated cells. Thus, these results further suggest that D-limonene has the ability to induce the intrinsic mitochondrial apoptosis signaling pathway in LS174T colon cancer cells.

The PI3K/Akt pathway is an important intracellular signaling pathway, which plays a critical role in controlling survival and apoptosis. In many types of cancer this pathway is overactive, supporting cell survival and proliferation (18–20). Several reports have shown that some anticancer agents induce apoptosis, in part, by blocking this pathway (37,38). Activated Akt phosphorylates and inactivates several pro-apoptotic proteins, including BAD (25), and caspase-9 (26), inhibiting the intrinsic apoptotic pathway. Recently, geraniol, an acyclic dietary monoterpene, was reported to induce apoptosis by inhibition of AKT signaling (27). Our results showed that D-limonene decreased not only phosphorylated Akt protein levels but also Akt activity. Moreover, we also found that caspase-9, a downstream target of Akt, was cleaved to the active form by the D-limonene treatment. Collectively, these results suggest that inhibition of the Akt pathway contributed, at least in part, to the apoptotic cell death caused by the D-limonene treatment.

In conclusion, the results from the present study suggest that D-limonene inhibited the Akt activation and activated the intrinsic mitochondrial apoptosis signaling pathway in LS174T cells. Although further studies are required to determine whether or not these pathways are involved in the anticancer effect of D-limonene on other cancer cell lines, we believe that this study may provide mechanistic insights into understanding the molecular basis of the anticancer effect of D-limonene. 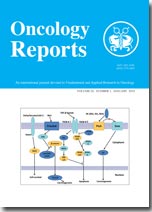