Cancer metastasis is a highly coordinated and dynamic multistep process in which cancer cells interact with a variety of host cells. Morphological studies have documented the association of circulating tumor cells with host platelets, where a surface coating of platelets protects tumor cells from mechanical trauma and the immune system. Cantharidin is an active constituent of mylabris, a traditional Chinese medicine. Cantharidin and norcantharidin are potent protein phosphatase 2A (PP2A) inhibitors that exhibit in vitro and in vivo antitumor activity against several types of cancer, including breast cancer. We investigated whether cantharidin and norcantharidin could repress the ability of MCF-7 breast cancer cells to adhere to platelets. Using MTT, clone formation, apoptosis, adhesion and wound-healing assays, we found that cantharidin and norcantharidin induced apoptosis and repressed MCF-7 cell growth, adhesion and migration. Moreover, we developed a flow cytometry-based analysis of tumor cell adhesion to platelets. We proved that cantharidin and norcantharidin repressed MCF-7 cell adhesion to platelets through downregulation of α2 integrin, an adhesion molecule present on the surface of cancer cells. The repression of α2 integrin expression was found to be executed through the protein kinase C pathway, the activation of which could have been due to PP2A inhibition.

Breast cancer is the most frequent cause of mortality in women in the developed world. Although early detection, precise resection using wide margins, and systematic adjuvant therapy have improved survival, distant metastasis remains the leading cause of breast cancer-related mortality (1). Circulating tumor cells (CTCs) are isolated tumor cells that disseminate from the sites of metastatic and/or primary cancer, including breast cancer. We have proved that CTCs can be identified and measured in the peripheral blood (1). The rate of detection and number of CTCs correlate with the disease stage in breast cancer patients. Moreover, the assessment of CTCs in metastatic breast cancer patients could predict the efficacy of chemotherapy (1). It is generally accepted that tumor cells are damaged by the immune system and physical factors (i.e., shear force and mechanical trauma due to passage through the microvasculature) during circulatory transport. However, when covered with platelets, cancer cells can overcome these stresses in the blood stream. The involvement of platelets in hematogenous metastasis has long been recognized. Recent studies have shown that the risk of cancer diagnosis is elevated after primary deep vein thrombosis or pulmonary embolism (2). Thus, therapies targeting the interaction between cancer cells and platelets could be a promising strategy to prevent cancer metastasis.

In previous studies, cantharidin and its derivatives exhibited strong in vitro and in vivo antitumor activity against the cells of various types of cancer (3–5), including breast cancer (6). In our previous studies, we found that cantharidin repressed cancer cell growth through cell cycle arrest and the induction of apoptosis (7–9). In the present study, we investigated the effect of cantharidin and norcantharidin on the ability of metastatic human breast cancer MCF-7 cells to adhere to platelets. The mechanism involved was also investigated.

Cellular growth was evaluated by the MTT (3-[4,5-dimethylthiazol-2-yl]-2,5-diphenyltetrazolium bromide) assay (10). The cells were seeded into 24-well tissue culture plates at 5×104 cells/well. Following treatment, MTT (Sigma) was added to each well at a final concentration of 0.5 mg/ml, followed by incubation at 37°C for 4 h. The medium was then removed and 800 μl dimethyl sulfoxide was added to each well. The absorbance of the mixture was measured at 490 nm using a microplate ELISA reader (Bio-Rad Laboratories, Hercules, CA, USA). The inhibition rate was calculated as follows: inhibition rate = [(mean control absorbance − mean experimental absorbance)/mean control absorbance] × 100%. To evaluate the effect of cantharidin and norcantharidin on cellular growth, the concentration that caused 50% growth inhibition (IC50) was calculated, as previously described (7).

The cells were seeded at a density of 200 cells/well in 24-well plates and treated 12 h later. After 15 days, the cells were stained with 1% methylrosanilinium chloride and the numbers of visible colonies were counted. The relative clone formation ability was calculated as relative clone formation ability = (mean experimental clone number/mean control clone number) × 100%.

Apoptosis was evaluated using the Annexin V-FITC/PI Apoptosis Detection kit (Biouniquer Technology, Nanjing, China) according to the manufacturer’s instructions. The cells were resuspended in binding buffer, and Annexin V-FITC and propidium iodide (PI) were added to the buffer and incubated at room temperature for 15 min in the dark, followed by flow cytometry using a Beckman Coulter FC500 dual-laser five-color flow cytometer (Beckman Coulter, Fullerton, CA, USA).

The cells were seeded in 96-well plates at a density of 1×104 cells/well and grown to confluence. The monolayer culture was then artificially scrape-wounded with a sterile micropipette tip to create a denuded zone (gap) of constant width. Each well was washed with phosphate-buffered saline (PBS) twice to remove the detached cells before treatment. Cells that had migrated to the wounded region were observed using an XDS-1B inverted microscope (Chongqing Optical & Electrical Instrument Co., Ltd., Chongqing, China) and photographed (x40 magnification). Images were captured every 4 h to monitor the wound healing process. The wound areas were measured using ImageJ (National Institutes of Health, Bethesda, MA, USA).

Fresh blood obtained from healthy volunteers was anticoagulated with a 1/7 volume of acid-citrate dextrose (85 mM trisodium citrate, 110 mM dextrose and 78 mM citric acid) as previously described (11). The Ethics Committee of the First Affiliated Hospital of Soochow University, Suzhou, China, approved the study. Platelet-rich plasma was collected after centrifugation at 1,300 rpm for 13 min. Then, CFDA-SE (carboxyfluorescein diacetate succinimidyl ester; Beyotime, Shanghai, China) was added at a final concentration of 5 μM and incubated at room temperature for 10 min. The fluorescence-labeled platelets were then washed twice with CGS buffer (0.12 M sodium chloride, 0.0129 M trisodium citrate and 0.03 M D-glucose, pH 6.5), resuspended in freshly prepared Tyrode’s buffer (11), and allowed to rest for at least 1 h at 37°C prior to use.

The traditional platelet adhesion assay was performed as previously described (12). In brief, 5×104 cells/ml MCF-7 cells were seeded in a 96-well plate and grown until confluent. Washed platelets preloaded with CFDA-SE were allowed to adhere to the cells for 30 min at 37°C. The non-adherent platelets were discarded. Platelet adhesion to the MCF-7 cells was imaged by Olympus IX51 inverted fluorescence microscopy (Olympus, Tokyo, Japan). The flow cytometry-based platelet adhesion assay was performed as follows: the cells were harvested and resuspended in RPMI-1640 containing 1 mM CaCl2, 1 mM MgCl2 and 0.1% bovine serum albumin. One hundred microliters of cells (5×106 cells/ml) were incubated with 400 μl CFDA-SE-labeled platelets for 30 min. Then, 4% paraformaldehyde (250 μl) was added to a final concentration of 2%. The cells were fixed for 1 h at 4°C, followed by flow cytometry analysis.

Abundance of α2 integrin on the cell surface

The abundance of α2 integrin on the surface of the MCF-7 cells was measured by flow cytometry. Following treatment, the cells were incubated with saturating concentrations (10 μg/ml) of anti-α2 integrin antibody clone P1E6 for 30 min at room temperature. Subsequently, the cells were incubated with 10 μg/ml fluorescein-isothiocyanate-conjugated anti-mouse antibody for 30 min at room temperature and were analyzed using a Beckman Coulter FC500 dual-laser five-color flow cytometer (Beckman Coulter).

Each experiment was performed in triplicate, at minimum. The results are expressed as the means ± standard deviation. Statistical analysis was performed using unpaired Student’s t-tests; P<0.05 was considered to indicate a statistically significant different.

We then focused on the effect of cantharidin and norcantharidin on the adhesion of MCF-7 cells to platelets. First, we observed the appearance of the cells following 24-h cantharidin and norcantharidin treatment. As shown in Fig. 2A, the untreated cells were confluent, whereas several gaps were observed in the cantharidin or norcantharidin-treated groups. This could have been due to the decreased cell number induced by growth inhibition, as well as the detachment triggered by the decreased adhesion ability and apoptosis as presented in Fig. 1. Thus, when the traditional platelet adhesion assay (12) was performed, the platelets adhered directly to the plate through the gaps (Fig. 2A). Therefore, the fluorescent intensity did not accurately reflect the actual ability of the MCF-7 cells to adhere the platelets.

α2β1 integrin, a heterodimeric transmembrane receptor composed of the α2 and β1 subunits, is expressed by some tumor cells to facilitate binding to the extracellular matrix. Recent studies have suggested that this adhesion molecule could be involved in the interaction between cancer cells and platelets (13). Therefore, we investigated whether the regulation of α2β1 integrin expression could facilitate the inhibition of cancer cell-platelet adhesion induced by cantharidin and norcantharidin treatment.

Mechanistically, cantharidin and norcantharidin have been shown to be potent and selective inhibitors of protein phosphatase 2A (PP2A) (14), a multimeric serine/threonine phosphatase that can dephosphorylate several kinases (15,16). In our previous studies (7–9), we found that extracellular signal-regulated kinase (ERK), c-Jun N-terminal kinase (JNK), IκB kinase (IKK) and protein kinase C (PKC) were activated following treatment with PP2A inhibitors. To investigate whether these pathways were involved in the downregulation of α2 integrin, we tested the expression of α2 integrin following cantharidin and norcantharidin treatment when these pathways were blocked (Fig. 4A).

However, for the present study, the number of cantharidin and norcantharidin-treated cells was inhomogeneous to that of the control group, as the growth was repressed and the cells detached due to apoptosis and the repressed adhesion. Moreover, the platelets could directly adhere to the plates. Thus, we developed a flow cytometry-based quantitative adhesion analysis for tumor cells and platelets. Both the cancer cells and platelets were suspended during the test, mimicking the physiological state. With this method, we found that as the platelet concentration increased, more cancer cells were covered with platelets. This result was in agreement with the clinical observation that an increased platelet level indicates poorer cancer prognosis (2,13). In addition, this method permitted the novel observation that cantharidin and norcantharidin could repress cancer cell adhesion to platelets, which could repress their metastatic potential.

As PP2A can induce the phosphorylation and activation of several substrate kinases, most of which can accelerate tumor growth (15,16,24), PP2A inhibition has always been considered to be cancer promoting. However, in our previous and present studies, we proved that PP2A inhibitor-induced kinase activation repressed cancer cell proliferation, induced apoptosis and reduced the metastatic potential, suggesting that these putative cancer inducers are actually potential anticancer drugs. 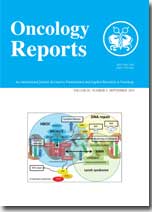