Breast cancer is one of the leading causes of cancer-related mortality among females in the developed world. Although therapies for human breast cancer have been developed, the mortality rate of breast cancer patients has remained unchanged. Therefore, the development of new strategies for more effective treatment is highly desirable, and chemotherapeutic use of phytochemicals as anticancer agents has received recent attention due to their low cytotoxicities and the low cost of plant-derived raw materials (1,2).

Since malignancy of tumors is generally attributed to their invasive and metastatic capacity, a therapeutic agent that only possesses the ability to induce apoptosis might not be effective against metastatic tumors. Metastasis is a multi-step process that involves the detachment of cancer cells from the primary tumor as well as their migration, adhesion and invasion into lymphatic vessels or blood. Next, extravasation from the vessels is mediated by the action of extracellular proteases, among which the matrix metalloproteinases (MMPs) have been demonstrated to play crucial roles. In particular, type IV collagenases or gelatinases (e.g., MMP-2 and MMP-9) are major enzymes in the degradation of a variety of extracellular matrix (ECM) components, leading to tumor migration, invasion and metastasis in numerous types of cancer (3,4). COX-2 is overexpressed throughout breast cancer progression. The upregulation of COX-2 and PGE2 might be involved in cancer cell invasion by stimulating the expression of MMPs. In fact, both MMP-2 and MMP-9 are overexpressed in breast cancer and are closely associated with metastasis, poor prognosis and a high mortality rate in breast cancer patients. Therefore, inhibition of MMP activity and expression is important for blocking the metastatic ability of breast cancer cells (3).

In general, MMP-2 is constitutively overexpressed in highly metastatic tumors, whereas MMP-9 can be stimulated by the inflammatory cytokine tumor necrosis factor (TNF)-α, the epidermal growth factor and phorbol esters through the activation of distinct intracellular signaling pathways. Moreover, stimulators, including cytokines and 12-O-tetradecanoylphorbol-13-acetate (TPA), regulate the expression of MMP-9 and COX-2 by controlling the activation of transcription factors, such as the nuclear factor (NF)-κB and the activator protein (AP)-1, since the promoter regions of MMP-9 and COX-2 possess NF-κB-binding sites (5,6). Two transcription factors, NF-κB and AP-1, regulate the expression of a number of genes and of the products associated with inflammation, tumorigenesis and metastasis. In fact, NF-κB and AP-1 are major transcription factors involved in the activation of genes encoding inflammatory cytokines, such as IL-1β and TNF-α. Additionally, NF-κB can induce the activation of COX-2 and MMP-9. Several reports have indicated that the early suppression of MMP-9 and COX-2 enzyme activity or expression could be used for preventing invasion and cancer metastasis (6–8). Therefore, agents possessing the ability to inhibit the expression of MMP-9 or COX-2 warrant investigation with regards to treatment of cancer cell invasion and metastasis.

HO-1 is an inducible enzyme that catalyzes the rate-limiting step for the oxidative degradation of cellular heme into carbon monoxide, biliverdin and free iron (9). HO-1 and its enzymatic byproducts provide host defense mechanisms such as antioxidant and anti-inflammatory effects. Experimental evidence has established HO-1 as a critical component of multiple signaling pathways that regulate proliferation and metastasis. Increased HO-1 expression likely plays an important role in the development and progression of breast cancer (10,11). Therefore, HO-1 might be an important therapeutic target for the treatment of human breast cancer.

In traditional Chinese medicine, Macleaya cordata (plume poppy) has long been used as a painkiller and an anti-inflammatory agent in humans. Macleaya cordata is a plant of the Papaveraceae family, which includes abundant bioactive compounds, mostly isoquinoline alkaloids such as allocryptopine, angoline, berberine, bocconine, bocconoline, chelerythrine, heleritrine, macarpine, protopine and sanguinarine (12,13). The capsule of M. cordata contains the highest level of sanguinarine and chelerythrine. Moreover, the highest amount of protopine and allocryptopine was found in the footstalks. In addition, M. cordata is recorded in the European Food Safety Authority (EFSA) list of plants utilized as ingredients of feed additives in animal production due to their anti-inflammatory activity. Sanguinarine and chelerythrine are biologically active components of these extracts (13–15). The chemical name of sanguinarine is 13-methyl[1,3] benzodioxole[5,6-c]-1,3-dioxolan[4,5-i] phenanthridinium. In particular, sanguinarine is noted for its pharmacological activity, e.g., its antihypertensive, cardiac and antitumor properties (14,16,17). In the present study, we investigated the inhibitory activity of sanguinarine on the TPA-induced upregulation of MMP-9 and COX-2 in human MCF-7 breast cancer cells. Here, we provide evidence that sanguinarine inhibits TPA-induced MMP-9 and COX-2 expression by blocking NF-κB, Akt and ERK1/2 signaling. Furthermore, we showed that sanguinarine inhibits the migration and invasion of breast cancer cells. Sanguinarine exhibits an anti-invasive activity related to the induction of HO-1 expression. These findings provide new insights into the mechanism by which sanguinarine mediates its anti-invasive activity and might thus be useful for developing novel therapeutic strategies to target breast cancer metastasis.

Human breast cancer cell line MCF-7 was obtained from the American Type Culture Collection (ATCC, Manassas, VA, USA). Cells were grown in RPMI supplemented with 10% heat-inactivated FBS and 1% penicillin-streptomycin at 37°C in a humidified incubator in a 5% CO2 atmosphere.

The cell invasion assay was conducted using BioCoat™ Matrigel™ invasion chambers according to the manufacturer's instructions. Briefly, the Matrigel coating was rehydrated in 0.5 ml of Dulbecco's modified Eagle's medium (DMEM) for 30 min immediately before the experiments. Cells (5×104) suspended in 0.5 ml of serum-free medium were added to the upper chamber of the Matrigel-coated filter inserts. Following treatment with sanguinarine for 1 h, 0.5 ml of serum-free medium containing 50 nM TPA was added to the bottom well as a chemoattractant. The chambers were then incubated for 24 h. Following incubation, cells on the upper side of the chamber were removed using cotton swabs, and cells that had migrated were fixed and stained with 2% ethanol containing 0.2% crystal violet powder. Invading cells were enumerated under a light microscope at ×10 magnification.

For the in vitro wound-healing repair assay (cell migration assay), the cells were seeded in a 24-well culture dish until they reached 90% confluence. The cells were then maintained in serum-free medium for 12 h. The monolayers were carefully scratched using a 200-μl pipette tip. Cellular debris was removed by washing with phosphate-buffered saline (PBS), and the cells were incubated in serum-free medium. The migrating cells were then fixed with cold 75% methanol for 30 min and washed three times with PBS. The cultures were photographed at 0 and 24 h to monitor the migration of cells into the wounded area, and then the closure of the wounded area was calculated.

The enzyme activities of MMP-2 and MMP-9 in conditioned medium were determined using the gelatin zymography protease assay. Briefly, cells (2×105) were seeded in 6-well plates and allowed to grow at 80% confluence. The cells were then maintained in serum-free medium for 12 h prior to treatment with sanguinarine and TPA for 24 h. Conditioned media were collected, cleared by centrifugation, and mixed with 2X SDS sample buffer (Invitrogen Life Technologies), followed by electrophoresis in a polyacrylamide gel containing 0.1% (w/v) gelatin. Following electrophoresis, the gels were incubated in renaturing buffer (2.5% Triton X-100) with gentle agitation to remove SDS, followed by incubation in developing buffer (50 mM Tris-HCl, pH 7.4 and 10 mM CaCl2) overnight at 37°C to allow digestion of the gelatin. Gels were then stained with SimplyBlue™ SafeStain (Invitrogen Life Technologies) until clear bands suggestive of gelatin digestion appeared.

Cells were harvested in ice-cold lysis buffer consisting of 1% Triton X-100, 1% deoxycholate and 0.1% SDS. The protein content of the cell lysates was then determined using the Bradford reagent (Bio-Rad Laboratories, Hercules, CA, USA). Proteins in each sample (50 μg of total protein) were resolved by 12% SDS-PAGE, transferred to a polyvinylidene difluoride membrane, and exposed to the appropriate antibodies. The proteins were visualized with the Enhanced Chemiluminescence Detection system (Amersham Biosciences, Piscataway, NJ, USA) using horseradish peroxidase (HRP)-conjugated anti-rabbit or anti-mouse secondary antibodies. Images were acquired using an ImageQuant 350 analyzer (Amersham Biosciences).

Cells were incubated with different concentrations of sanguinarine for 1 h and then with TPA for 23 h. The prostaglandin E2 levels were quantified in the culture medium using an enzyme-linked immunosorbent assay (ELISA) kit (Cayman Chemical, Ann Arbor, MI, USA) according to the manufacturer's instructions.

To detect the in vivo association of nuclear proteins with the human MMP-9 promoter, ChIP analysis was conducted as previously described (18), with some modifications. Briefly, 2×107 cells were incubated in culture medium containing 1% formaldehyde for 10 min at room temperature, and the cross-linking reaction was quenched by adding glycine to a final concentration of 0.125 M. Isolated nuclei were digested with 200 units of MNase at 37°C for 15 min, followed by sonication to produce chromatin of primarily mononucleosomal size. Fragmented chromatin was incubated with antibodies for 3 h at 4°C. Protein-DNA complexes were recovered using protein A agarose beads, washed, and then eluted with elution buffer. Cross-links were reversed at 65°C in 0.25 M NaCl overnight, and DNA was digested with proteinase K for 2 h at 50°C. DNA was isolated using a DNA Purification kit (Qiagen). Immunoprecipitated DNA was used for each PCR. PCR primers for the MMP-9 promoter (373 bp including the NF-κB cluster; GenBank accession no. AF538844) were as follows: sense (5′-CACTTCAAAGTGGTAAGA-3′), antisense (5′-GAAAGTGATGGAAGACTCC-3′) and for the COX-2 promoter (420 bp including NF-κB cluster): sense (5′-TCCCGACGTGACTTCCTCGA-3′) and antisense (5′-GGAGAG GAGGGAAAAATTTG-3′).

To determine the promoter activity, we used a Dual-Luciferase Reporter Assay system (Promega Corp., Madison, WI, USA). Cells were transfected with the NF-κB luciferase reporter plasmid or the AP-1 luciferase reporter plasmid (Agilent Technologies, Santa Clara, CA, USA) using the FuGENE-6 reagent according to the manufacturer's instructions. The Renilla luciferase control plasmid pRL-CMV (Promega Corp.) was co-transfected as an internal control to determine the transfection efficiency. Twenty-four hours following transfection, cells were incubated with the indicated reagents for 1 h and then treated with TPA for 24 h. The luciferase activity was assayed with a Dual-Luciferase Assay kit (Promega Corp.) according to the manufacturer's instructions. The luminescence was measured with a GloMax® 96 Microplate Luminometer (Promega Corp.).

Each experiment was repeated at least three times and all results are expressed as the mean ± SE. Statistical analysis was performed using the SPSS software (version 18.0) to determine significant differences. We used one-way analysis of variance (ANOVA) followed by Tukey's post-hoc test for comparisons between three or more groups. Data with p<0.05 were considered to indicate statistically significant differences.

Metastasis is a complex and multi-step process and is considered the leading cause of cancer-related mortality (20). Since proteolytic digestion of ECM and migration of cancer cells across the blood vessel-lining endothelial monolayers play crucial roles in the metastatic process, we investigated the effects of sanguinarine on the invasive property of breast cancer cells. The inhibitory effect of sanguinarine on migration of breast cancer cells was determined by a wound-healing assay. The confluent (~90% of the maximum cell density) monolayer was first scraped and then scratched using a micropipette. Following incubation with sanguinarine, cells were stimulated with TPA. The data presented in Fig. 4A indicate that sanguinarine suppressed TPA-induced cell migration to the denuded area. To further determine the effect of sanguinarine on the invasive activity of human breast cancer cells, the Matrigel Transwell invasion assay was used. The results showed that the number of cells invading the lower chamber was dramatically reduced following sanguinarine treatment when compared to the TPA-treated group in MCF-7 cells (Fig. 4B). Thus, we demonstrate that sanguinarine might be an effective agent in preventing cell migration and invasion of MCF-7 cells.

Recently, considerable attention has been given to the use of natural products as novel effective anticancer agents in humans (1,2). Sanguinarine is a benzophenanthridine alkaloid with a wide range of preclinical antitumor activities in hepatocellular carcinoma, prostate cancer, osteosarcoma cancer and bladder cancer (13,15,16). Although sanguinarine has been shown to exert antitumor effects in various models, only a few studies have reported the antitumor properties of sanguinarine and the mechanism by which sanguinarine interacts with human breast cancer cells. Therefore, in the present study, we examined the potential role of sanguinarine as a chemotherapeutic agent, in particular during metastasis, using MCF-7 human breast cancer cells.

The present study was supported by the Basic Science Research Program through the National Research Foundation of Korea (NRF) funded by the Ministry of Education, Science and Technology (2012R1A1A3010601). 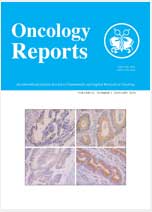