Cetuximab, a specific anti-epidermal growth factor receptor (EGFR) monoclonal antibody, is used in cancer treatment. Although development of resistance to cetuximab is well recognized, the underlying mechanisms remain unclear. In the present study, we characterized cetuximab-resistant oral squamous cell carcinoma (OSCC) cell lines. The human OSCC cell lines HSC3, HSC4 and SAS were used in the present study. Effects of inhibitors including cetuximab on growth in cells were assessed by MTT assays. Southern blotting and immunofluorescence analysis were performed to examine protein expression and localization. Sphere formation was used to characterize stem cell-like properties. Floating aggregation culture was used for anchorage-independent growth. Cetuximab inhibited proliferation of HSC3 and HSC4 cells, but not SAS cells. Proliferation of all three cell lines was inhibited by the EGFR/ErbB2/ErbB4 inhibitor II. The EGFR inhibitor AG1478 strongly inhibited HSC3 and HSC4 proliferation, but that of SAS cells only moderately. EGFR proteins were localized on cell surface and phosphorylated in all three cell lines. SAS cells could proliferate in serum-free monolayer culture and formed spheres from single cells in floating culture. HSC3 and HSC4 could not proliferate under serum-free culture conditions and could not form spheres. Growth of SAS spheres required serum, and was inhibited by both AG1478 and cetuximab. Thus, cetuximab-resistant SAS cells not only engaged in EGFR-independent growth but also exhibited stem cell-like properties. However, growth was EGFR-dependent in aggregation culture, and the SAS cell aggregates became cetuximab-sensitive. This suggests that cetuximab sensitivity is not only cell-type-dependent but is also affected by the growth microenvironment.

The epidermal growth factor receptor [(EGFR)/ErbB1/HER1)] is a member of the ErbB tyrosine kinase family, which consists of ErbB1, ErbB2 (HER2), ErbB3 (HER3) and ErbB4 (HER4). All receptors of the ErbB family activate and regulate diverse cellular processes, including proliferation, survival, adhesion, migration and differentiation (1). Ligand binding potentiates receptor interaction with either a homologous molecule (homodimerization), a different ErbB-family receptor, or another cell surface tyrosine kinase receptor (IGF-1R or c-Met) (heterodimerization) (2–5). Dimer formation causes autophosphorylation of a tyrosine residue in the cytoplasmic domain and activates proteins triggering downstream events. Such proteins include MAPK, PI3K/AKT, phospholipase Cγ, PKC and STAT. Thus, EGFR proteins indirectly regulate gene expression. Variants of the genes encoding the EGFR family are oncogenes of various tumors. Upregulation of EGFR expression in many human epithelial cancers is associated with advanced tumor stage and an unfavorable prognosis (6,7). Thus, EGFR is considered to be not only a useful prognostic biomarker but also a promising therapeutic target, and specific anti-EGFR monoclonal antibodies (mAbs) to extracellular domains of the proteins, and tyrosine kinase inhibitors (TKIs), have been developed and used in cancer treatment.

Cetuximab is a chimeric IgG1 monoclonal antibody that binds with high affinity to the extracellular domain of EGFR (8). The antibody blocks EGFR activation by preventing tyrosine kinase-mediated phosphorylation of the protein (9). In addition, antibody binding may trigger antibody-dependent cellular cytotoxicity (ADCC); the host immune system may attack cells covered with antibody bound to EGFR (10,11). Downstream effects of cetuximab include promotion of apoptosis, inhibition of cell cycle progression, tumor cell invasion and angiogenesis.

Cetuximab has been prescribed for patients with metastatic colorectal cancer (mCRC) (12–16) and head and neck squamous cell carcinoma (HNSCC) (17–21). Effects of monotherapy of cetuximab are shown in 13% of recurrent or metastatic HNSCC and improvement of overall survival benefits is shown in combination with radiation or other chemotherapy (17,18). However, use of EGFR inhibitors containing cetuximab is associated with severe side-effects, a low reaction rate, and recurrence following treatments. These problems must be solved (21,22). Thus, it is important to understand not only how cetuximab acts but also the mechanisms of cetuximab resistance. To date, various resistance mechanisms of cetuximab have been described. These fall into two categories. First, resistance may develop via constitutive activation of growth caused by changes in effectors of the EGFR signal transduction pathway (23–26). Second, proliferation may be stimulated by activation of receptors other than EGFR (27–30). However, the detailed features of cetuximab remain elusive.

Three human OSCC cell lines, HSC3, HSC4 and SAS provided by the RIKEN BioResource Center (Ibaraki, Japan), were used in the present study. The cells were cultured in Dulbecco’s modified Eagle’s medium (DMEM) supplemented with 10% (v/v) fetal calf serum (FCS) (both from Life Technologies, Japan) at 37°C in a humidified atmosphere of 5% (v/v) CO2 in air. Cetuximab (Erbitux®) was purchased from Merck Serono (Tokyo, Japan). AG1478 and the EGFR/ErbB2/ErbB4 inhibitor II were from Calbiochem (Merck Millipore, Billerica, MA, USA). Antibodies used for western blot analyses and immunofluorescence were from the following sources; antibodies against EGFR and phosphorylated EGFR were obtained from Cell Signaling Technology (Denvers, MA, USA); the antibody against α-tubulin was from Sigma-Aldrich (St. Louis, MO, USA); and that against Ki-67 from Dako (Tokyo, Japan).

Human OSCC cells (2×103/well) were plated in 96-well plates. After 24 h of growth, various reagents were added at the indicated concentrations and growth continued for a further 2, 4 or 6 days. All experiments were performed in triplicate. Cell proliferation was assessed using the CellTiter 96® Non-Radioactive Cell Proliferation Assay (Promega, Tokyo, Japan).

To further characterize the cetuximab resistant OSCC cells, which are also AG1478 resistant, we compared the proliferative properties and sphere-formation capacities of the three cell lines. Fig. 2A shows that proliferation in monolayer culture was promoted by serum in a concentration-dependent manner. HSC3 and HSC4 cells proliferated only slightly over 6 and 4 days, respectively of serum-free culture. Notably, however, SAS cells proliferated strongly in serum-free medium over 4 days of culture.

We next analyzed the sphere formation capacity of single cells growing in serum-free sphere formation medium supplemented with bFGF and EGF (36). Suspensions of 1×103 cells were diluted so that U-shaped wells of low-adhesion 96-well plates received single cells in suspension, and the cells were cultured for 10 days. SAS cells formed spheres from single cells (Fig. 2B), and sphere diameter increased as culture time rose (Fig. 2B and C). In contrast, HSC4 cells did not form spheres from either single (Fig. 2B and C) or multiple cells (Fig. 2B). Thus, cetuximab-resistant SAS cells exhibited cancer stem cell-like characteristics but cetuximab-sensitive cells were incapable of forming growing aggregates.

HSC4 cells, similar to SAS cells, could form aggregates containing many cells, but unlike SAS aggregates, the HSC4 aggregates had poor growth characteristics. To compare the growth potential of OSCC cell lines under anchorage-independent culture conditions, 5×103 of the HSC3, HSC4 and SAS lines were seeded into U-shaped wells of low-adhesive 96-well plates and cultured in DMEM supplemented with 10% (v/v) FCS. Fig. 3A and B shows that all cell lines formed aggregates on the first day of culture, but HSC3 and HSC4 aggregates were smaller than those formed by SAS cells and the diameters of the former aggregates did not increase thereafter. HSC4 aggregates were maintained for 6 days, but cell-cell contact was weak and dissociated cells became obvious in HSC3 aggregates. Conversely, the SAS aggregates increased in diameter as culture proceeded, and the aggregates were subjected to immunofluorescence staining using anti-Ki-67 antibody. Many nuclei of SAS aggregates stained with this antibody, but Ki-67-positive nuclei were absent from HSC4 cell aggregates (Fig. 3C), indicating that SAS aggregation reflected proliferation of aggregated floating cells and that HSC4 could not proliferate in aggregation culture even in the presence of serum.

In the present study, we evaluated the proliferative behavior of oral SCC cell lines including cetuximab-sensitive HSC3 and HSC4 and cetuximab-resistant SAS. Notably, all cell lines expressed EGFR in the cell membrane and phosphorylated, regardless of cetuximab sensitivity status.

The monoclonal antibody cetuximab targets the extracellular domain of EGFR with high specificity and affinity (37). Cetuximab blocks ligand binding and thereby inhibits EGFR phosphorylation (9). Thus, cetuximab should inhibit EGFR-dependent cell proliferation. In the present study, proliferation of HSC3 and HSC4 cells was strongly associated with EGFR ligand-EGFR signaling, since proliferation was markedly reduced by the EGFR kinase inhibitor AG1478. Thus, cetuximab prevented EGFR phosphorylation, reducing proliferation of HSC3 and HSC4. These data are consistent with those of a previous report that EGFR biomarker analysis in non-small cell lung carcinoma patients showed that those with higher EGFR expression levels obtained more therapeutic benefit from cetuximab than did patients with lower EGFR levels (38). However, we found that SAS proliferation was not affected by cetuximab, although SAS cells expressed EGFR, which was localized in the cell membrane and phosphorylated, as did HSC3 and HSC4 cells. A previous report showed that colorectal cancer patients with EGFR-negative tumors could nonetheless respond to cetuximab-based therapies (12). Collectively, the data suggest that EGFR status does not seem to have predictive value when used to gauge the efficacy of cetuximab treatment in oral cancer patients.

Although cetuximab is a valuable drug, both intrinsic resistance to the material and the development of acquired resistance, are well-recognized problems. Several mechanisms of resistance to cetuximab have been described. Western blot and immunofluorescence analysis showed that the expression level and localization of EGFR in SAS cells were similar to those of cetuximab-sensitive cell lines, indicating that neither the expression and activity level of EGFR (39), nor inappropriate cellular distribution of EGFR (28,40) was probable cause of the drug resistance shown by SAS cells. However, the fact that phosphorylated EGFR is expressed by SAS cells suggests that EGFR is indeed stimulated by a ligand in such cells and plays a role in the regulation of a function other than growth, which may in turn be affected by cetuximab. Proliferation of SAS monolayer cultures was completely inhibited by EGFR/ErbB2/ErbB4 inhibitor II, but only moderately by AG1478, indicating that SAS proliferation was regulated principally by a receptor of the ErbB family other than EGFR. SAS cells also actively proliferated in serum-free culture. Such autonomous growth of SAS cells was strongly inhibited by EGFR/ErbB2/ErbB4 inhibitor II and moderately suppressed by AG1478 (data not shown), as was also true of growth in serum-containing culture. These results suggest that SAS cells express a high level of ErbB ligands, binding to ErbB receptors other than EGFR, thus explaining the cetuximab resistance of such cells. It was previously reported that HB-EGF played an important role in the development of cetuximab resistance in HNSCC (41).

Sphere formation revealed the stem cell-like properties of SAS cells. HSC3 and HSC4 cells essentially lacked such properties, being unable to form spheres from single cells. This suggests that expression of stem cell-like features is associated with cetuximab resistance under anchorage-dependent growth conditions. Spheres were grown in sphere medium supplemented with bFGF and EGF, but not if EGF was absent. SAS aggregates grew in DMEM supplemented with 10% (v/v) FCS but HSC3 and HSC4 aggregates did not, although cells of all three tested lines formed aggregates. SAS aggregates did not grow in serum-free DMEM, rather requiring serum components including EGF. Aggregated growth was inhibited by cetuximab and AG1478. Thus, SAS cells lost the ability to proliferate autonomously in anchorage-independent aggregation culture; such growth was rather controlled by the EGFR pathway. It thus appears that the cetuximab sensitivity status of stem cell-like cancer cells is affected by the cellular microenvironment.

In summary, cetuximab resistant OSCC cells not only engaged in EGFR-independent growth in monolayer culture but also exhibited stem cell-like properties. However, growth was EGFR-dependent in aggregation culture of the cell, and the cell aggregate became cetuximab-sensitive. We found that cetuximab sensitivity is not only cell-type-dependent but is also affected by the growth microenvironment.

This study was supported by funding from the Osaka University and Osaka Dental University. 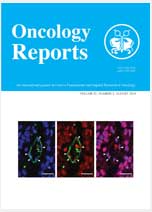