Malignant mesothelioma is a highly aggressive tumor, and an effective strategy for its treatment is not yet available. Long non‑coding RNAs (lncRNAs) have been reported to be associated with various biological processes, including the regulation of gene expression of cancer‑related pathways. Among various lncRNAs, plasmacytoma variant translocation 1 (PVT1) acts as a tumor promoter in several human cancers, but its mechanism of action has not yet been elucidated. Increased PVT1 expression was identified in ACC‑MESO‑1, ACC‑MESO‑4, CRL‑5915, and CRL‑5946 mesothelioma cell lines. PVT1 expression was investigated in mesothelioma cell lines by reverse transcription‑quantitative polymerase chain reaction and its functional analysis by cell proliferation, cell cycle, cell migration, and cell invasion assays, as well as western blot analysis of downstream target genes. Knockdown of PVT1 expression in these cell lines by small interfering RNA transfection resulted in decreased cell proliferation and migration and increased the proportion of cells in the G2/M phase. The results of reverse transcription‑quantitative polymerase chain reaction analysis revealed that PVT1 knockdown in mesothelioma cell lines caused the downregulation of Forkhead box M1 (FOXM1) expression, while the results of western blot analysis revealed that this knockdown reduced FOXM1 expression at the protein level. In addition, combined knockdown of PVT1 and FOXM1 decreased the proliferation of mesothelioma cell lines. In conclusion, PVT1 and FOXM1 were involved in the proliferation of cancer cells. Therefore, PVT1‑FOXM1 pathways may be considered as candidate targets for the treatment of malignant mesothelioma.

Non-coding RNAs are RNA molecules that are transcribed from the genome but do not encode proteins. They have been revealed to play structural and functional roles within the cell (6–10). They are primarily grouped into two classes based on transcript size: Small non-coding RNAs and long non-coding RNAs (lncRNAs) (11). Small non-coding RNAs include microRNAs (miRNAs) that function as major regulators of gene expression and complex components of cellular gene expression networks. In contrast to miRNAs, lncRNAs are a class of RNA transcripts that are over 200 nucleotides in length (12). lncRNAs have been associated with various biological processes, including epigenetics, alternative splicing, and nuclear import; additionally, they function as precursors of small non-coding RNAs, and regulators of mRNA decay (13–15). Dysregulated lncRNA expression has been reported in numerous cancers, suggesting that lncRNAs are a newly emerging class of oncogenic and tumor-suppressor genes (16).

Mesothelioma cell lines (3×105 cells) were transfected with 15 pmol of PVT1/NC siRNA or 7.5 pmol of FOXM1/NC siRNA in 6-well plates at 37°C in a humidified incubator supplied with 5% CO2 for 72 h. RNA was extracted from the cells using Maxwell® RSC simplyRNA Cells Kit and Maxwell® RSC Instrument (both from Promega Corporation) according to the manufacturer's protocols. The extracted RNA was reverse-transcribed with SuperScript IV VILO Master Mix (Thermo Fisher Scientific, Inc.) and amplified using Power Up SYBR Green Master Mix (Thermo Fisher Scientific, Inc.) on an AriaMx Real-Time PCR System (Agilent Technologies, Inc.) according to the manufacturer's recommended protocols. In brief, qPCR was performed with initial denaturation at 95°C for 10 min followed by 40 cycles of denaturation at 95°C for 15 sec and annealing and elongation at 60°C for 1 min, and a dissociation curve condition from 95°C to 60°C. Relative expression levels were calculated using the comparative 2-ΔΔCq method (26). Expression levels were normalized against those of glyceraldehyde 3-phosphate dehydrogenase (GAPDH). The primer sequences used for RT-qPCR were as follows: PVT1 forward, 5′-TGAGAACTGTCCTTACGTGACC-3′ and reverse, 5′-AGAGCACCAAGACTGGCTCT-3′; FOXM1 forward, 5′-GGAGCAGCGACAGGTTAAGG-3′ and reverse, 5′-GTTGATGGCGAATTGTATCATGG-3′; and GAPDH forward, 5′-ACAACTTTGGTATCGTGGAAGG-3′ and reverse, 5′-GCCATCACGCCACAGTTTC-3′.

Mesothelioma cell lines (3×103 cells) were incubated with 1 pmol PVT1/NC siRNA or 0.5 pmol FOXM1/NC siRNA in 96-well plates at 37°C in a humidified incubator supplied with 5% CO2 for 3 days. The proliferation rate was determined at 24, 48 and 72 h using 100 µl of 2X Cell Titer-Glo 2.0 reagent (Promega Corporation), which assesses the number of viable cells relative to the ATP level, with a GloMax Explorer microplate reader (Promega Corporation) according to the manufacturer's protocols.

Mesothelioma cell lines (1×105 cells) were transfected with 5 pmol PVT1/NC siRNA in 24-well plates for 3 days, and subsequently the cells were collected after trypsinization and fixed in 70% ethanol in 15-ml centrifuge tubes at room temperature for ~3 h. After ethanol removal, the cells were stained with 200 ml of Guava Cell Cycle Reagent (Luminex Corporation) at room temperature shielding away from the light for 30 min. The reagent containing propidium iodide discriminates the cells at different stages of the cell cycle by labeling cellular DNA. The labeling signal intensity was evaluated using a Guava EasyCyte Mini flow cytometer (Guava Technologies) according to the manufacturer's protocols. Analysis of raw data was performed with FCS express 5.0 (De Novo Software).

The migration ability of all four mesothelioma cells was analyzed using a wound scratch assay. Serum starved mesothelioma cell lines grown to 80% confluence were incubated overnight with 5 pmol PVT1/NC siRNA in collagen-coated 24-well plates at 37°C in a humidified incubator supplied with 5% CO2. Wounds were created by scratching the cells with 1-ml micropipette tips. The wells were washed twice to remove floating cells. Images of the gap area (wound) were captured every 24 h (for ACC-MESO-1 every 12 h) using a CKX53 inverted light microscope equipped with a DP21 digital camera (Olympus Corporation), and the gap area was further analyzed using T Scratch software version 1.0 downloaded from https://github.com/cselab/TScratch (27).

The experiments were performed at least three times in triplicate. Experimental data are expressed as the mean ± standard deviation. The statistical significance of the difference between two groups was analyzed using unpaired Student's t-test with the default function of Microsoft Excel version 16.53. P<0.05 was considered to indicate a statistically significant difference.

Malignant pleural mesothelioma (MPM) is an aggressive form of cancer. Patients with malignant mesothelioma are treated with surgery, radiotherapy, chemotherapy, and targeted drug therapy. However, the survival rates of MPM patients remain extremely low, with survival ranging from 5 to 13.2 months (29).

In a previous study, the median survival period did not improve beyond 13–29 months with extended pleurectomy/decortication and 12–22 months with extrapleural pneumonectomy (30). Therefore, feasible and effective therapeutic targets need to be identified. In the present study, the biological function of PVT1-FOXM1 was investigated as a possible novel target in malignant mesothelioma.

As they regulate gene expression and function at the transcriptional, translational, and post-translational levels, lncRNAs are important in tumor growth and metastasis (31,32). Wright et al have previously revealed various dysregulated lncRNAs involved in the pathogenesis of malignant mesothelioma using NCode long noncoding microarrays and their potential to serve as biomarkers in MPM (33). However, the mechanisms of these lncRNAs have not yet been described in detail. Non-coding transcripts from our previous gene expression microarray analysis of malignant mesothelioma and lung adenocarcinoma were extracted and analyzed and numerous upregulated lncRNAs were identified, including PVT1, MEG3, and H19 (24). Riquelme et al previously suggested that c-Myc and PVT1 copy number gain may promote a malignant phenotype of mesothelioma with PVT1, demonstrating a tendency to upregulate proliferation and inhibit apoptosis (34). The biological functions of PVT1 in malignant mesothelioma have not been fully established; however, previous studies have revealed that PVT1 knockdown inhibits cell proliferation and induces apoptosis through suppression of c-Myc in leukemia (19) and breast cancer (22). PVT1 binds competitively with microRNA-424, which has been reported to increase radiosensitivity by regulating CARM1 in non-small cell lung cancer (18). PVT1 led to increased proliferation and invasion of glioma (35) and hepatocellular carcinoma (20) by targeting EZH2. In the present study, increased expression of PVT1 in mesothelioma and lung adenocarcinoma cell lines was revealed by RT-qPCR, and PVT expression was revealed to be ~2 times higher in mesothelioma than in lung adenocarcinoma cell lines. PVT1 knockdown of mesothelioma cell lines revealed reduced cell proliferation with G2/M arrest and migration.

FOXM1, a member of the FOX transcription factor family 1, is associated to cell viability and is considered a key gene in the carcinogenic pathway. Previous studies have indicated that FOXM1 participates in drug resistance, cancer, and metastasis of cancers (36–38). Several previous studies have demonstrated that FOXM1 is overexpressed in multiple cancers, such as ovarian (39), colon (40), gastrointestinal (41), and non-small cell lung cancer (42). Increased FOXM1 expression was also observed in mesothelioma cell lines, and knockdown of mesothelioma cell lines decreased their proliferation.

PVT1 was revealed to promote tumor progression by interacting with FOXM1 in ovarian and gastric cancer (43,44). In the present study, it was also revealed that PVT1 knockdown in mesothelioma cell lines downregulated FOXM1 expression.

Funding: This research received no specific grant from any funding agency in the public, commercial, or not-for-profit sectors. 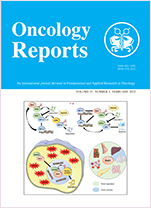