Epigenetic events during the process of cell transformation induced by carcinogens (review).

Recent studies clearly demonstrate that several environmental carcinogens lack the ability to initially induce genetic damage. In that view, multistage chemical carcinogenesis may be processed under the control of a variety of epigenetic events in addition to genotoxic impacts. The understanding of this mechanism as reviewed in this report requires knowledge of early changes induced by carcinogens in target cells, biochemical, biological and molecular reactions closely related to both sides of the growth equation: cell proliferation and programmed death. Among several cell transformation models, the most suitable for carcinogen detection and mechanistic study is the Syrian hamster embryo (SHE) cell transformation assay. This closely mimics the multistage carcinogenesis and we can examine, in a relatively short time (8 days), the mechanisms by which genotoxic and non-genotoxic agents may increase the frequency of cell transformation as a preneoplastic end-point. The mode of action of hundred of compounds, carcinogens and non-carcinogens, has been explored so far using one-stage and two-stage treatment protocols. In general, with the two-stage protocol, all carcinogens, irrespective of their genotoxic or non-genotoxic potential, give unambiguous positive results. Since perturbations of cell proliferation and death are considered essential events in the process of carcinogenesis, studies have been conducted on the dysregulation of two specific parameters, the induction of ornithine decarboxylase (ODC) an enzyme related to cell proliferation, and the apoptosis rate, when SHE cells are exposed to carcinogens. In one-stage treatment (5 h-24 h), only the promoter TPA induces ODC activity, while other carcinogens do not increase this activity. Using the two-stage exposure protocol (1 h xenobiotic/5 h TPA), all carcinogens both genotoxic and non-genotoxic, are able to stimulate ODC activity above the level obtained with TPA alone. Based on the two-stage treatment with carcinogens a close relationship can be obtained between the ODC superinduction and the increase of morphological cell transformation frequency. In cancer development, it is postulated that the inhibition of apoptosis may help altered cells to escape cell death and acquire a tumorigenic phenotype. Two-stage treatment carcinogen/TPA, effectively decreases the apoptotic rate. This is accompanied by an upregulation of the Bcl-2 oncoprotein, a well-known apoptotic inhibitor. However, treatment with a non-carcinogen phthalic anhydride, also inhibits apoptosis while it does not superinduce ODC activity. Although inhibition of apoptosis is not specific to the carcinogenic compound, both superinduction of ODC activity and inhibition of apoptosis via Bcl-2 upregulation may cooperate during the early stages of the carcinogenic process. In a long-term stage transformation assay, the rate of transformed colonies is relatively low (2-8%) bringing about the slow evolution of tumoral disease in humans and tumoral induction in rodents. This could be the consequence of the activation of various cellular repair mechanisms during the exposure time. Experimental data reported so far point out that genotoxic and non-genotoxic carcinogens, thought to be more active in the initiation or in the promotion stage, must share the same stage pathway leading to cancer development. 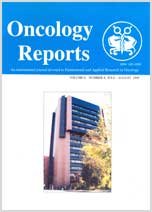