A high estrogenic environment in utero may increase subsequent breast cancer risk. It was therefore determined whether a maternal exposure during pregnancy to the phytoestrogen genistein or zearalenone, both of which exhibit estrogenic activities in vitro and in vivo, alters breast cancer risk among female offspring. Pregnant rat dams were treated daily with subcutaneous injections of 20, 100 or 300 microgram genistein, 20 microgram zearalenone, or vehicle between days 15 and 20 of gestation. The offspring were given 7, 12-dimethylbenz(a)anthracene (DMBA) at the age of 2 months to induce mammary tumors. The results indicate that in utero exposure to genistein, but not to zearalenone, dose-dependently increased the incidence of DMBA-induced mammary tumors, when compared with the controls. Tumor growth characteristics were not altered. Prior to the carcinogen administration, the number of estrogen receptor (ER) binding sites, determined using a ligand binding assay, were significantly elevated in the mammary glands of genistein offspring. In contrast, the mammary protein kinase C (PKC) activity was significantly reduced in the genistein offspring. Our results suggest that a maternal exposure to subcutaneous administration of genistein can increase mammary tumorigenesis in the offspring, mimicking the effects of in utero estrogenic exposures. Further, increased ER protein levels and reduced PKC activity in the mammary gland may be involved in increasing susceptibility to carcinogen-induced mammary tumorigenesis in rats exposed to genistein in utero. 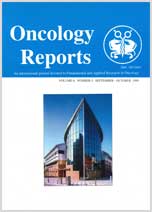