DNA methylation status of hMLH1, p16INK4a, and CDH1 is not associated with mRNA expression levels of DNA methyltransferase and DNA demethylase in gastric carcinomas 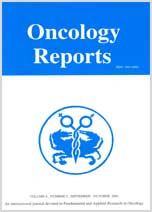