The epithelial cell adhesion molecule (EpCAM) gene has been found to be highly expressed in carcinomas of various origins; however, the molecular mechanisms underlying the transcriptional regulation of EpCAM remain poorly understood. The purpose of this experiment was to study the relationship between EpCAM gene overexpression and CpG island methylation status in the promoter region in cell cultures and normal colon epithelial and colorectal cancer tissues. Real-time quantitative PCR and bisulfite sequencing PCR were employed to detect EpCAM gene expression and to analyze the methylation status of the CpG islands. In addition, EpCAM gene expression and methylation status of CpG islands were studied in promoter methylation cell lines treated with a DNA methyltransferase inhibitor. It was found that most CpG dinucleotides were unmethylated in cell lines and cancer tissues where the EpCAM gene was highly expressed whereas most CpG dinucleotides were methylated in EpCAM gene unexpressed cell lines and normal colon tissues. When cells were treated with demethylating agent, CpG islands were demethylated, although EpCAM gene expression did not increase suggesting that unmethylation of the EpCAM promoter region was not responsible for EpCAM overexpression. The results of the study described herein suggest that unmethylation of the EpCAM promoter region was associated with EpCAM overexpression; however, it was not responsible for EpCAM overexpression by itself. Further research is required to determine which factors are responsible for EpCAM gene expression. 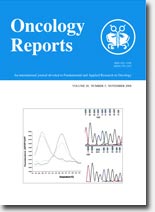