Cimetidine, a histamine-2 (H2) receptor antagonist, has been demonstrated to have anticancer effects on various types of malignancies. However, the mechanisms of its action on gastric cancer are not completely understood. This study was designed to investigate its antitumor effect and underlying mechanisms in human gastric cancer SGC-7901 and MGC-803 cells. The MTT assay was used to evaluate cell viability, and flow cytometry, acridine orange staining and transmission electron microscopy were used to detect apoptosis, for cultured cells. The protein expression in cells was evaluated by Western blot analysis and colorimetric assay. Gastric tumors were established by subcutaneous injection of SGC-7901 cells in nude BALB/c mice, and cimetidine was administered to the mice. The size of tumors was monitored and the weight of tumors was examined. The exposure of gastric cancer cells to cimetidine resulted in growth inhibition and the induction of apoptosis in a dose-dependent manner. Activation of the caspase cascade for both the extrinsic and intrinsic pathways were demonstrated in vitro, including caspase-8, -9 and -3. We also found that the expression of Bcl-2 protein decreased and the expression of Bax protein increased which lead to an increase of the Bax/Bcl-2 ratio. In mice bearing SGC-7901 xenograft tumors, administration of cimetidine showed a significant decrease of tumor volumes and tumor weight compared with the control. Our results showed that cimetidine exhibited antitumor effects in gastric cancer cells with an induction of apoptosis. 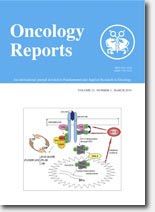