Liver regeneration is a hyperplastic phenomenon of residual livers in response to partial hepatectomy (PH) or liver damage. Liver regeneration has been an advantage in liver cancer surgery and transplantation from a medical viewpoint (1). Therefore, it is important to elucidate the mechanisms underlying liver regeneration for the development of regenerative medicine.

Rodent PH models have been a useful tool in the investigation of signals that regulate this regenerative response (2,3). Growth factors, such as hepatocyte growth factor (HGF), epidermal growth factor (EGF) or insulin growth factor (IGF) and cytokines, such as IL-6 or TNF-α, have been shown to play important roles in the early phase of liver regeneration by using rodent PH models (4–6). HGF is synthesized by non-parenchymal (particularly stellate) cells in the liver and binds to the c-Met receptor of hepatocytes. HGF activates a variety of downstream pathways, including the mitogen-activated protein kinase (MAPK) signaling pathway which is involved in cell growth and enhances DNA synthesis of hepatocytes during liver regeneration (4–6). TNF-α, as an initiation factor of liver regeneration, stimulates Kupffer cells in the liver. Subsequently, IL-6 is produced in Kupffer cells by the activation of NF-κB and stimulates janus kinase (JAK)/signal transduction and activator of transcription (STAT) by binding to its receptor (IL-6R) in hepatocytes, resulting in hepatocyte proliferation (4–6). However, studies on TNF-α and IL-6 knockout mice have demonstrated that these factors are not key to liver regeneration (7,8). Thus, multiple pathways are currently considered to be involved in the initiation of liver regeneration.

Eight-week-old specific pathogen-free (SPF) male BALB/c mice were purchased from Clea Japan Inc. (Tokyo, Japan). Mice were maintained in a temperature-controlled room on a 12-h light-dark cycle, with free access to water and standard chow. Seventy percent PH was performed on anesthetized mice, according to the procedure described by Higgins and Anderson (2). Mice were sacrificed at five time points: 0, 2, 6, 12 and 24 h post PH (n=3 at each time point). All animal experiments in the present study were performed according to the Guidelines of the University of Tsukuba for the Care of Laboratory Animals and the Regulation for Animal Experiments.

For microarray analysis, the hepatectomized 8-week-old BALB/c mice were sacrificed at the time points indicated above and the residual livers of mice were collected, immediately frozen in liquid nitrogen and stored at −80°C until use. For histological analysis, the residual livers at each time point were fixed with 4% (w/v in phosphate-buffered saline; PBS) ice-cold paraformaldehyde solution overnight. The fixed livers were washed in PBS, dehydrated in ethanol and embedded in paraffin blocks.

Total RNAs from frozen livers were isolated using the ISOGEN kit (Nippon Gene, Tokyo, Japan), according to the manufacturer’s instructions. The quality and concentration of total RNAs were assessed with a NanoDrop Spectrophotometer (NanoDrop Technologies, Wilmington, DE, USA), according to the manufacturer’s instructions. Total RNA samples exhibited 260/280-nm absorbance ratios of 1.8–2.0. The integrity of the RNAs was assessed using the Agilent 2100 Bioanalyzer (Agilent Technologies, Santa Clara, CA, USA) and the RNA 6000 Nano LabChip kit (Agilent Technologies), revealing RNA integrity numbers (RIN) of the samples to be >8.0; these RNA samples were considered suitable for microarray analysis.

The expression data obtained were processed using GeneSpring GX12 software (Agilent Technologies) to perform a log transformation and normalization to the 75th percentile of all values on respective microarrays, followed by normalization of the median expression level of all samples. Additionally, the normalized data of gene expression were filtered on flags and genes classified as either flag-[Detected] or flag-[Not Detected] were allowed to pass the filter. The expression profiles at each time point, i.e., 2, 6, 12 and 24 h post PH against 0 h were compared using GeneSpring GX12 software. To identify genes with statistically significant differences at each time point, a Kruskal-Wallis test with a P-value cutoff of 0.05 was performed. The up- and downregulated sense/antisense transcripts were selected by fold changes (>2.0) at each time point against 0 h and by signal intensities (>100.0).

In order to confirm the histological characteristics of liver regeneration, hematoxylin and eosin staining was performed on the sections of regenerating livers as described above. As shown in Fig. 1, hepatocellular morphological changes were insignificant at 2 h post PH; however, fat droplets appeared in hepatocytes at 6 h post PH. Hepatocellular expansions were recognized at 12 h post PH and hepatocellular proliferation images were observed at 24 h post PH. These observations were consistent with those previously reported regarding liver regeneration (18).

Upregulated 97 (20 of the 97 indicated) and downregulated 7 sense transcripts in the early phase of liver regeneration.

When we investigated whether the same genes were observed in the sense and antisense transcripts, four genes (Apoa4, Hp, Fgb and Fgg) exhibited upregulation in the sense and antisense transcripts during liver regeneration (Fig. 2, Tables I and II). Apolipoprotein A-IV (APOA4) is a component of chylomicrons and high-density lipoprotein (http://omim.org/entry/107690). Haptoglobin (HP), combines with free plasma hemoglobin, preventing loss of iron through the kidneys (http://omimorg/entry/140100). FGB and FGG are members of the fibrinogen family and function as factor I of blood coagulation for hemostasis (http://omim.org/entry/134830; http://omim.org/entry/134850). The expression of these genes was indicated to be under complex control in liver regeneration. To verify that these expression levels were the results of liver regeneration and were not due to the skin incision, we attempted to design strand-specific primers in the sequences used for the microarray probe and succeeded in synthesis of primer pairs of the Apoa4, Hp and Fgb transcripts (Table III). Subsequently, the amounts of the Apoa4, Hp and Fgb transcripts were measured in regenerating liver samples using strand-specific RT-qPCR and compared to liver samples of sham-operated mice. As shown in Fig. 3, the strand-specific RT-qPCR demonstrated that the expression patterns of the genes were essentially identical to those described above. 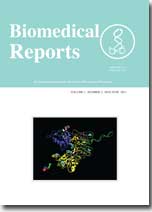