Anti?inflammatory effects of ozonated water in an experimental mouse model

Previous studies have suggested that ozonated water is safe and possesses antibacterial effects for treatment of experimental peritonitis rats. In this study, we evaluated the anti?inflammatory effects of ozonated water that was intraperitoneally injected into an experimental inflammatory mouse model. The concentrations of dissolved ozone decreased constantly and lineally, while the half?life of dissolved ozone was 36.8±2.7 min (27?C). The 10?ppm ozonated water was injected intraperitoneally into mice with lipopolysaccharide (LPS)?induced acute inflammation. The results showed that the intraperitoneal injection of ozonated water decreased the levels of tumor necrosis factor?? (TNF??) and increased the activity of superoxide dismutase (SOD). The results suggest that ozonated water has anti?inflammatory properties and is a potential therapeutic option for acute inflammation.

Ozone (O3) is a triatomic molecule that contains three oxygen atoms and has a molecular weight of 47.98 g/mol. O3 is a thermodynamically unstable molecule which, depending on system conditions such as temperature and pressure, has a short half-life and decomposes into molecular oxygen (O2) (1). O3 gas is used in medicine for ozone-therapy, which involves the administration of an O3/O2 gas mixture (2). This O3/O2 mixture exhibits various effects on the immune system, such as modulating the phagocytic activity of peritoneal and alveolar macrophages (3,4). O3 increases the activity of antioxidant enzymes including glutathione peroxidase, superoxide dismutase (SOD) and catalase, thus preparing the host to face physiopathological conditions mediated by reactive oxygen species (ROS) (4,5).

Findings of previous studies have shown that prolonged inhalation of O3 gas damages the respiratory system (6–12) and extrapulmonary organs (13,14). A series of meta-analyses and evaluation of geographic and seasonal O3 gas-related risk has provided evidence for the association between O3 gas and mortality (15–19). As O3 inhalation is accompanied by dangerous side-effects and since O3 is a gas, its benefits are limited. To increase the effectiveness and safety of ozone treatment, ozone may be dissolved in water. This is advantageous as ozonated water is easier to administer and safer than ozone gas. However, devices to produce ozonated water, which can precisely regulate the concentration of the dissolved ozone gas are not cost effective. Therefore, ozonated water is not widely used.

Ozonated water has been shown to possess antibacterial effects (20,21). Ozmen et al (22) reported that ozonated saline was effective as irrigation for treating experimental peritonitis rats. To the best of our knowledge, the side-effects of ozonated water have not yet been reported. In this study, we developed a new device to produce ozonated water, which is more cost effective than previously used devices. We also evaluated its anti-inflammatory effects on an acute inflammation experimental mouse model.

The ozonated water-producing device was provided by Sakuragawa Pump Co., Ltd. (Osaka, Japan). This device can produce ozonated water from O2 and tap water and can set the concentration of the dissolved O3. The tap water used in this study contained sodium (6.5 mg/l), chloride (6.4 mg/l), calcium and magnesium (25.4 mg/l). Bacteria was not detected in the tap water. The pH of the tap water was 7.1. Ozonated water was used within 10 min following production.

BALB/c mice (females, 7-week-old) were purchased from CLEA Japan (Osaka, Japan). The animals were maintained under conventional conditions and used for the experiment after 7 days of acclimation. The use of these mice and the procedures were approved by the Animal Research Committee of Tottori University.

Mice were randomized into 3 groups: non-treatment (NT) (n=3), control (n=3) and ozonated water-treated group (n=3). The control and ozonated water-treated group mice were injected with 1 ml of saline or the ozonated water (10 ppm) intraperitoneally every 24 h for 5 days. LPS (Wako Co., Ltd., Osaka, Japan) was dissolved into saline (0.2 mg/ml). Twenty-four hours after the last injection of saline or ozonated water, all nine mice were injected 1 mg/kg LPS intraperitoneally. After 1 h, the mice were sacrificed and blood samples were collected. The blood serum was separated by centrifugation at 500 × g for 10 min at 4°C and the sera were stored at −80°C for subsequent analysis.

Data were expressed as mean ± standard error. Statistical analysis was performed using one-way analysis of variance followed by the Tukey-Kramer test. P<0.05 was considered to indicate a statistically significant difference.

Measurement of the half-life of the dissolved ozone

Oxidative damage to vital cellular molecules and structures such as DNA, lipids, proteins and membranes is induced by ROS (23). The mitochondrial electron transport chain is a major source of intracellular ROS and is susceptible to damage initiated by ROS (24). ROS potentially induces cellular antioxidant defense enzymes, including SOD (25). Previously, it has been shown that exposure to LPS increases circulating neutrophils (26) leading to systemic oxidative stress (27). Tissue neutrophils, macrophages and monocytes secrete inflammatory cytokines including TNF-α (28,29). Previous reports indicate O3 has strong antioxidant activities (4,5). In the present study, the serum level of TNF-α and SOD serum activity were significantly decreased and increased, respectively, in the ozonated water-treated compared to the other groups. Inflammatory cytokines, including TNF-α, are major mediators of inflammation in peritonitis (30). Since O3 therapy induces oxidation in the body, the activities of antioxidant enzymes such as SOD are increased subsequent to O3 treatment (5,31). In the experimental septic rat model, the therapeutic effect of O3 treatment in the rectum was confirmed (32). Our results show the ozonated water also exhibit antioxidative and anti-inflammatory activities. Previous studies indicate ROS was produced following endotoxin shock-activated nuclear factor (NF)-κB and increased the production of inflammatory cytokines (33–35). Overexpression of SOD suppresses TNF-α production in human breast cancer cells (36). Our findings may indicate that ozonated water increased the activation of SOD, which decreased ROS levels. However, additional studies should be performed to gain an understanding of the mechanism involved in the anti-inflammatory effects of ozonated water.

In conclusion, our results have shown that ozonated water exerts critical anti-inflammatory effects. In addition, ozonated water is useful as a therapeutic option for acute inflammation. 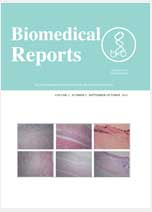