Cancer has become a significant disease for humans. In the USA alone, there were ~1.6 million new cases and 577,190 predicted mortalities in 2012. Among all types of cancer, prostate cancer is one of the top causes of male cancer fatalities worldwide (1). It is predicted that 233,000 new cases of prostate cancer will occur in America during 2014 (2).

Several treatments are available for treatment of prostate cancer, by overcoming the aggressive tumor. These include surgery, radiation, radioactive implants and hormonal therapy. However, the treatment often impacts the quality of life due to side-effects or complications (3). Thus, numerous investigators have focused on discovering novel drugs or treatments. Among all the agents tested, natural products derived from medicinal plants are among the most favorable.

S. wallichii Korth. leaves were collected from Lembang, West Java, Indonesia. The plant species was identified at the Department of Biology, Faculty of Mathematics and Natural Sciences, University of Padjadjaran (West Java, Indonesia).

The S. wallichii leaves were dried and extracted with 70% ethanol at room temperature three times for 24 h each. A concentrated extract was obtained in vacuo at 50°C. The ethanol extract was partitioned into n-hexane, ethyl acetate and aqueous phases. Column chromatography on a Wakogel C 200 (Wako Pure Chemical Industries, Ltd., Osaka, Japan) column was performed to the ethyl acetate fraction, as it was previously reported as the most active fraction against cancer cell lines, using a mixture of n-hexane, ethyl acetate and methanol with increasing polarity. The major compound observed was purified using silica G 60 with sulfuric acid ethanol (1:9) and was found to be the most active fraction of S. wallichii, which was characterized and analyzed as described previously (4). The isolate was, however, identified by spectroscopic methods (ultraviolet, infrared and nuclear magnetic resonance) and liquid chromatography mass spectrometry (5).

The LNCaP human breast cancer cell line was purchased from Dainippon Pharmaceutical (Tokyo, Japan). The non-cancerous esophageal cell line (CHEK-1, an immortalized human esophageal cell line) was provided by Dr H. Matsubara. CHEK-1 was established by the transduction of the human papillomavirus type 16 E6/E7 into primary cultures of esophageal keratinocytes (6). The cell lines were cultured in RPMI-1640 medium (Sigma, St. Louis, MO, USA) supplemented with 10% fetal bovine serum and antibiotics (100 U/ml penicillin and 100 µg/ml streptomycin). For the cell treatments, various concentrations of kaempferol-3-O-rhamnoside were added to the cell culture medium for 24 h, at which time the medium was replaced. The cells were subsequently collected at the indicated times.

A cell proliferation analysis was performed in the presence of various concentrations of kaempferol-3-O-rhamnoside using a colorimetric MTT assay, as described in a previous study (7). Briefly, the cells were plated in 96-well plates (2×104 in 50 µl/well). Following the initial cell seeding, the indicated concentrations of extract were applied and incubated for 24 h. WST-8 assay cell-counting solution (10 µl) (Dojindo Lab., Tokyo, Japan) was added to each well and incubated at 37°C for 3 h. After the addition of 1 M HCl (100 µl/well), the cell proliferation rates were determined by measuring the absorbance at a wavelength of 450 nm with a reference wavelength of 650 nm using a microtiter plate reader (Becton-Dickinson, Franklin Lakes, NJ, USA). The results were derived from triplicate experiments.

Isolation and identification of kaempferol-3-O-rhamnoside

Kaempferol-3-O-rhamnoside treatment of the LNCaP cells induced the upregulation of caspase-8, caspase-9 and caspase-3 in a time-dependent manner (Fig. 3). Furthermore, the changes in the expression levels of PARP, a hallmark biomarker of apoptosis, suggested that kaempferol-3-O-rhamnoside may induce apoptosis on LNCaP cells through the activation of caspase-dependent signaling pathways after 24 h of treatment.

S. wallichii plants are found in Asia, from Indochina to Papua New Guinea. Several of the compounds found in S. wallichii, including alkaloids and tannins, are ethnobotanically used for snake and insect bites (8). A previous study reported the antimicrobial activity of the hydroalcoholic extract from the S. wallichii bark against Escherichia coli, Pseudomonas aeruginosa and Shigella species (9). Furthermore, our previous study also reported the antiplasmodial properties of S. wallichii and its component, kaempferol-3-O-rhamnoside, against chloroquine-resistant Plasmodium falciparum (10).

In the present study study, kaempferol-3-O-rhamnoside inhibited the proliferation of LNCaP cells in a dose-dependent manner. Notably, the cell proliferation inhibition by kaempferol-3-O-rhamnoside was lower on the non-cancerous CHEK-1 cells. Kaempferol-3-O-rhamnoside may possibly be considered less harmful to non-cancerous cells. Furthermore, the study also showed that the anticancer properties of kaempferol-3-O-rhamnoside occurred via the upregulation of caspase-8, caspase-9, caspase-3 and finally PARP, the marker of apoptosis. Caspases are synthesized as inactive precursors. There are numerous caspase-activation pathways that promote apoptosis, such as mitochondrial stress by apoptosome pathways, death receptor engagement and granzyme B-induced caspase activation (11). Caspase-9 is activated by mitochondrial stress. Divergent cellular stresses, such as DNA damage, heat shock and oxidative stress, may result in caspase-9 activation through the release of cytochrome c to the cytoplasm. Efflux of cytochrome c stimulates several high molecular weight caspase-activating complexes in the cytoplasm. Cytochrome c is a major component of the apoptosome and it activates caspase-9. Caspase-8 and caspase-3, however, are activated by granzyme B. This pathway shows that there are several cytotoxic granules from cytotoxic T cells, natural killer cells and granzyme B. Granzyme B will activate caspase-3 and caspase-8 to facilitate the destruction of the target cells (11). Therefore, these results showed that the potential anticancer properties of kaempferol-3-O-rhamnoside trigger death extrinsically via caspase-8 activation and intrinsically via caspase-9 activation in the LNCaP cells.

In conclusion, although further toxicity studies and activity enhancing structure modifications are required, the results of the present study indicate the potential application of kaempferol-3-O-rhamnoside in cancer treatment.

The authors would like to thank Dr Yudi Padmadisastra for his valuable guidance during this research. 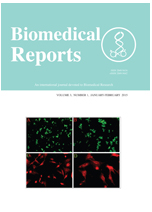