HMGB1: A new marker for estimation of the postmortem interval

In recent years, research associated with forensic medicine has at times been regarded as insufficient and of poor quality, particularly when parameters such as journal impact factors and external findings are taken into account. Forensic medicine involves different tasks as compared with clinical medicine (1). Estimation of the postmortem interval (PMI) is one of the most important tasks in forensic medicine (2). In the last 60 years, numerous methods have been proposed for the determination of the time since death by chemical means (3). Previous contributions have reviewed the historical background of this discipline and important postmortem processes, and have discussed the scientific basis underlying attempts to determine the time interval since death (4). Biochemical markers that help to evaluate the time since death have been investigated. These include protein fractions, urea, creatinine, glucose, iron, potassium, calcium, enzymes, immunohistochemical detection of insulin in pancreatic β-cells, the myo-albumin fraction and the level of strontium-90 calcium analogs (2,5–13). Using medical techniques such as measurement of body temperature, analyzing the liver, or assessing rigor mortis, the time since death can be accurately measured only for the first two or three days after death (4). The number of studies estimating the PMI has a reverse correlation with its importance and value in practice (14). Therefore, research on estimating the PMI is most important.

High mobility group box-1 (HMGB1) is primarily a nuclear protein present in many eukaryotic cells and has a highly conserved amino-acid sequence among species. HMGB1 appears to have two distinct functions in cellular systems. First, it acts as an intracellular regulator of transcription, having a crucial role in the maintenance of DNA function. Second, HMGB1 translocates to the outside of the nucleus in all eukaryotic cells upon necrosis, and is released from macrophages through activation by lipopolysaccharides (LPS), tumor necrosis factor (TNF)-α, interleukin (IL)-1 and interferon (IFN)-γ (15,16).

Studies demonstrating a role for HMGB1 in the PMI are lacking. Postmortem change induces necrosis, and necrotic cells release HMGB1 (16), so detection of serum HMGB1 exuded from corpus necrotic tissue may be related to PMI. In the present study, the postmortem change in serum HMGB1 in the bodies of dead rats at three environmental temperatures was detected. The aim of our study was to investigate the potential use of serum HMGB1 as an estimation of the PMI. Serum HMGB1 during the postmortem period was analyzed by enzyme-linked immunosorbent assay (ELISA).

Animal procedures were conducted with the approval of the Animal Care Committee of the Ethics Board of the Institute of Laboratory Animal Sciences of Kagoshima University (Kagoshima, Japan).

Blood samples were collected from the heart and great vessels at autopsy. Samples were centrifuged immediately for 5 min at 5000 rpm. Serum was stored at −80°C until analysis.

The concentration of HMGB1 in serum was measured using an ELISA kit (Shino-Test Corp., Kanagawa, Japan).

Statistical analysis was carried out using the Student’s t-test. P<0.05 was considered significant.

Postmortem change induces necrosis, and necrotic cells release HMGB1 (16). In the present study, the postmortem change in serum HMGB1 in the bodies of dead rats at three environmental temperatures was detected. At 24°C, the serum HMGB1 level reached a peak on the second day with a time-dependent decrease in the following days whereas, at 14°C the level reached a peak at day 3 with a plateau in the following days (Fig. 1). The HMGBi level showed a time-dependent increase at 4°C. The standard deviation (SD) of HMGB1 levels was very small; reproducibility was probably high. The increase and decrease in HMGB1 levels at postmortem time was extemely large.

Assessment of the PMI by HMGB1 measurement is a useful method. Serum samples of only 10 μl are required, and organs do not need to be homogenized. HMGB1 levels can be obtained in just two days using ELISA. The HMGB1 level in a dead body can be used to estimate the PMI. Postmortem analysis of HMGB1 levels could provide an insight into the biochemical changes that occur after death, and could also present potential indicators for assessment of the PMI.

The high level of HMGB1 in the bodies of dead rats may have been exuded from necrotic cells in the tissue of the heart and the great vessels, and not released only from blood cells.

HMGB1 has been identified to be a potent pro-inflammatory and cytotoxic cytokine (17). HMGB1 has a critical role in sepsis, cancer, disseminated intravascular coagulation, rheumatoid arthritis, cerebral infarction, myocardial infarction, periodontitis and xenotransplantation (18–27). The serum HMGB1 level is elevated in human patients with various diseases. In previous studies, serum HMGB1 levels were elevated in patients with myocardial ischemia (median, 159 ng/ml), cerebral ischemia (median, 218 ng/ml), sepsis (median, 83.7 ng/ml) and pancreatitis (median, 5.4 ng/ml) (19,28,29). The maximal serum HMGB1 level is approximately 200 ng/ml. The level of serum HMGB1 in dead rats is very high, suggesting that the cause of death may not influence postmortem serum HMGB1 levels when estimating the PMI.

Body temperature was not measured in the present study, but postmortem temperature has been reported in several publications (30–32).

In recent years, research associated with forensic medicine has sometimes been regarded as insufficient and of poor quality (1). Forensic medicine has been removed as an academic discipline from universities in some countries (33). Yet, forensic medicine has made advances. In addition to traditional invasive ‘body-opening’ autopsy of postmortem investigation in humans, virtual ‘body non-opening’ autopsy has been conducted using CT and MRI (34,35). HMGB1 analysis may be a new method in forensic medicine. The data in the present study demonstrate that this technique may be a major advance in the determination of the time since death, providing reliable semi-quantitative biochemical markers from blood samples as opposed to estimates such as those based on direct measurement of temperature. HMGB1 is a new postmortem marker and could be a tool for the estimation of the PMI in the short- and long-term. Further investigations into the timing and physical factors that affect postmortem levels of HMGB1 in different tissues are essential, but detection of HMGB1 permits the development of techniques for the precise determination of the PMI. Upon further validation, this method could be used in combination with established methods to improve estimation of the PMI. 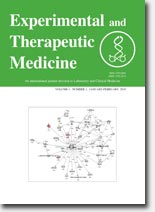