A therapeutic role of STI571 (imatinib mesylate) has been anticipated in patients with c-Kit positive neuroectodermal tumors. We examined the efficacy of STI571 to inhibit expansion of c-Kit positive neuroectodermal tumor cell lines in vitro and in a mouse model inoculated with ES (Ewing sarcoma) derived tumor cells, and investigated the molecular mechanism of STI571 action. Eleven tumor lines of ES, PNET (primitive neuroectodermal tumors) and NB (neuroblastoma) were assayed in the presence of 1, 5, 10, 15, 20 or 30 µM STI571 for 24, 48, 72 h and 7 days. The mechanism of STI571 action was investigated using a microphysiometer cytosensor that determines cellular metabolic rates in the presence of STI571. c-Kit and global protein phosphorylation was assayed by immunoprecipitation and a direct enzyme-linked immunoadsorbent assay after 72 h of 10 µM STI571. Apoptosis was investigated by propidium iodide (PI), Annexin V staining and by enzymatic activity of caspase-3. Moreover, apoptotic gene expression was investigated using microarray technology. In nude mice, tumor volume and histology were analyzed in STI571 treated and untreated mice, and apoptotic gene expression analysis was performed on tumor masses. A decrease in cell proliferation and increase of cell apoptosis was caused by STI571 in a concentration- and time-dependent manner. Cytosensor microphysiometer and immunoprecipitation experiments demonstrated a time- and concentration-dependent decrease of cellular metabolic activity and global protein dephosphorylation after STI571 exposure. The inhibition by STI571 appeared at least to some extent independent of c-Kit inhibition since cells remained sensitive to SCF stimulation. Tumor volume was significantly reduced in STI571-treated mice compared to tumors from control inoculated non-treated mice. The apoptosis pathway in response to STI571 appeared not to be dependent on caspase activation, while gene expression profiles suggested accumulation of reactive oxygen species (ROS) resulting in cell death after exposure to STI571. The results point to the potential relevance of STI157 for neuroectodermal tumor therapy in view of its inhibitory effect on tumor cell growth, in spite of the observation that the inhibition of the c-Kit signaling pathway is not critically involved. 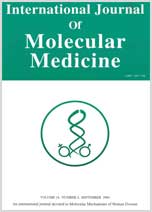