The human p63 gene encodes a series of proteins that differ in their N- and/or C-terminal sequences and have widely differing properties in promoting or repressing p53-related functions such as growth arrest and apoptosis. In addition, p63 has important roles in the maintenance and differentiation of epithelial cell populations. Squamous cell carcinomas of the head and neck (SCCHN) express high levels of ΔNp63 and p63β isoforms compared to normal tissue from the same patients, suggesting a role for these isoforms in the pathogenesis of this common human malignancy. Here, we explore the function of p63 in SCCHN cells by using small interfering RNA (siRNA) to silence the expression of different isoforms in two SCCHN cell lines, FaDu and SCC-25. Silencing results in statistically significant decreased survival for tumour cells when all p63 isoforms, the N-terminal truncated or the α isoforms are inhibited. No effect was observed on cell proliferation or on the expression of epithelial differentiation markers. We also demonstrate that inhibition of endogenous p63 expression sensitises cells to the effects of ionizing radiation and cisplatin, common treatments for SCCHN patients. The data indicate that p63 has oncogenic properties in SCCHN and is predominantly involved in maintaining cell survival, rather than acting as a directly proliferative factor or as an inhibitor of terminal differentiation. Moreover, targeted inhibition of p63 expression in SCCHN could be a useful adjunct for conventional treatments of this disease. 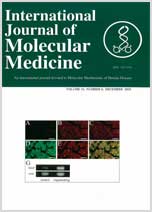