Vitamin K2 (VK2) has a growth inhibitory effect on various types of cancer cells in vitro, and its efficacy has been demonstrated in clinical applications in a number of patients with leukemia and hepatocellular carcinoma. In this study, the effect of cell growth inhibition and apoptosis induction and the concomitant use of an anticancer agent by VK2 (menaquinone: MK4), on gastric cancer cell lines were examined. When 4 kinds of gastric cancer cells (KATO III, MKN7, MKN74 and FU97) were exposed to MK4, the cell growth was inhibited in an MK4 dose-dependent manner. Morphologically, apoptosis induced by MK4 was recognized in FU97, but only a slight number of apoptotic images was recognized in other cell lines. On the contrary, in all the cell lines, the percentage of APO2.7 positive cells increased significantly in the MK4-treated group as compared to the controls. Caspase-3 activity increased significantly in KATO III and FU97 as compared to the controls, while no significant differences were noted in MKN7 or MKN74. Moreover, in all the cell lines, the percentage of G0/G1-phase cells (≈70% in KATO III and FU97, and ≥80% in MKN7 and MKN74) increased in comparison to the controls, suggesting that cell-cycle arrest had occurred. All of the gastric cancer cell lines were given MK4 in different concentrations and two kinds of anticancer agent, with the result that cell growth was inhibited by the anticancer agent in a dose-dependent manner when it was given with MK4 in concentrations of up to 10 µM. In conclusion, our results demonstrate that the effect of MK4 on apoptosis and cell-cycle arrest differs in differentiated (MKN7, MKN74) and undifferentiated (KATO III, FU97) gastric cancer cell lines, and that MK4 alone or with anticancer agents has an antitumor effect on gastric cancer cell lines. 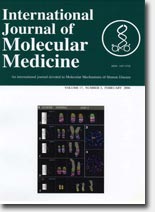