MicroRNA-21 promotes the cell proliferation, invasion and migration abilities in ovarian epithelial carcinomas through inhibiting the expression of PTEN protein

Ovarian cancer, especially epithelial ovarian cancer (EOC), which accounts for 90% of ovarian cancer, continues to be the leading cause of death among gynecological malignancies. However, the factors associated with its malignant biological behavior are still poorly understood. Accumulating evidence suggests that microRNAs (miRNAs), regulating diverse biological processes, may play an important role in tumorigenesis and development. miR-21 has been frequently observed to be aberrantly overexpressed in various tumors. Using real-time PCR, we confirmed that miR-21 was significantly overexpressed in human EOC tissues and cell lines. The overexpression of miR-21 correlated with histological differentiation, clinicopathological stage, and lymph node metastasis, and we showed that knockdown of miR-21 by an inhibitor caused a significant reduction in cell proliferation and decrease in cell migration and invasion abilities. Furthermore, we demonstrated that knockdown of miR-21 significantly increased the expression of PTEN, a known tumor suppressor in ovarian cancer. Collectively, our findings suggest miR-21 may be important in the initiation and progression of EOC as an oncomiR, likely through regulating PTEN. 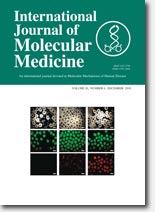