Chlorpyrifos (CPF) is commonly used for agricultural and domestic applications, and its contamination is widely detected in environmental media, and in a broad spectrum of field crops, fruits and vegetables. CPF exposure causes many adverse effects on human health including hepatoxicity, neurotoxicity and endocrine disruption. However, few studies have been conducted thus far to investigate the potential influence of CPF exposure on iron metabolism at concentrations that do not trigger significant cell death. Iron metabolism is concertedly governed by the hepcidin-ferroportin axis, where hepcidin is the central hormone involved in the regulation of iron absorption and release, while ferroportin is the only known iron exporter that functions by iron egress from cells. In the present study, we demonstrated that CPF treatment at a non-toxic concentration greatly enhanced ferroportin gene transcription in human macrophage THP-1 cells. CPF significantly inhibited hepcidin expression in human hepatocyte HepG2 cells. As a result, the intracellular labile iron pool (LIP) was largely reduced in THP-1 and HepG2 cells. The combined data of this study identified a novel finding of CPF that disrupts iron homeostasis by altering ferroportin and hepcidin expression. These findings would be useful in understanding the biological effects of CPF exposure, especially under relatively low and non-toxic doses.

As one of the largest produced and used pesticides, chlorpyrifos (CPF) is widely distributed in various environmental media, and in fruits and vegetables (1–3). Numerous studies have suggested that CPF may elicit adverse effects on human health (4–6). Thus far, CFP is known as an acetylcholinesterase (AChE) inhibitor, and induces significant damage to the central nervous system (7). In addition to neurological toxicities, CFP has been found to induce reactive oxygen species (ROS), and thus cause DNA damage in several organs of animal models (8,9). Other studies have shown that CPF exposure is associated with developmental disorders, autoimmune disorders (10,11), and even cancers, such as lung and breast cancer (12,13). Moreover, histological examinations also show that CPF administration leads to substantial injury to liver, resulting in infiltration of macrophages in the portal area in an animal study (9).

Liver is the central organ governing systemic iron homeostasis, where hepcidin is primarily secreted by hepatocytes and regulates iron flux by interacting with its receptor ferroportin, which is associated with the internalization and degradation of ferroportin, thereby reducing iron egress from macrophages and iron absorption from the small intestine (14–16). Iron, an essential element, is important for a variety of biological processes (17,18). Systemic iron homeostasis is deliberately modulated by the hepcidin-ferroportin regulatory axis (14,19–21). Ferroportin is the only known mammalian iron exporter, mainly expressed in epithelial cells in duodenum and macrophages, and is critical for controlling iron egress (15,16). Through the hepcidin-ferroportin axis, downregulated hepatic hepcidin increases the serum iron level by promoting iron absorption from enterocytes in duodenum and iron release from macrophages (22). Increased ferroportin concentration enhances iron egress from cells, thereby decreasing intracellular iron (23).

However, studies available on CPF-conducted impairments to liver-centered iron homeostasis are currently limited, and the present literature even remains contradictory. Furthermore, little insight has been gained into potential effects of CPF on the hepcidin-ferroportin axis, and the molecular mechanisms responsible for CPF-mediated actions on iron metabolism remains to be clarified. To the best of our knowledge, in the present study, we demonstrated for the first time that CPF was able to disturb iron metabolism by enhancing ferroportin expression in macrophages and inhibiting hepcidin expression in hepatocytes at sublethal concentrations.

Cell viability was determined through the Alamar blue assay according to the manufacturer’s instructions (Thermo Fisher Scientific, Inc.). Briefly, THP-1 and HepG2 cells were seeded in 96-well plates at a concentration of 5.0×103 cells/well. The cells were then treated with CPF for 24 h, followed by emission detection at 590 nm with excitation at 530 nm.

Total RNAs were isolated from cells with TRIzol according to the manufacturer’s instructions (Invitrogen Life Technologies, Carlsbad, CA, USA). The first strand of cDNA was synthesized from 2 μg total RNAs using oligo(dT) primer. Primer sequences used for the PCR reaction were: hepcidin, 5′-CCTGACCAGTGGCTCTGTTT-3′ (forward) and 5′-CACATCCCACACTTTGATCG-3′ (reverse); GAPDH, 5′-GAAGGTGAAGGTCGGAGT-3′ (forward) and 5′-GAAGATGGTGATGGGATTTC-3′ (reverse). GAPDH was used as an internal control.

A DNA fragment with ferroportin promoter region was subcloned into the pGL3-Promoter luciferase reporter vector (Promega) to replace the SV40 promoter. The final construct was validated by DNA sequencing (Invitrogen). Then, 0.8 μg target construct plus 80 ng Renilla luciferase construct were co-transfected into HEK293T cells in 24-well plates using Lipofectamine™ 2000 (Invitrogen). After 24 h, the cells were washed with PBS, and assayed for luciferase activity using a dual-luciferase reporter assay system according to the manufacturer’s instructions (Promega). Relative firefly luciferase activities were subsequently normalized to those of Renilla luciferase.

Intracellular LIP was measured as previously described (25). Briefly, the cells were collected and washed following treatments, and subsequently incubated with 0.5 μM calcein acetoxymethyl ester (CA-AM) (Sigma-Aldrich) for 15 min at 37°C. After washing with PBS, the cells were equally divided into two groups. One group was treated with 100 μM desferoxamine (DFO; Sigma-Aldrich) for 1 h at 37°C, and the second group was left untreated. The cells were subjected to FACS analysis (FACSCalibur; BD Biosciences, San Jose, CA, USA), where calcein was excited at 488 nm and measured at 525 nm. Intracellular LIP was obtained through deduction of the cellular fluorescence of DFO-treated cells from that of the untreated cells.

Significance of data between two groups was determined by the two-tailed independent t-test. One-way analysis of variance (ANOVA) was employed to assess the mean differences among groups relative to the control. Experimental data were shown as mean ± standard error (SE). P<0.05 was considered to indicate a statistically significant result.

To examine the potential effects of CPF exposure on iron metabolism, two cardinal types of cells were employed to determine systemic iron flux, macrophages and hepatocytes (16,26,27). The THP-1 human macrophage and HepG2 human hepatic carcinoma cell lines were used. In order to dissect the non-toxicity biological effects from cytotoxicity, in other words, to focus on the biological effects of CPF without exerting significant injuries on cells, concentrations that did not induce significant toxicity to cells were initially obtained. THP-1 and HepG2 cells were treated with different concentrations of CPF for 24 h, and cell viabilities were measured using the Alamar blue assay. No alterations of cell viability were observed when the concentrations of CPF were <80 μM for THP-1 cells, while cell viability was reduced >10% at 80 μM (P<0.05) and subsequently reduced by >30% at 100 μM (P<0.05) (Fig. 1A). With respect to HepG2 cells, no detectable cytotoxicity occurred when the cells were treated with CPF up to 100 μM CPF (P>0.05) (Fig. 1B). Therefore, in the present study, a non-toxic (i.e., sublethal) concentration, 20 μM, was selected for the subsequent experiments. Notably, the medium of 20 μM CPF contained 0.001% DMSO only. Medium with 0.001% DMSO caused no toxicity to cells compared to the complete blank control, and it served as a control in the present study (designated as control or cont in the text and figures).

To substantiate the regulation of ferroportin by CPF at the transcriptional level, we performed the luciferase reporter assay to examine ferroportin expression driven by its own promoter upon CPF (Fig. 3). Following exposure to CFP at 20 μM for 24 h in HEK293T cells, luciferase activity was measured. Compared to the control, CPF treatment increased luciferase activity by ~2.5-fold (P<0.05) (Fig. 3), supporting the transcriptional regulation of ferroportin by CPF. These data together identified a novel effect of CPF on promoting ferroportin expression in macrophages.

To understand the biological effects of CPF on iron metabolism, hepatic hepcidin expression was investigated. As the master regulator of systemic iron homeostasis, hepcidin is predominantly secreted by hepatocytes (31). Additionally, hepcidin directs iron flow by suppressing ferroportin-conducted iron release (32). Hepcidin reduction is associated with increased iron egress and intracellular iron depletion. HepG2 cells were similarly treated with CPF at 20 μM. After 24 h, we found that the hepcidin mRNA level was greatly reduced by CPF (Fig. 4A). The quantified data showed an ~50% reduction of the hepcidin mRNA level in CPF-treated cells relative to the untreated cells (P<0.05) (Fig. 4B). Consistent with previous studies (33), DFO was used as a control to inhibit hepcidin expression (P<0.05) (Fig. 4). These results demonstrated a considerable inhibitory effect of CPF on hepatic hepcidin expression.

The available section of intercellular iron occurred in loosely-bound divalent iron form (i.e., LIP). It was readily and rapidly involved in the synthesis of iron-sulfur clusters, heme and other iron-containing proteins (34,35). LIP was largely determined by the concentrations of iron exporter ferroportin and iron-storage protein ferritin (35). Thus, the intracellular iron concentration was sensitively reflected by the availability and abundance of cellular LIP. To elucidate the consequential effects on iron storage following CPF exposure in THP-1 and HepG2 cells, we assayed LIP in the two types of cells following CPF treatment at 20 μM for 24 h. As shown in Fig. 5A the level of intracellular LIP was markedly reduced by ~3-fold in THP-1 cells in CPF-treated cells relative to the untreated cells (P<0.001), consistent with the significant induction of ferroportin subsequent to CPF treatment (Fig. 2). The level of intracellular LIP was greatly reduced by >2-fold in HepG2 cells treated with CPF compared to the untreated cells (Fig. 5B) (P<0.001), concomitant to hepcidin reduction in these cells following CPF (Fig. 4). These data signified the biological consequences of CPF on iron flow in macrophages and hepatocytes, by modulating ferroportin and hepcidin expression, respectively.

When CPF is uptaken, it may accumulate in various organs, such as liver, kidney, ovary and uterus (36–38), with liver being one of the preferential targets (39). Long-term exposure to CPF results in significant histopathological alterations to liver, including hepatocytic vacuolation, sinusoidal dilation and focal necrosis (40). The potential non-toxic biological effects of CPF on liver, i.e., changes of biological functions without significant cytotoxicity, has been been recognized. Hepatocytes and macrophages, synergistically play a pivotal role in governing systemic iron homeostasis (41). In the present study, we identified a novel effect of CFP treatment on iron flow by altering the iron gene expression in hepatocytes and macrophages. Hepcidin expression was inhibited in HepG2 hepatocytes following CPF treatment, accompanied by reduced LIP, while ferroportin expression was elevated in THP-1 macrophages following CPF treatment, which was associated with LIP reduction.

Reticuloendothelial macrophages are the most important cells for iron storage, as they are involved in aborbing senescent red blood cells to recycle iron for erythropoiesis (42), where ferroportin, as the only known iron exporter, controls iron egress out of macrophages (43). An increased ferroportin concentration enhances iron release and reduces intracellular iron storage, as evidenced by LIP reduction (44,45). In the present study, we demonstrate that CPF exposure increased ferroportin concentration in THP-1 macrophages, and this increase was mainly due to the upregulation of ferroportin transcription. As a result of the ferroportin increase, the available iron content as reflected by LIP was reduced in THP-1 macrophages. By contrast, we identified a reduced hepatic hepcidin expression in HepG2 hepatocytes following CPF treatment, which led to a reduced intracellular iron level as evidenced by LIP reduction presumably due to the hepcidin-induced degradation of ferroportin in hepatocytes. These results suggest that CPF exposure elicited significant changes to cellular iron homeostasis by regulating hepcidin and ferroportin expression in macrophages and hepatocytes. The detailed mechanisms underlying CPF-promoted activity in transcribing ferroportin and CPF-mediated hepcidin repression should be further investigated.

In conclusion, results of the present study have identified a novel finding of CPF in altering cellular iron homeostasis without imparing cell viability. We have demonstrated that CPF exposure significantly altered the expression of central iron genes, i.e., CPF elevates ferroportin expression in macrophages and represses hepcidin expression in hepatocytes, coupled with LIP reduction in macrophages and hepatocytes. A proposed schematic diagram deciphering the mechanisms responsible for CPF-induced alterations to cellular iron homeostasis is presented in Fig. 6.

This study was supported by a grant under the national ‘973’ program (grant no. 2014CB932000) and the National Natural Science Foundation of China (grant no. 21377159). We would like to thank the laboratory members for their great assistance with the experiments and reagents. 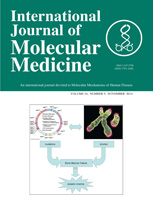