We investigated the cell cycle and apoptotic response to irradiation in 4 human ovarian carcinoma cell lines, i.e., PA-1, Caov-3, SK-OV-3, and ES-2. Cell lines were also analysed for their p53 and Bax expression to address the relationship with cell cycle and apoptotic response. Apoptosis was examined by flow cytometric measurement of annexin V binding and by determination of cytoplasmic histone-associated DNA fragments with a photometric enzyme immunoassay. Cell cycle analyses were performed on the basis of flow cytometry. p53 and Bax protein expression was examined by immunocytochemistry in untreated cells and after irradiation. p53 cDNA sequencing and a functional yeast-based assay (FASAY) were performed to determine the p53 mutational status. All cell lines exhibited a dose-dependent G2/M arrest. No arrest in G1 was seen. A strong correlation was found between the G2/M arrest and the induction of apoptosis. PA-1, the only cell line found to express wild-type p53, showed the highest susceptibility to accumulate in G2/M and the strongest apoptotic response after irradiation. In this cell line irradiation resulted in an unequivocal accumulation of p53 protein and in an increased expression of Bax protein. Caov-3, lacking wild-type p53, showed upregulation of Bax expression after irradiation. Caov-3 proved to be relative sensitive to apoptosis compared to SK-OV-3 and ES-2. These two cell lines were found to be p53 mutated in sequence analysis and irradiation had no effect on the expression of p53. No change in Bax expression was seen in ES-2, while SK-OV-3 exhibited decreased Bax protein levels after irradiation. Our data suggest that the G2/M arrest is an important component of the pathway leading from irradiation-induced DNA damage to apoptosis in the examined cell lines. The G2/M arrest and associated apoptosis found in the examined cell lines does not necessarily require wild-type p53, although wild-type p53 and possibly Bax may contribute to a maximum response to irradiation. Two independent mechanisms, p53-dependent and p53-independent, are suggested in the examined cell lines. 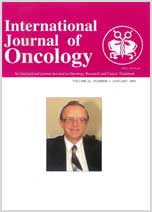