Pristimerin (PM), a quinonemethide triterpenoid, is a promising anticancer agent with potent antiproliferative and apoptosis-inducing activities against cancer cell lines. However, the anticancer activity and mechanisms of PM in prostate cancer cells have not been adequately investigated. Here we report that the degradation of survivin plays an important role in the antiproliferative and proapoptotic effects of PM in carcinoma of the prostate (CaP) cell lines. Treatment with PM inhibited proliferation and induced apoptosis in LNCaP and PC-3 cells as characterized by the loss of cell viability and an increase in Annexin V-binding and cleavage of PARP-1, respectively. The antiproliferative and apoptosis-inducing effects of PM were associated with the inhibition of cell cycle regulatory proteins, antiapoptotic survivin and members of the Bcl-2 family. Data showed that response to PM is regulated by survivin since overexpression of survivin rendered CaP cells resistant to PM. Furthermore, downregulation of survivin by PM was mediated through the ubiquitin-proteasomal degradation. Together, these data demonstrate that pristimerin inhibits proliferation and induces apoptosis in CaP cells by abolishing survivin through the ubiquitin-proteasome pathway.

Carcinoma of the prostate is the most commonly diagnosed cancer in American males and the second ranked cause of cancer related mortality (16). An estimated 233,000 new cases of prostate cancer will be diagnosed and 29,480 deaths are expected to occur from this disease in the United States in 2014 (17). Current therapies (e.g., androgen deprivation, radical prostatectomy, radiotherapy or brachytherapy) while effective in treating localized prostate cancer have limited efficacy against advanced disease and metastatic hormone-refractory disease remains incurable (18–20). Since the incidence of CaP increases with advancing age, prostate cancer is expected to be an increasingly greater problem as life expectancy improves.

In a previous report we have shown that PM induces apoptosis in CaP cell lines through a ROS-dependent Bcl-2 degradation pathway (21). In the present study, we demonstrate that induction of apoptosis in CaP cells by PM is associated with inhibition of cell cycle regulatory proteins and proteasomal degradation of antiapoptotic survivin, a member of the inhibitors of apoptosis (IAP) family.

Tumor cells (1×104) in 100 μl of tissue culture medium were seeded into each well of a 96-well plate. After 24-h incubation to allow cells to adhere, cells were treated with PM at concentrations ranging from 0 to 5 μM. Cultures were incubated for additional 72 h and cell viability was then determined by the colorimetric MTS assay using CellTiter 96 AQueous One Solution Proliferation Assay System from Promega. This assay measures the bioreduction of the tetrazolium compound MTS by intracellular dehydrogenases in the presence of electron-coupling reagent phenazine methosulfate. MTS and phenazine methosulfate were added to the culture wells, and cultures were incubated for 2 h at 37°C. The absorbance, which is directly proportional to the number of viable cells in the cultures, was measured at 490 nm using a microplate reader.

Apoptosis was assessed by the binding of Annexin V-FITC to phosphotidylserine, which is externalized to the outer leaflet of the plasma membrane early during induction of apoptosis. Briefly, untreated cells and cells treated with PM were resuspended in the binding buffer provided in the Annexin V-FITC apoptosis detection kit II (BD Biosciences, San Diego, CA) and allowed to react with 5 μl of Annexin V-FITC reagent and 5 μl of propidium iodide for 30 min at room temperature in the dark. Stained cells were analyzed by flow cytometry using Accuri C6 flow cytometer (Accuri Cytometers Inc., Ann Arbor, MI). The induction of apoptosis by PM was confirmed by the cleavage of PARP-1 by western blot analysis.

For expression of HA tagged-survivin, semi-confluent cultures of PC-3 cells in 60 mm2 cell culture dishes were transfected with 10 μg of empty or HA-survivin expression vector (pcDNA3-HA-survivin) (CH3 BioSystems, Amherst, NY) using Lipofectamine Plus reagent. After incubation for 36 h, overexpression of survivin in transfected cells was confirmed by immunoblotting.

After treatment with PM (5 μM) for 6 h cells were washed with cold PBS and lysed in NP-40 cell lysis buffer (Invitrogen, Camarillo, CA) supplemented with 2 mM sodium vanadate, 5 μg/ml leupeptin, 1 μg/ml aprotinin, 1 μg/ml pepstatinin, and 10 μg/ml 4-2-aminoethyl-benzenesulfinyl fluoride for 30 min on ice. Supernatants were collected after centrifugation at 14,000 × g for 10 min and protein concentration was determined. Each sample (400 μg protein) in 200 μl of antibody binding buffer containing anti-HA antibody was incubated for 1 h at room temperature followed by incubation with protein A agarose beads for 1 h. Immune complexes were washed two times with lysis buffer and analyzed for ubiquitin by western blot analysis.

The effect of PM on proliferation of CaP cells (LNCaP and PC-3 cells) was examined using MTS assay. For this, cells were treated with PM at concentrations of 0 to 5 μM for 72 h and the viability of cultures was determined. As shown in Fig. 1, measurable reduction in viability (~20%) was observed in both cell lines at 0.625 μM PM; however, significant reduction in viability occurred at 1.25 to 5 μM PM (47–73%, p<0.05). Thus, PM reduced the proliferation both androgen-sensitive (LNCaP) and androgen-resistant (PC-3) CaP cells.

Since cell division is regulated by cyclins and cyclin-dependent kinases (cdks) and cdk inhibitors such as WAF1/21 and KIP1/27, we investigated the effect of PM on these cell cycle regulators. For this, LNCaP and PC-3 cells were treated with PM (0–10 μM) for 24 h and levels of cyclin D1, cyclin E, cdk2, cdk4, cdk6, p21 and p27 were analyzed by western blot analysis. As shown in Fig. 2, treatment with PM reduced the level of cyclin D1 and cyclin E in LNCaP cells, whereas only cyclin E was reduced in PC-3 cells. On the other hand, levels of cdk2, cdk4 and cdk6 were reduced in both cell lines in a dose-related manner. Contrary to the inhibition of cyclin D1 cyclin E and cdks 2, 4 and 6 treatment with PM increased the levels of cdk inhibitors p21 and p27. Thus, inhibition of cyclin D1 and E and cdks 2, 4 and 6 suggests arrest of LNCaP and PC-3 cells in G0/G1 cell cycle phase.

Whether inhibition of proliferation of CaP cells by PM leads to induction of apoptosis was investigated next. Thus, LNCaP and PC-3 cells were treated with PM (0 to 5 μM) for 24 h and induction of apoptosis was measured from the binding of Annexin V-FITC by flow cytometry and cleavage of PARP-1 by western blot analysis. As shown in Fig. 3A, only a small percentage of untreated LNCaP and PC-3 cells bound Annexin V-FITC (8 to 12%, respectively). In contrast, the percentage of Annexin V-FITC binding cells (both cell lines) increased in a dose-dependent manner after treatment with PM at 0.625 to 5 μM (LNCaP, 11–32%; PC-3, 19–43%).

Apotosis is regulated by a number of pro and anti-apoptotic cellular proteins belonging to the Bcl-2 and IAP families of proteins. To ascertain the effect of PM on these apoptosis-regulatory proteins we analyzed the levels of some of the more prominent members of the Bcl-2 and IAP families by western blot analysis. Treatment with PM (0–10 μM) decreased the levels of antiapoptic Bcl-2, Bcl-xL and proapoptotic Bax, Bak and Bad in a dose-dependent manner in both cell lines (Fig. 4A). A similar inhibitory effect of PM on the expression of antiapoptotic IAP family members, such as survivin, XIAP and cIAP-1 was observed (Fig. 4B).

Survivin is an IAP family member that plays an important role in cell cycle regulation and inhibition of apoptosis. To examine the relevance of survivin in antitumor activity of PM, we measured the response of CaP cells overexpressing surviving to PM in MTS assay. For this, LNCaP and CaP cells were transfected with survivin expression vector (pcDNA3-HA-survivin) and after confirming overabundance of survivin in transfected cells their response to PM was measured in 72 h MTS assay. As shown in Fig. 5, there was significant reduction in the sensitivity of transfected cells to PM compared to control cells. Transfection with empty plasmid showed no change in response to PM (not shown). These data indicated that survivin plays an important role in the response of CaP cells to PM.

There is intense interest in developing novel agents and treatment strategies to treat hormone-refractory metastatic prostate cancer. We and others have shown that PM exhibits potent antitumor activity against a wide range of cancer cell lines, including prostate cancer cells through multiple mechanisms (6–14,20). However, the significance of survivin, a potent inhibitor of apoptosis and a regulator of cell division in mediating response to PM in cancer cells has not been investigated. Thus, the present study was undertaken to examine the role of survivin in apoptotic cell death of prostate cancer cells by PM. Our results demonstrated the antiproliferative activity of PM both in androgen-sensitive and androgen-refractory prostate cancer cells. This result suggested that the inhibition of tumor cell proliferation by PM may be attributable to cell cycle inhibition. Indeed, PM has been shown to arrest cell cycle in G0/G1 phase in pancreatic cancer cells (21). Cell cycle progression is controlled by cyclins, cyclin-dependent kinases (cdks) and cdk inhibitors. In the present study, although a formal cell cycle analysis was not performed, treatment with PM downregulated levels of cyclin D1 and E in both CaP cell lines. PM also inhibited the expression of cdk2, cdk4 and cdk6 in both cell lines. Cyclin D1 and E in conjunction with cdk2, cdk4 and cdk6 regulate cell cycle progression through G1 phase. Thus, inhibition of cyclin D1 and E and cdk2, cdk4 and cdk6 suggests that PM might inhibit proliferation by arresting prostate cancer cells in G1-phase. Data also suggest that increase in expression of the cdk inhibitors p21 and p27 by PM may also facilitate G1 arrest by inhibiting the activity of cyclinE-cdk2 complexes that promotes G1-S phase progression.

In most instances, inhibition of cell proliferation by anticancer agents forces tumor cells to undergo apoptosis. PM increased Annexin V binding and cleaved PARP-1 in both cell lines indicating induction of apoptosis. This result corroborates our previous findings demonstrating induction of apoptosis by PM in epithelially-derived ovarian and pancreatic cancer cells via the inhibition of antiapoptotic (prosurvival) signaling molecules such as Akt, NF-κB and mTOR (14,20). In these tumor systems, induction of apoptosis involved cleavage of caspases-8, -9 and -3, loss of mitochondrial membrane potential and generation of free radicals supporting results of studies reported by others.

cIAP-1, XIAP and survivin are members of the inhibitor of apoptosis family of proteins (IAP) that block apoptosis by blocking activation or neutralizing the activity of caspases 3, 7 and 9 (23,25). cIAP-1 interferes with the activation of caspases, whereas XIAP binds to and inhibits caspase 3, 7 and 9. Survivin also inhibits caspase activation. Treatment with PM reduced the expression of these IAP members in prostate cancer cells, thereby contributing to the induction of apoptosis by PM.

Besides inhibiting apoptosis, survivin also regulates cell division and cytokinesis (26,27). Survivin is only expressed in the G2-M phase and during mitosis it localizes to the mitotic spindle by interaction with tubulin. Because of the prominent role survivin plays in the inhibition of apoptosis and regulation of cell division, we investigated the significance of survivin in mediating response to PM and the mechanism by which PM down-regulates its expression in CaP cells. The former was addressed by evaluating the response of tumor cells expressing abundance of survivin. Overexpression of survivin increased the resistance of tumor cells to PM (Fig. 5), implicating survivin in mediating the response to PM.

The degradation of proteins by 26S proteasome requires ubiquitination of target proteins through addition of multiple ubiquitin moieties at lysine residues. To confirm the involvement of proteasomes in PM-induced degradation of surviving, we analyzed ubiquitin-survivin complexes in tumor cells treated PM in the presence of proteasome inhibitors MG132 and lactacystin or calpain inhibitor MG101. Treatment with PM in the presence of MG132 or LAC resulted in accumulation of polyubiquitinated survivin products compared to treatment with PM alone. On the other hand, treatment with PM in the presence of MG101 did not cause accumulation of polyubiquitinated survivin. Taken together, these data demonstrated that downregulation of survivin by PM is mediated through the ubiquitin-proteasome degradation pathway. Thus, understanding the role and mechanism by which PM downregulates survivin may facilitate development of PM for the prevention/treatment of prostate cancer.

This study was supported by NIH grant 1R01 CA130948 from the National Cancer Institute. 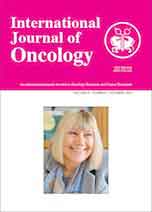