We report the case of a 10‑year‑old girl with a soft tissue aneurysmal bone cyst (STABC) located in the posterior aspect of the left shoulder. Conventional radiography revealed an oblong mass with a calcified rim. On the computed tomography scan, the lesion appeared to have a non-uniform intralesional density with an incomplete rim. Magnetic resonance imaging revealed a multi‑cavity lesion with fluid‑fluid levels. Following pathological examination, the lesion was diagnosed as a STABC. This may be only the twentieth reported case in the English literature of this extremely rare benign tumor occurring in soft tissue. Eight months after surgery the patient was assessed at our outpatient clinic and found to have excellent mobility of her left shoulder and no sign of recurrence.

An aneurysmal bone cyst (ABC) is a benign, locally aggressive and expansile tumor that typically occurs in the long bones or vertebral bodies of children and young adults. Radiographically, a lytic lesion and expansion are the basic characteristics of ABC, which usually has well-defined margins. Histologically, the tumor contains blood-filled cystic spaces separated by fibrous septa containing osteoclast-type giant cells, fibroblasts and reactive woven bone (1,2).

Previously, ABC was believed to occur exclusively in bone (3), but in recent years a few cases of soft tissue ABC (STABC) have been reported (1,4–7). STABC is a recently recognized extremely rare tumor with fewer than 20 well- documented cases in the literature (7), as shown in Table I. We report the imaging and pathological findings of a STABC in a 10-year-old girl and discuss its differential diagnosis.

The study was carried out according to the principles of the Declaration of Helsinki; informed consent was obtained and Shanghai Ninth People's Hospital Ethics Committee approved the study. The patient images contained in this article were captured by a hospital-based photographer at Shanghai Ninth People's Hospital, Shanghai Jiao Tong University School of Medicine (8). Permission to use these images in this study has been obtained from the parents of the girl who participated in this study.

A 10-year-old girl presented with a one-month history of pain in her left shoulder. She was admitted to hospital as the pain had increased over the previous 10 days, affecting the mobility of her left shoulder. Her parents denied any trauma to the area. Physical examination revealed a 6×5-cm painful lump in the posterior aspect of the left shoulder; the lump was solid, smooth and non-pulsatile. Shoulder mobility was limited; initiative outreach was <80°, extension was <30°, and anteflexion was <30°. There were no signs of inflammation, and the white cell count was 5.8×109 cells/l. Serum electrolytes were normal.

Radiography indicated a round soft tissue lesion with a well-defined calcification margin located at the posterior aspect of the left shoulder, next to the scapula and proximal humerus. The adjacent bony structures were not involved, and there was no significant periosteal reaction on these bones (Fig. 1A). Computed tomography (CT) revealed an abnormality of the soft tissue in the left shoulder with an arcuated thin rim with an ambiguous density, suggesting calcification (Fig. 1B). The intralesional density was slightly uneven (Fig. 1C).

Magnetic resonance imaging (MRI) revealed a rectangular 5.9×4.6-cm soft tissue lesion in the posterior aspect of the left shoulder with an uneven intralesional signal. On T1-weighted MRI, the lesion showed an overall signal intensity (SI) similar to that of the surrounding normal muscles. The SI of the intralesional septa appeared a little higher than that of the separated areas (Fig. 2A). By contrast, the mass showed a predominantly high SI with a well-defined margin on T2-weighted MRI; the SI of the intralesional septa had a low to intermediate SI, while the separated areas were of high SI (Fig. 2B). Fluid-fluid levels were also observed in our patient (Fig. 2C). Following administration of gadopentetate dimeglumine, the lesion manifested peripheral and intralesional septa enhancement, while the separated areas were not significantly enhanced (Fig. 2D). MRI further demonstrated that the scapula and proximal humerus were not involved and the sclerotin was normal.

The mass was subsequently completely excised under general anesthesia. Intraoperatively, we found that there was no relationship between the tumor and the adjacent bones and the mass was mainly located between the infraspinatus muscle, teres major muscle and tere muscle (Fig. 3A). On gross inspection, the specimen was a rectangular 8.8×5.7×4.6-cm soft tissue mass (Fig. 3B), the exterior of which consisted of a rim formed partly of fibrous tissue with areas of a thin eggshell-like layer of bone (Fig. 3C). The center of the lesion consisted of irregular blood-filled cavities separated by septa of varying thickness (Fig. 3C). Microscopically, the lesion was composed of cystic blood-filled spaces. The cyst walls contained fibroblasts, inflammatory cells, multinucleated giant cells and reactive woven bones (Fig. 4).

ABC is a type of benign lesion that may occur in any bone, but rarely in soft tissue. It occurs predominantly during the first two decades of life. An ABC is composed of numerous irregular cysts filled with blood and separated by connective tissue septa containing fibroblasts, osteoclast-type giant cells and reactive bone (1,2). It usually appears on radiographs as an eccentric lytic and expansile lesion with a well-defined margin within bones (1).

ABC was first described by Jaffe and Lichtenstein in 1942 (9). Its development has been widely regarded as a reactive process since then. However, it is recognized that there is no previous lesion in the majority of cases of this disease. Panoutsakopoulos et al (10) demonstrated the presence of a chromosomal translocation t(16;17)(q22;p13) in two osseous cases, suggesting a neoplastic process. These initial findings were later confirmed by several subsequent cytogenetic studies (11,12). Oliveira et al (13) reported that the t(16;17)(q22;p13) translocation fuses the promoter region of the osteoblast cadherin 11 gene (CHD11) on chromosome 16q22 to the entire coding sequence of the ubiquitin protease USP6 gene. Ye et al (14) showed that the overexpression of USP6 in pre-osteoblastic MC3T3 cells is sufficient to drive the formation of tumors that reproduced the molecular and histological features of ABC. These authors also suggested that USP6 may play a direct role in establishing a degradative and vascularized microenvironment. Five partner genes known to upregulate USP6 expression in ABC have been identified: CDH11(16Q22), ZNF9(3Q21), OMD(9Q22), COL1A1(17Q21) and TRAP(1P34) (15). In addition, Geiersbach et al (16) reported an ABC case with an SS18 rearrangement, which has not previously been described. These findings clearly demonstrate that ABC is a neoplastic disease.

STABC is extremely rare. The number of published STABC cases does not exceed 20, with only a few epidemiological and histological reports (7). Of these cases, only 5 are in the pediatric age group, as shown in Table I. Our patient is a 10-year-old girl with a lesion in the posterior aspect of the left shoulder. STABC shows a rather similar appearance to its osseous counterpart on radiography and MRI (4). In our case, plain radiographs revealed a rectangular lesion with a fuzzy image of non-uniform density in the center, when observed carefully. Although the peripheral rim was not as clear as described in previous cases, the specific features of ABC on MRI, including an expansile lesion surrounded by a thin low- signal rim, increased signal with augmented T1-weighting and a lobulated contour with fluid-fluid levels were all clearly visible in our patient. The MRI presentation of our case may be described as relatively typical.

Differentiation between STABC and EOS is essential as they require completely different management and have different outcomes. EOS most commonly affects individuals older than 30 and is rarely encountered during the first two decades of life (17). EOS differs from STABC in that it usually has an ill-defined rim on X-rays and is more prone to becoming malignant. Microscopically, anaplastic tumor cells and atypical mitosis may be found in EOS, which do not exist in STABC.

In conclusion, STABC is an extremely rare type of benign soft tissue tumor, with no more than 20 cases having been reported in the English language literature. It is occasionally secondary to lesions such as giant cell tumor, myositis ossificans and conventional osteosarcoma, therefore caution should be used in the diagnosis of STABC. If STABC is correctly diagnosed, surgical treatment should be implemented with complete excision considered the most appropriate treatment.

This study was supported by the National High Technology Research and Development Program of China (863 program)(grant no. 2009AA03Z311), the National Natural Science Foundation of China (grant no. 81071472) and the Key Disciplines of Shanghai Municipal Education Commission (grant no. J50206). 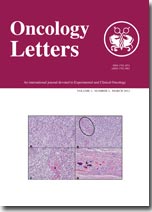